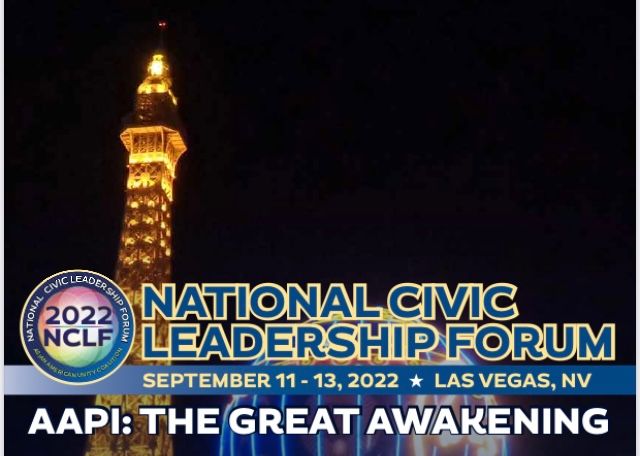 Rep. Pramila Jayapal to be honored at the event, where speakers include Aziz Haniffa, Suhag Shukla, Islam Siddiqui and Thomas Abraham.

The celebratory theme of the conference is “The Grear Awakening of Asian Americans and Pacific Islanders.”

Haniffa, who after his 38-year-long stint with India Abroad, which shut down in its 50th year of publication in March 2020, after a year-long sabbatical has co-founded and is executive editor of the newly minted DesiMaxTV.com, an Indian American and South Asian American streaming platform, will deliver the final keynote at the three-day conference on the “Importance of Independent Media.” He will also host a fireside chat titled “All in the Family” with the trailblazing Tom family of Ron Tom, wife Maeley Tom and daughter Stephanie Tom, whose years of public service and contributions to the Asian American community has helped to empower it in both the public, political and private sector circles.

A breakout panel on Developing Political Skills, will also feature Haniffa, Siddiqui and Chanpone Sinlapasai, a judge at the Multnomah County Circuit Court in Oregon.

Shukla and Jack Hanna, a board member of the New Portland Foundation, will lead a discussion on how to Develop a Common AAPI (Asian American and Pacific Islander) Civic Agenda.

The opening panel at the conference on “The Past, Present, Future of AAPI Civic Engagement” will feature leaders from six different ethnic and religious backgrounds.

The plenary sessions will also include showcasing the AAUC signature initiative: the AAPI Community Hub project under development — a web-based, map technology tool to unite the fragmented, siloed AAPI communities — and a working session on developing the joint statement of a common AAPI Civic Agenda.

At the gala banquet on the second day, two special awards commemorating two past Asian American political giants — former U.S. Congressman and Commerce and Transportation Secretary respectively in the Clinton and George W. Bush administrations Norman Mineta and Dilip Singh Saund, the first-ever Indian American U.S. Congressman — will be presented to Maeley Tom and U.S. Rep. Pramila Jayapal, Washington state Democrat and chair of the Progressive Caucus in the U.S. House of Representatives, for being leaders exhibiting outstanding public service and political leadership.

Other awards recognizing outstanding community service, philanthropy, and youth leadership will also be presented during the awards dinner gala on September 12. Among the president’s awardees for Young Asian/Pacific Islander Americans are two Indian Americans: Suraj Kulkarni, 19-year-old founder and creative director at Only Being You, a non-profit that aims to empower minority voices through sharing stories, and Vivek Pandit, a Class of 2020 alumnus of Brown University and the co-founder of PeduL, a diversity recruiting start-up that helps underrepresented students find internships and scholarships at top corporations around the country.

The other awardee is Nadia Siddiqui, an undergraduate teaching assistant at the University of Washington, who has volunteered with Rohinga Refugees and the Hope Foundation.

A pre-conference event featuring the first attempt of a Youth Program organized by AAPI youth leaders across the country to attract youth participation in civic leadership will take place on September 11 as a half-day program.

“We are creating an in-person conference with all the bells and whistles and fanfare,” said AAUC President and NCLF event Chair Dr. SK Lo, adding that AAUC is utilizing the digital platform and event app Whova to organize the 2022 NCLF.

Dr. Lo said that AAUC believes that the AAPI community is no longer a passive, silent minority and argued that civic engagement is an important ingredient to become part of the integrated fabric of the USA. “We need to capture this awakening momentum to create the change we all desire, ” she said.

In her welcoming message, Lo said: “This year, we welcome attendees across the country. From Alaska to Florida, and from New England States to California your presence represents our diverse Asian American Pacific Islander (AAPI) communities. It is the long-term goal of our forum to forge unity among our diverse communities and to speak with One Voice. Thus, we have the power to change the environment for our communities and to live our collective American Dream. It is our hope that through this Forum we are able to find the One Voice that unites rather than divides us!”

She adde: “Individually, AAPIs are quite successful in many different professions,” she said, “However, we have long been stereotyped as the “perpetual foreigners” and the silent, passive minority. It is the great awakening to see ourselves as an integral part of American society that we all belong here. We should not be silent anymore and wholeheartedly take on our civic responsibility and actively engage in civic affairs to have a strong voice.”

Lo said, “We have drafted a joint declaration on our Common Civic Agenda for all AAPI organization leaders to consider and share widely with their communities. We need to create the change we want to see in the U.S. at all levels of government from school boards to the federal levels.”

AAUC came into existence through the historic conference held in Alaska in 2018 in which 12 unique AAPI organizations and 20 leaders representing five major ethnicities — Chinese, Indian, Filipino, Korean and Japanese Americans — were present. Through the annual in-person/virtual National Civic Leadership Forum, AAUC has now connected more than 20 ethnic groups and 90 plus organizations. Other ongoing signature programs of AAUC, include its monthly podcast on “Building our Collective American Dream” and the web-based AAPI Community Hub project to connect all AAPI nonprofit organizations.