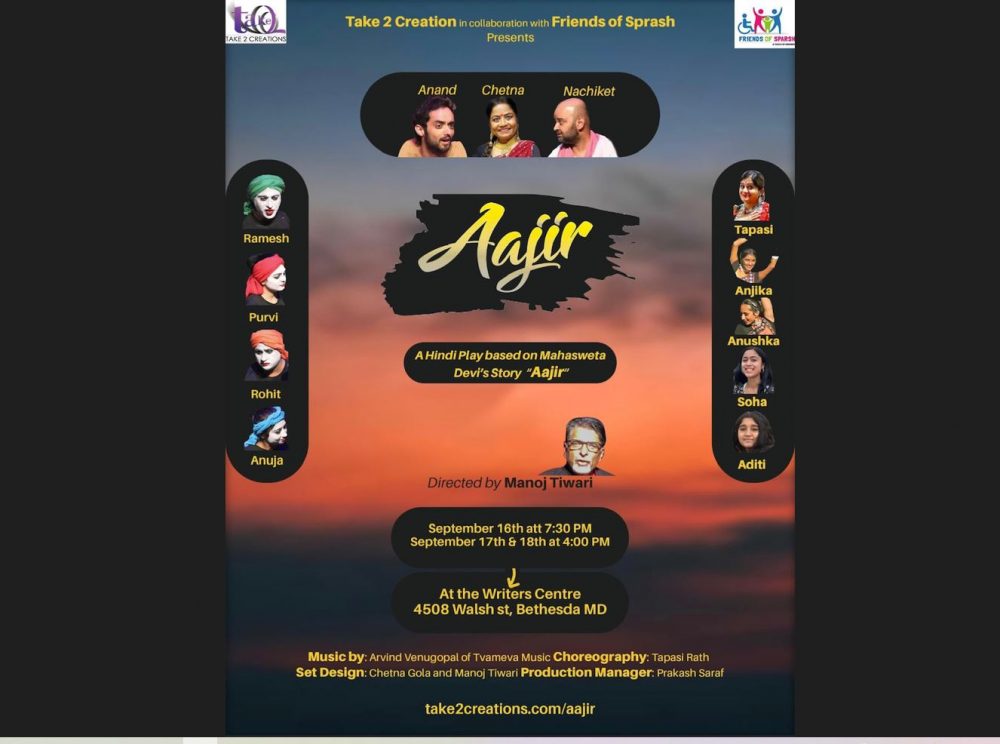 The play explores a question we don’t dwell on enough – what creates bondage for us?

Washington area residents were in for a theatrical treat during the Sep 16-18 weekend as Take 2 Creations, in partnership with Friends of Sparsh, presented their latest artistic endeavor, a Hindi musical dramatic play – ‘Aajir.’

Based on a story by the legendary Mahasweta Devi, the production brought to the fore a question many of us do not dwell on enough – what creates bondage for us? Often times, we think of bondage only as something related to slavery, but the reality is that all of us are bonded by something.

Whether it be a thought, a way of life, an obligation or a relationship, we are frequently confined to do things a certain way within the parameters of something important in our life without questioning why, sometimes at the cost of our happiness. This central theme is what drives the plot of ‘Aajir.’

Without going into too much detail, ‘Aajir’ tells the story of two key characters bonded independently by the circumstances of their lives. While one character is the neglected wife of a rich man struggling to find happiness and completion in her relationship, the other character is shown as a man trapped in the societal ills of caste, poverty and servitude.

How these two characters deal with these circumstances surrounding their lives and reveal the central message of the play through their stories, forms the crux of the narrative.

Veteran theater director Manoj Tiwari has superbly helmed this production, not only by adapting a crisp script, but also by weaving together excellent performances with unique artistic expression.

For each dramatic scene in the play, there is juxtaposition with musical interludes and dance pieces that emphasize the core situations and messages of the play.

In my 27 years watching plays in the Washington area, I have not seen such a beautiful merging of story, music and dance. Although it has a contemporary presentation, it reminds viewers of the plays of yore that had musical interludes driving the plot.

The usage of several mysterious characters with painted white faces and shadowy clothing presenting the ominous occurrences of the play remind audiences of a Shakespearean style not seen often in today’s plays.

In terms of performances, each actor immerses themselves in their respective roles. Chetna Gola as the neglected wife and Anand Jain as the down on his luck innocent servant capture wonderfully the conflicts that bind the journeys of their characters. Every transition in facial and verbal expression is seamless by these leading actors.

Nachiket Dharker delivers a powerful performance as the arrogant, chauvinistic “zamindar,” and spells menace and terror every time he enters the stage. His intonation and dialogue delivery add to the audience’s rage at his behavior and sympathy for Chetna and Anand’s characters.

Each of the other actors and dance performers in the play — Anuja Uttarwar, Rohit Agarwal, Purvi Patki, Ramesh Chintagumpala, Tapasi Rath, Anushka Agarwal, Anjika Singh, Soha, Aditi — are excellent in their roles and bring freshness to the production as most of them are new faces to the Hindi theater scene in the national capital region. Audiences will look forward to seeing more of them on the stage in the coming days!

Music by Arvind Venugopal of Tvameva Music was ethereal, modern and mood evoking. It captured the tone of the play through its various shades and flows.

Choreography by Tapasi Rath was stellar and added a unique touch to the flavor of the play, as did the sets by Chetna and Manoj. No play is complete without proper management backstage and full credit of this must be given to Prakash Saraf.

All in all, ‘Aajir’ was one of the most uniquely presented plays I have seen in Washington area in recent times. Here’s hoping we see more such meaningful and unique productions in the future that present theater in non-traditional ways.