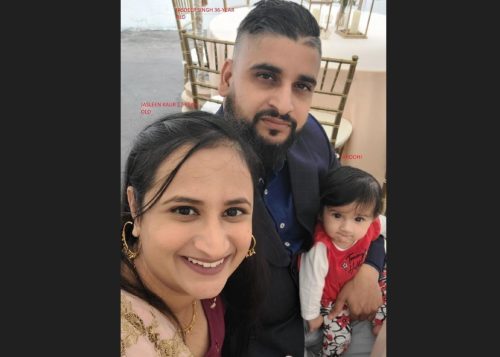 Missing family includes an 8-month-old baby; a “person of interest” taken into custody

An Indian American family of four in California is still missing two days after being kidnapped even as police took a 48-year-old man considered a “person of interest” in the case into custody.

Authorities are working to confirm the man they have in custody is the same suspect they released photos of on Monday, the Merced County Sheriff’s Office said Tuesday.

The missing family includes 8-month-old Aroohi Dheri, her parents Jasleen Kaur and Jasdeep Singh as well as the child’s uncle Amandeep Singh, it said in a statement on Facebook.

The family is believed to have been “taken against their will” while at a business in the 800 block of South Highway 59 in Merced, which is in central California between Modesto and Fresno.

“We have no motivation behind it. We just know they are gone,” Merced County Sheriff Vern Warnke said in a video message posted on Facebook.

A vehicle owned by one of the family members was found on fire late Monday, which led law enforcement to determine that the four had been kidnapped.

“We’ve got evidence to indicate that the individuals involved in this destroyed evidence in an attempt to cover up their tracks,” Warnke said.

The sheriff implored people to come forward with any information they may have related to the kidnapping, saying there has been no known contact for ransom.

“It’s imperative that we get some information on this,” Warnke said. “People are going to be working 24 hours on this until we get a break.”

Before law enforcement involvement, the 48-year-old “attempted to take his own life,” and is currently in “custody, receiving medical attention and in critical condition.”

The suspect is described as a man with a shaved head and was last seen wearing a hooded sweatshirt, the sheriff’s office said. He is considered armed and dangerous, officials added.

“Investigators continue to follow up on all leads and are working diligently to find the family,” the sheriff’s office stated Tuesday.

Read: Indian-Origin Family of 4 Kidnapped in California, Kin in Punjab in Shock (October 5, 2022)

“We continue to ask for the public’s help with any information that may assist us in locating the family’s whereabouts. If you have any information regarding this incident or the whereabouts of the victims, please call our tip line at 209.385.7547,” it said.

“During the primary investigation, Detectives determined that the individuals were kidnapped,” the sheriff’s office stated. “The Federal Bureau of Investigation and the California Department of Justice have joined the investigation.”