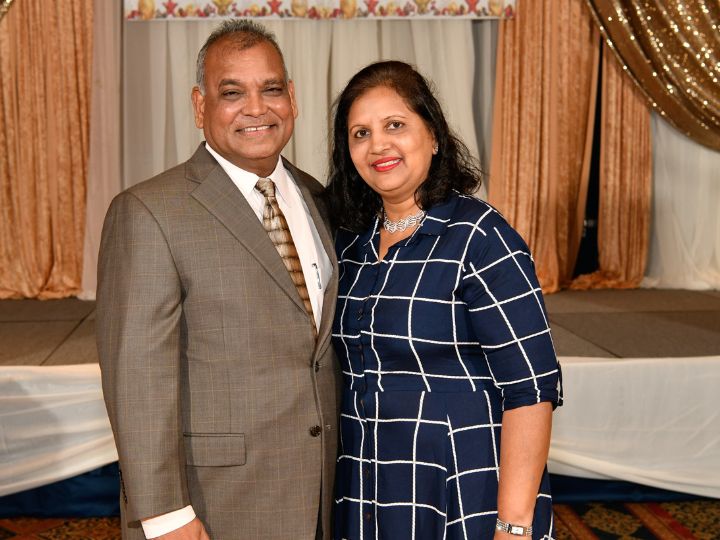 Giving back in a big way, University of Houston alumnus Brij Agrawal and his wife, Sunita, have pledged $1 million to fund manufacturing laboratory equipment at the UH College of Technology building in Sugar Land.

In recognition of the Indian American couple’s generosity, the building’s ground floor auditorium will be named the Brij and Sunita Agrawal Auditorium, according to a UH press release.

Brij Agrawal graduated from UH’s Cullen College of Engineering in 1988 with a degree in mechanical engineering, and quickly made a name for himself as the founder of numerous successful companies in manufacturing, fabrication and fast-casual restaurants.

He is the chief executive officer and president of VKC Group which operates more than 150 restaurants in Texas, Colorado and New Mexico.

Born in Lakhanpur, India, Agrawal moved to Houston at 17 and attended night school at UH while working full-time. He credits his experience at UH for providing him the foundation to launch and sustain a successful career, and hopes his family’s investment will do the same for students in the Fort Bend County area. The Agrawals are longtime Sugar Land residents.

“I would not have graduated from college if it wasn’t for the UH System. That is why I am so passionate about supporting UH. I live in Sugar Land and that makes me more attached to the UH at Sugar Land campus.” said Brij Agrawal.

“I am thrilled to know the impact this gift will have on the students and faculty in terms of access to state-of-the-art equipment in a modern academic building and campus in Sugar Land,” he added.

The gift will fund the purchase of the latest 3D printers, machine tools and measuring test equipment, and the creation of an advanced manufacturing design center focused on small and medium scale industry, according to the press release.

Advanced manufacturing, or the use of innovative technologies to create new and existing products, is a key goal for the Advanced Technology and Innovation Center at UH at Sugar Land, an instructional site of the University of Houston.

“I am grateful to Brij and Sunita Agrawal whose generosity will enhance the educational experience for our students and researchers to help create the next generation of technology innovators,” said Renu Khator, University of Houston’s Indian American president.

“Having access to state-of-the-art lab equipment is critical to building the skills necessary to excel in today’s rapidly developing technology workforce.”

The gift’s total impact could reach $3.5 million after matching gifts from the George Foundation, which will match $1 million, and the Texas Research Incentive Program (TRIP), the release noted.

The Agrawals have been loyal supporters of the University for decades, also offering financial support for the construction of the first building at UH at Sugar Land. In addition, they established a Presidential Endowment to fund scholarships for UH engineering students. Brij Agrawal received the distinguished alumnus award from Cullen College in 2007.

“UH at Sugar Land continues to expand its already impressive presence in Fort Bend County and the continued support from families like the Agrawals is critical to keep the momentum going,” said Eloise Brice, vice president for University advancement.