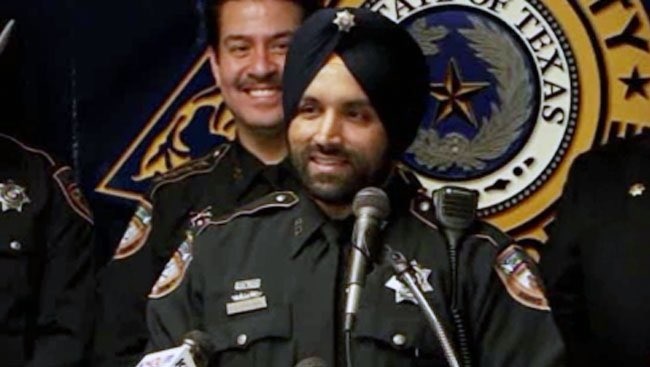 A man convicted of killing Sandeep Dhaliwal, the first turbaned Indian-American Sikh police officer in Texas, during a traffic stop in 2019, has been sentenced to death.

A jury in Houston announced the verdict to sentence Robert Solis,50, to death Wednesday, nearly 10 days after he was found guilty of killing Harris County Deputy Dhaliwal, according to Sheriff Ed Gonzalez.

Solis showed no emotion as the sentence was read. Jurors deliberated for just 35 minutes before recommending the death penalty in the punishment phase of the trial. They deliberated for 25 minutes in the guilt phase.

“Verdict is in: Jurors sentence Robert Solis to death. We are extremely grateful that justice has been served,” Harris County Sheriff’s office tweeted.

“Sandeep changed our Sheriff’s Office family for the better, and we continue striving to live up to his example of servant leadership. May he Rest In Peace.”

“On September 27, 2019, Deputy Sandeep Dhaliwal was fatally shot while conducting a traffic stop. He was known for his sense of humor and ability to make personal connections with his fellow deputies and the community he served,” it said in another tweet adding, “Gone but never forgotten.”

A week before his sentencing, Solis chose to represent himself in court and told jurors he had accidentally shot Dhaliwal.

“The defendant executed a uniformed deputy by shooting him in the head in broad daylight,” Harris County District Attorney Kim Ogg said in a statement. “That makes him the worst of the worst, which is why we asked jurors to sentence him to death.”

The sheriff’s office said Dhaliwal, 42, the first Sikh deputy of the Harris County Sheriff’s Office, was conducting a traffic stop on Willancy Court near West Road when a male suspect approached from behind and shot him multiple times. He was taken to the hospital, where he later passed away.

Solis was taken into custody and charged. In December 2019, Solis was indicted by a grand jury for the capital murder charge.

Jurors saw multiple angles of the shooting and heard from 65 prosecution witnesses, who testified about a criminal history that goes back more than 30 years.

But prosecutors argued Solis deliberately shot Dhaliwal because he didn’t want to go back to jail. At the time of the traffic stop, Solis had a warrant for violating parole, CBS News reported.

During his closing argument, his last chance to address jurors, Solis merely said, “The only thing I have to say is that it’s your decision to make. My life is in your hands,” KTRK-TV Houston reported.

Solis asked for several delays during the trial. He told the judge he was sick, and also said he had not been given proper time to prepare.

His behavior throughout the trial stands in direct contrast to the life and legacy of Dhaliwal, who is survived by his wife and three children.

“Anybody I talked to, they say, ‘I wish we had a Dhaliwal at this time. How many people get justice today? How many families?” Dhaliwal’s older sister, Harpreet Rai was quoted as saying.

“We should all aspire to be a Dhaliwal. He left such a legacy. He was a humanitarian and he helped so many beyond his work,” Sheriff Ed Gonzalez said.

Just moments after Solis received the death sentence, a teenager gave a victim’s impact statement, speaking directly to Solis. “You’re a nobody, Robert. You’re the least powerful person in this room,” she told the court.

Dhaliwal made national headlines when he was allowed to grow a beard and wear a turban on the job.

A post office in west Houston has been renamed in his honor. A year after his death, a portion of Beltway 8 near Highway 249 was also renamed after him.