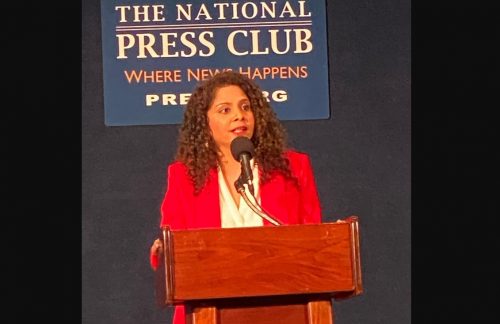 The opinion columnist with The Washington Post “gave the room a sense of what it is like to be a journalist in India in 2022” as she was conferred the award at the 2022 Fourth Estate Award Gala on Wednesday, wrote Bill McCarren calling it an “Unforgettable moment.”

“This evening I received the John Aubuchon honour in a room full of the country’s finest. I dedicated the award to Shirin Abu Akhleh and to every single journalist fighting an isolating battle. History will be kind to us. Thank you,” she tweeted.

In her acceptance speech, Rana Ayyub said that there is no free press in India anymore. “I’m here, trying to feel less alone at a time I feel very lonely” she added. “I happen to be a Muslim & a woman. How dare I speak? … Thank you for making me feel less alone & isolated.”

“Ayyub’s courage and skill in investigative work has been evident throughout her distinguished career and her criticism of the government has been met with an unwelcome assault on her rights and freedom of expression,” National Press Club President Jen Judson and National Press Club Journalism Institute President Gil Klein had said announcing her name for the award earlier this year.

As an investigative journalist working with Tehelka, a Delhi-based investigative and political news magazine, Ayyub took up a project to conduct a prolonged sting operation aimed at snaring politicians and government officials of Gujarat and get them to reveal any potential cover-ups regarding the Gujarat riots of 2002.

In her book Gujarat Files: Anatomy of a Cover Up, Ayyub documented the verbatim transcripts of recordings, made using a concealed recording device, of many bureaucrats and police officers of Gujarat.

The ‘Citation of Excellence’ was conferred to Rana Ayyub in the 2017 edition of the Global Shining Light Award for her undercover investigation revealing state’s top officials’ complicity during the 2002 Gujarat Riots.

In 2018, Ayyub was awarded the Most Resilient Journalist Award by Free Press Unlimited for continuing her work “despite being harassed both online and offline and receiving death threats.”

In February 2020, Ayyub was awarded with McGill Medal for journalistic courage at University of Georgia’s Grady College. She is the 2020 Voices of Courage and Conscience Awardee from the Muslim Public Affairs Council of America.

She has also been named by Time magazine among ten global journalists who face maximum threats to their lives.