US, other nations primarily responsible for climate crisis should address inequalities: Van Hollen 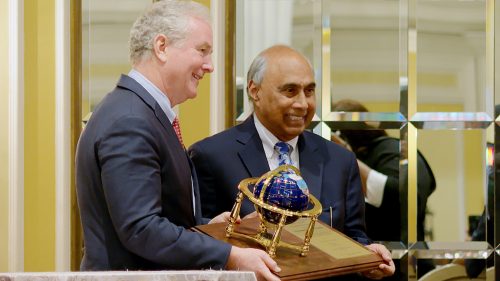 The US senator and four others honored at the 31st International Salute to the Life and Legacy of Dr. Martin Luther King, Jr. breakfast celebration.

The United States and other countries “that have been primarily responsible for the release of carbon emissions and climate change” should do their “very best to address the inequities and harm imposed” on countries that contributed very little to climate change, U.S. Sen. Chris Van Hollen said Sunday.

The junior senator from Maryland was speaking at the 31st “International Salute to the Life and Legacy of Dr. Martin Luther King, Jr. Breakfast Celebration,” where he received the “King Legacy Award for Leadership in Government and Public Service.”

The Democrat was one of the five distinguished Americans from different fields honored at the event, held at the Willard Hotel in Washington, DC.

More than 60 members of Washington’s diplomatic corps, including ambassadors of over a dozen countries, attended the award ceremony. The honorary chair this year was Pakistani Ambassador to the United States Masood Khan.

The awards ceremony, part of commemorative celebrations in honor of King during the late civil rights leader’s birthday weekend, is hosted by the Institute for the Advancement of Multicultural & Minority Medicine. The mission of IAMMM is to eliminate health disparities by developing strategies and addressing issues, and its leadership and membership includes scholars, clinical and scientific researchers, elected officials, community activists and philanthropists, among others.

The message of King “is a universal message,” said Van Hollen, who was sworn into serve his second term in the U.S. Senate earlier this month.

Pointing out “the influence Mahatma Gandhi had on the thinking of Dr. King,” the senator —who was born in Pakistan and went to school in India, as the son of a foreign service officer — said that it was the duty of everyone to take on “the commitment to realize” the civil rights icon’s dream “of equal rights and equal justice, and equal opportunity” in the United States and “also to apply that universal idea around the world.”

“When Dr. King says that injustice anywhere is a threat to justice everywhere, he is not just talking about the United States, he is talking about the world,” the senator said. “And we all have a responsibility in a very messy world to do our very best to stand up for human rights and justice, not only when it is politically convenient, but across the globe, applying those standards … not just to our foes, but to our friends (as well.)”

Quoting King, Van Hollen spoke about the injustices on many fronts, including in environmental and healthcare arenas. “And of course, those around the world who are most vulnerable are those who are most harmed by climate change,” he said citing recent floods in Pakistan, which killed more than 1,700 people.

“It is really important that whether it is in Pakistan or other places around the world, the United States and other countries that have been primarily responsible for the release of carbon emissions and climate change do our very best to address the inequities and harm imposed on countries around the world who contributed very [little] to climate emissions,” he said to a loud applause.

Highlighting the Covid-19 pandemic, Van Hollen spoke about the need to reduce disparity in health care in both the United States and around the world.

The award was presented to Van Hollen by prominent Indian American philanthropist Frank F. Islam, who also introduced the senator.

“The senator has spent his career in service to the public and making government more effective and responsive to the needs of the citizens of Maryland and the United States,” said Islam, a prominent Democratic Party donor.

“That philosophy and approach has enabled him to be a difference maker as a legislator and a leader both within the state of Maryland and at the national level.  His record of public service speaks for itself.”

Quoting King, who said “A man should do his job so well that the living, the dead and the unborn could do it no better,” Islam said the senator “has done his job so well,” and “as a result this country and the world is a better and fairer place for all.”

Islam himself is a previous recipient of the award. He received the “King Legacy Award for International Service/Civic Engagement” in 2015

In addition to Van Hollen, the following individuals were honored at the event:

Pamela Freeman Fobbs, who until recently served as a Personnel Commissioner for the State Center Community College District, was the mistress of ceremonies.