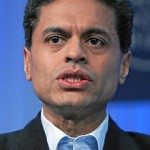 In a topsy turvy world, where developed nations are more in debt than the developing nations, Zakaria discusses the economic and political crisis that American finds itself in.

Studies show that the political divisions in Washington are at their worst since the years following the Civil War. Twice in the last three years, the world’s leading power — with the largest economy, the global reserve currency, and a dominant leadership role in all international institutions — has come close to committing economic suicide.