The Indian Railways is an embarrassment, to say the least. 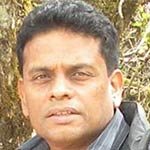 NEW DELHI: Years of neglect and under investments has made the Indian Railways, the largest network in Asia, an embarrassment to say the least.

It had almost become the relic of the past, a British implant in 1853 when they ran an ‘’experimental’’ Bombay to Thane steam loco a distance of 34 Kms. Although since then the Indian Railways (IR) never looked back, its performance ever since has been nothing worth writing about. The conditions of the trains, the stations, the tracks, the catering services and the quality of the food to name a few has been pathetic.

It would make not only the British predecessors squirm in their graves but for the millions of Indians today – for whom it is the only life–line for decades after independence as a massive majority of them have not seen an inside of aero-plane, leave alone flying – the Railways had become a necessary evil which cannot be discarded for the simple reason of not having any alternate.

So many of us have to grin and bear it, take it in our stride, blame it on our past karma and at best enjoy the ride and only think of it as a means to an end, of course a better end, I mean the destination– a sweet destiny, where your travel ordeal on the rail would finally end…for the time being.

Some of us may brighten up to know that the railways in India today runs on 63,028 km of tracks with 11,000 trains zipping every day of which 7,000 are passenger trains, a far cry from the 90 Kms. when it was introduced.

There is a surfeit of reports and complaints against the railways, the usual lot on timings and late arrivals are child’s play compared to these—like food being stored in toilets of running trains, washing utensils in passenger washbasins and stale food dished out to the hapless traveler who just do not have a choice.

Of Railway employees transforming themselves as touts, selling tickets at exorbitant prices, be it the humble travelling ticket examiners (TTEs) or the men at the pantry who are notorious to discard their uniform to cook in their inner garments…the incidents are infinite…not to speak of rapes and violence and killings and lootings on those 60,000 odd kilometers.

And you never will ever get a ticket if you intend to go off for some exigency of marriage, birth or death, not to speak of getting the sudden urge for wander lust to travel. Leave alone the queues and the morose looking booking clerks resembling nothing but poor caricatures of robots in the counter, the smarter ones amongst us when they go for online ticketing too would get frustrated and disappointed with servers crashing and cyber touts bulking up their quotas.

According to railway data, collisions, derailments, fires and unprotected crossings have taken more than 2000 lives in nearly 800 accidents in the past seven years alone. India’s neighbor China, a constant benchmark for India, has its fastest train run at a breezy 300 km per hour while India’s top speed plateaued at 151 km per hour.

Today, the Narendra Modi led NDA government has realized all this and more. Although the deliverability is yet to be seen the government has already moved in the right direction. To attract capital and technology to the cash–strapped IR, the government has allowed 100 % Foreign Direct Investment (FDI) in most segments of rail infrastructure such as suburban rail, metro rail, station development, locomotive manufacturing, and dedicated passenger and freight lines.

It has already generated interest in the following areas already– High Speed Rail (HSR); Medium Speed HSR and Station Development. In HSR a foreign player is allowed to run a parallel and fully privatized railway company.

In all, the Railway Ministry has notified a list of 17 areas for FDI to increase the flow of cash and technology into the sector. With the opening up of the sector foreign corporations such as Bombardier, GE, Alstom, Siemens, EMD, Mitsubishi, Toshiba and Mitsui are expected to increase their investments and levels of activity. Under the Make in India policy of Prime Minister Narendra Modi, the IR is awaiting an investment of US $ 1,000 billion over the long -term period to be awarded via the Public Private Partnership (PPP) route.

During the speech Prabhu unveiled the thrust areas as the national carrier to become the prime mover of economy again, resource mobilization for higher investments, decongestion of heavy routes and speeding up of trains, passenger amenities and safety. Here are highlights of his speech:

• Passenger fares, which are heavily-subsidized (via revenues from freight), have not been increased.
• The Minister did not announce any new trains in the budget.
• Investment in the railways will increase to Rs. 8.5 lakh crore ($137.32 billion) over the next five years
• The minister said spending will be focused on improving and expanding existing railway lines, many of which are operating at more than full capacity
• Tickets can now be booked 120 days ahead of travel date, instead of 60 days now.
• Wi-Fi to be available at 400 railway stations.
• Surveillance cameras to be introduced in select trains and suburban trains for women safety.
• SMS alert service to be introduced for arrivals and departures.
• Toll free number 182 created for security related complaint-Railway helpline number 138 will become operational 24×7.
• Record investment plan expenditure of a record Rs. 1.1 lakh crore in 2015-16 from an estimated Rs. 61,500 crore in 2014-15.
• Central government to outlay likely at 41 per cent (Rs.45,100 crore) in 2015-16

• Four dedicated freight corridors to be completed this year; 6608 Kms of track to be electrified.

• Wagon-making scheme to be reviewed to make it easier for private investment; Speed on nine corridors to be increased from 110-130 to 160-200 Kms per hour.

• Feasibility report of high speed train between Mumbai and Ahmedabad expected by mid- 2015.

• Regulatory mechanism to be set up for deciding on tariff and disputes: Project worth Rs 2,500 crore using BOT annuity route to be launched.

• Speed of 9 rail corridors to be increased

Also, technology has been the underlying factor in the budget on Thursday.
A much-needed digital facelift is on the anvil to transform Railways into a more modern, secure and consumer-friendly service over the next five years. There would be amongst others an online information on latest berth availability; an integrated mobile application; including a station navigation system; a customer-friendly freight movement initiatives such as introduction of barcoded/RFID (radio frequency identification); tracking of parcels and freight wagons, automated parcel warehouses and a customer relationship management system.

Of the total Rs.8.5 trillion proposed investment plan from 2015-19, Rs.5, 000 crore has been dedicated to IT and research. If the Indian government’s railway budget speech of 2014-15 mentioned the word technology only once, this time around there were no fewer than 14 mentions, with an entire section dedicated to leveraging technology that also spoke of manufacturing Braille-enabled coaches to help the visually-impaired.

To set the tone in technology, the minister took questions on the railways budget on Twitter and Facebook. Prabhu also spoke about talking about SMS alerts, hand-held terminals TTEs to verify passengers and download charts, a move towards paperless work. He also spoke about putting in place an integrated customer portal to serve as a single interface for customers to access different services.

The government spoke about plans to introduce a modern train system called train sets which are similar to bullet trains without an engine to haul them. “We hope that the first set of these trains would be running on our system within the next two years,” said Prabhu in his budget speech. The minister said that the government will continue to pursue other projects like Modi’s pet high-speed rail between Mumbai and Ahmedabad.

Finally, a Budget that does not placate, nor does it play to galleries –a pragmatic one, after years of dithering the Budget, I presume holds the key to revamp this gangling leviathan that can build the momentum for a significantly reformed Railways in the years to come.

And it reminds me of one of my favorite authors — the intrepid American travel writer Paul Theroux writing in his The Great Railway Bazaar, “the trains in any country contain the essential paraphernalia of the culture’’.

(Rajiv Theodore is a journalist based in Delhi. An alumni of St. Stephen’s College, he likes cooking, traveling, and contact sports.)