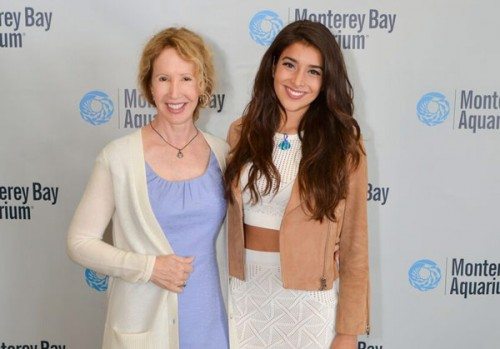 The award was presented in public ceremonies at the aquarium by aquarium Executive Director Julie Packard and by Brandon Birtell with The Paul Walker Foundation, according to a press release.

The award, established in 2014 in collaboration with Walker’s daughter, recognizes individuals who are using their public stature to advance ocean causes and support philanthropic ventures.

Before he began his acting career, Walker was an aspiring marine biologist and he remained a lifelong friend of the ocean – and of the aquarium.

“I can’t begin to express how humbled and honored I am to receive this award from the Walker family,” said Anjali World during the ceremonies. “Paul’s dedication to marine conservation inspired me tremendously. I will forever fight to carry on Paul’s legacy in protecting marine life.”

Anjali Ranadivé, who performs under the stage name Anjali World, grew up in the San Francisco Bay Area and developed an early passion for wildlife – as a middle school volunteer at the aquarium, and with other nonprofits including The Ocean Project. She is the daughter of billionaire entrepreneur Vivek Ranadive.

She began her performing career after earning a marine science degree from UC-Berkeley. At the same time, she founded Jaws & Paws, a marine and wildlife conservation nonprofit that campaigns for protection of sharks, sea turtles, polar bears and tigers. She gives all the proceeds from her music to Jaws & Paws.

At the October 3 celebration, the aquarium also presented its Paul Walker Youth Award to 17-year-old high school student Katie Ridgeway of Monterey, a Teen Conservation Leader and volunteer at the aquarium.

While Paul Walker’s daughter, Meadow Walker, was unable attend, she said in a statement that, “My dad was in awe of the ocean and wanted to see it protected.  It’s exciting to know scholarships and students like Katie will ensure the future of our oceans. It’s an honor to be supporting her and the Monterey Bay Aquarium’s teen program.”

On behalf of The Paul Walker Foundation, Birtell presented a scholarship check to Ridgeway and a contribution to the nonprofit aquarium for its Ocean Education and Leadership Center.

“Ocean conservation plays a central role in Anjali’s life, as it did for Paul Walker,” said Julie Packard. “Like Paul, she is passionate about creating a future with healthy oceans, and inspiring others to do their part. We’re proud to have played a formative part in shaping that passion, and look forward to honoring her for all she’s accomplished.”

“We’re also so proud of what Katie is doing to inspire her peers and our visitors as an ocean conservation leader,” Packard said. “She has such a positive influence on the adult staff, volunteers, and all the aquarium guests with whom she interacts. I can’t wait to see all that the future holds for her.”

“I was fortunate to have visited the Monterey Bay Aquarium with my father on several occasions,” said his daughter, Meadow Walker. “It held a special place in his heart, as it now does in mine. I am proud of him, and this award that honors his commitment to ocean conservation.”

The mission of the nonprofit Monterey Bay Aquarium is to inspire conservation of the oceans.

The arrival of fall, and living a life in gold

Her son diagnosed with a rare neurodegenerative disorder, Sikh American activist battles for his life

Your $40 could get someone’s vision and life back