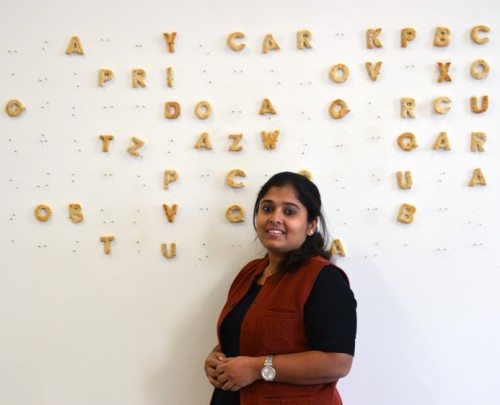 Self-described as a “conceptual artist working with a multidisciplinary approach for socially engaged art and research practices,” Indian artist Shilpa Rangnekar’s work takes observations from everyday life and uses an artistic lens to delve deeper into seemingly innocuous relationships. She is renowned for using food in her art and masterminding expressive, community oriented projects.

A native of Indore, Rangnekar lives and works in Jaipur with her husband, Lochan Upadhyay — who is a sculptor and also does Public art projects. Prior to settling in Jaipur, Rangnekar resided in Baroda, where she attended MS University of Baroda and earned her BFA in painting in 2005. Furthermore, she also received an MVA in painting from Hyderabad Central University in 2008. She is visiting the US for an exhibition of her works.

Excerpts of a phone interview with Rangnekar:

Can you tell me about your current work?

I am doing a residency at the Bemis Center for Contemporary Arts in Omaha. It’s a residency program that invites local and international artists for a three-month period where we get a stipend and studio where we can work with other artists.

This time, we had a theme, the “Future of Food;” we are eight artists who work in the medium. I recently did an installation and a show at one of the local galleries. The residency ends on December 9th.

Tell us about the show Identify it. Share it. Eat it. Live it. exhibited at the Garden of the Zodiac Gallery, in Omaha…

The show actually started on October 29th — that was when it opened. But let me introduce you to my work a little bit so you get an idea about it. I’m more interested in the idea of every day and how one finds the creativity within that area. That’s how food comes into the picture.

This time around, while I’ve been here [in the U.S.], I was working on edible installations. I literally installed them in the gallery and people could come and eat them. That was a completely new idea for people over here.

For the show I actually had three edible installations and they dealt with the idea of sharing a meal. The food incorporated very obvious words that represented the viewers’ emotions and feelings. The idea was that the viewers had to make a choice of what they wanted to eat, but sometimes they could share, whereas sometimes they just consumed it.

Are there recurring themes you try to incorporate into your work?

I’m more interested in the idea of the connection between home and food, and how it gets associated with one’s identity and personality traits.

I also use words in my art so people can actually read their food. The idea is to connect home, food, identity, and emotions, and feelings, so most of the words I used were personality traits and desires.

What is Sandarbh? What sort of work do you coordinate with them?

Since 2010 I’ve also been associated with artists’ initiative called Sandarbh. We’re an India-based organization of Indian and international artists who come and work together in a new context which they otherwise wouldn’t get in a normal studio. We are based in and around a small town called Partapur, which is on the southern side of Rajasthan.

When artists come, they come with a notion of what art is and about, and it’s interesting to see how they negotiate with communities and explore the local resources.

I started in 2010 and now I’m coordinating residencies for them. Right now there’s a residency going on that is a collaboration with the Jaipur Art Summit.

My association with Sandarbh has also helped me in evolving my own art. One of my recent community art project Equilibrium in collaboration with Sandarbh, BLVS and Walpodenakademie and supported by Creative Encounters really helped me explore and understand the possibility of my own art-practice within the context of the community..

Who are some of the artists who have served as an inspiration to you, and who are your favorite contemporary artists?

Right now I am reading a book on Eva Hesse. I like works by several artists like Barbara Kruger, Anish Kapoor, Kate Ericson & Mel Ziegler and more recently I am also intrigued by projects like Conflict Kitchen and  The Dharavi Biennale that perfectly demonstrates the Art of social practice.

Are there notable similarities or differences between the artistic landscape of India and that of the U.S.?

I haven’t yet explored too much of the U.S. since I’ve mainly been in Omaha, but I think in both the U.S. and India younger artists are becoming more privy to newer mediums such as performances, socially engaged art practice, new media, and even food.

I’m also planning on visiting New York and San Francisco, so I think that’s when I’ll see more of the diversity in the art world that the U.S. offers.

Do you believe the Indian government is heavy handed with its censorship policy?

I’ve run into incidents when I was studying at art college, and there have some after, and they have been at regular intervals. Yes, there are occasional issues of censorship being faced by artists, but I think every time there is a censure artists come together and find creative strategies to address them.

Do you believe there is enough of a focus on expanding artistic horizons within the educational systems of India and the U.S. respectively?

In the U.S. my observations on educational programs have only been through the internet and listening experiences of fellow artists.

In India, it’s different. Many institutes have now started introducing a more open approach for students to explore while they are studying. Also, there are many organizations/events coming up like Kochi Muziris Student Biennale and FICA that involves students to get experience and expose to the many aspects of art. So Situation is rapidly changing.

At the same time it is difficult for artists to survive through the government programs that are offered. But there are these private organizations that are coming up, for example, the Indian Foundation for Arts in Bangalore and they are doing an exceptional job of providing resources for artists. They help artists develop their projects and in the future there is the hope that more organizations like that will come up.

But, I’d also like to say that we don’t have many exchange programs between India and America. When I was trying to come here I was trying to figure out a way to get a travel grant but it was very, very difficult. I had to end up financing my own travel. This is pretty shocking because I think when it comes to art, mobility is something that a lot of passionate organizations are working on and it’s something that America and India should work on, too.

What are your plans for the future?

I’m here until January and I’ll be visiting museums and trying to meet new people in San Francisco and New York while figuring out if I’ll have the opportunity to exhibit my work — specifically the edible installations — over there.

My husband is also an artist and he is also associated with Sandarbh. We live in Jaipur and have opened up a new space under the Sandarbh name that will be a shifting studio for us and other artists and host creative events such as art talks, film screenings and performances. It’ll provide an interesting situation for local artists, who will be able to get acquainted from art from outside, as well — we have plans to have artists from Delhi, Bangalore, Bombay, and other places come and show their work there. I’m certainly looking forward to that.

The arrival of fall, and living a life in gold

Her son diagnosed with a rare neurodegenerative disorder, Sikh American activist battles for his life

Your $40 could get someone’s vision and life back