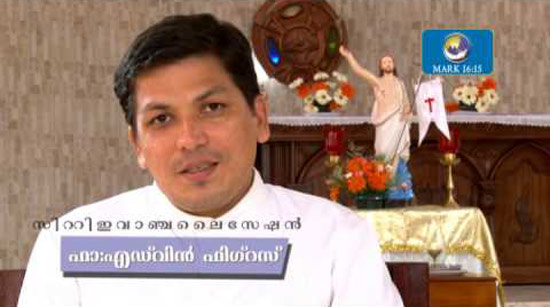 Police have arrested a fugitive Catholic priest for allegedly raping a minor girl, on Tuesday.

Father Edwin Figarez, 41, from Poomangalam, Thrissur district in Kerala, had been absconding for the last six months after the police registered a case against him.

He allegedly raped a 14-year-old Catholic girl for three months in his room near the church from January to March when he was serving at Puthenvelikkara Kurisingal Church.

The shocking incident came to light when school teachers noticed some changes in her behaviour at school. After school officials told her parents about her behavioral changes, and upon them questioning, she revealed that the priest had sexually abused her.

Her parents filed a complaint with the Aluva police immediately. Later medical examinations confirmed that the girl was sexually abused.

On Tuesday, he surrendered at the Vadakkekkara police station in Ernakulam and revealed that he was hiding in Bengaluru for some months.

Earlier, police had arrested two relatives of the priest, Silvesto Figarez and Ben Gari Figarez, for helping him to abscond from the state.

The Kottappuram Diocese, to which the priest belongs, had initially rejected the allegations against him, but, later on, suspended him when the police registered the case and confirmed the crime.

Father Edwin Figarez was famous for his spiritual lectures and music compositions. He has many spiritual music albums to his credit.

The police said that the priest was exploiting the girl’s interest in music.