Over 500 Attend Third Annual Event by SALDEF’s SikhLEAD Interns
Washington, DC, July 6, 2016 – It is among the most heart-warming events hosted by US lawmakers: ‘Langar on the Hill’, sharing and partaking in a community meal in a spirit of equality, harmony and selfless service!
The third edition of the exceedingly popular event led by SALDEF’s SikhLEAD interns drew some dozen powerful lawmakers and a gathering over 500-strong to the historic Kennedy Caucus Room of the Russell Senate Building on a scorching hot day in early July.  SALDEF is the Sikh American Legal Defense and Education Fund which offers a great initiative, the SikhLEAD Internship Program, to inspire and educate the future generation of Sikh American leaders by placing them in internships with congressional offices, federal agencies, think tanks, and other organizations.
This year’s Langar (a free meal for all) was co-sponsored by Senate Democratic Leader Harry Reid and Congressman Mike Honda (Democrat – California) and organized by 16 students comprising the largest SikhLEAD class in SALDEF’s 20-year history.
The most powerful lawmakers in the world waxed eloquent about the achievements and contributions of the Sikh community in America.
“Sikh Americans have made great contributions to this country – from their history of agricultural and business innovations to their outstanding military service”, said Congressman Honda.  “At a time where entire communities are under attack for their faith, these opportunities for dialogue are especially important.  I would like to express my sincere thanks to the Sikh American community, my congressional colleagues and their staffs for sharing this meal together.  I hope we continue to recognize and advocate for Sikh Americans and all our nation’s diverse faith communities.  I promise to continue to do my part as a member of the Congressional American Sikh Caucus”.
It was a very busy day on Capitol Hill – lawmakers were back on Tuesday from the July 4th break, for a short legislative session in an election year, and demanding votes on an issue of paramount importance to many – sensible gun control.  Prior to the break, Democrats had staged a famous sit-in to protest the lack of votes on gun legislation.
Congressman Joe Crowley (Democrat – New York) told the Langar gathering, “During the sit-in on the Floor of the House of Representatives, I made it a point to remind the Speaker (Paul Ryan) of the massacre at Oak Creek in his District, in Wisconsin, where Sikh Americans were targeted by a gun man, just to remind people that this has happened all over the country and to all kinds of people.  That is why we have to bring commonsense gun legislation to the Floor of the House and pass it in the House and Senate and sign it into law.  The Sikh American community is going to be there to help us make that a reality”, he said, to much applause.
Referring to progress made over the last two years, Congressman Crowley pointed out that the Sikh festival of Baisakhi is celebrated at the Pentagon.  He noted “the FBI has now started tracking hate crimes against Sikh Americans.  We had over 100 bipartisan members of Congress call for Sikhs to be able to serve in our US Armed Forces”, he said.
The lawmaker predicted that in the next few months, the International Basketball Federation will rule that Sikhs can play in international tournaments with their turbans.  “I believe we are making progress all over the country and all over the world”, he said.
Congressman Crowley thanked members of “SALDEF for their long-standing hard work here on the Hill”.  Recognizing SikhLEAD intern Prabhjot Singh of Centreville, VA, who is serving in his office this summer, he declared the young leader “is doing an outstanding job”.
Democratic Congresswoman Judy Chu of California, who co-founded the American Sikh Congressional Caucus in 2013, told the Langar gathering, “I wanted to make sure people understood the wonderful tradition of heads covered, shoes off, and sharing a meal”.
Regarding the meal that was served, it comprised of daal (lentils), roti (Indian bread), rice, aloo-gobi (potatoes-cauliflower), yogurt, kheer (rice pudding), and was freshly prepared by Fairfax-based Bombay Café.  Langar is a 500-plus year tradition started by Guru Nanak Dev Ji, the founder and first Guru of Sikhism.  It brings everyone together regardless of race, ethnicity, faith, gender, background or socioeconomic status. 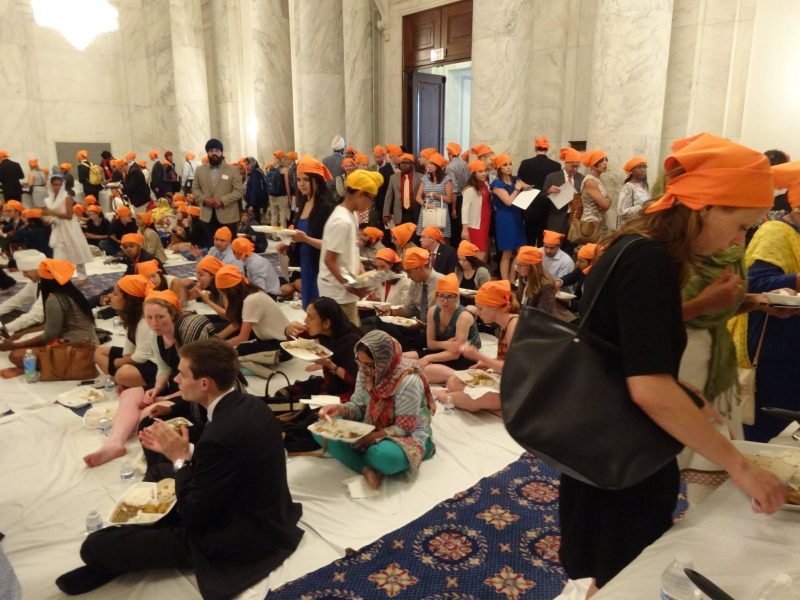