OPINION: The Republican Hindu Coalition’s support for the GOP nominee is ill-informed and dangerous to the community they claim to serve. 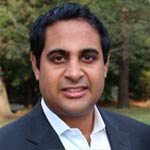 This is the quote I immediately thought of when news about the Republican Hindu Coalition’s event with Donald Trump came to light on Saturday evening. It’s not hyperbole to compare Trump to Nazi Germany – indeed, many non-partisan scholars have already highlighted how his rhetoric compares with white supremacists, Nazis and others.

Those who participated in Saturday’s event simultaneously enabled Trump and his anti-democratic, anti-immigrant, anti-minority rhetoric and tendencies while making the Indian American community look like a bunch of politically uneducated buffoons. It showed a stunning ignorance of Trump’s positions and how they will affect Hindu Americans, Indian Americans and India, for that matter.

And it showed a portion of the community that was so desperate for attention that it was willing to spend several million dollars to hear Trump to say stupid things like, “I’m a big fan of Hindu.” It’s one thing to host a fundraiser for $10,000 and tolerate a local politician who doesn’t know much about our community in order to educate him or her, and quite another to waste millions on a man who can’t name your religion, but more importantly, has committed to policies that will harm your community.

But the Republican Hindu Coalition’s support for Donald Trump is ill-informed and dangerous to the community they claim to serve.

First, a big portion of the evening was tied to the claim that Trump will be better for India. This is false. Trump’s campaign has been built on the promise to reduce free trade. And yet, the US-India relationship has flourished primarily because of free trade. Over the last 20 years, India’s booming ties with the United States in areas like technology, IT, pharmaceuticals and others have been largely because of America’s trade policies.

In addition, the Hindu American community largely consists of professionals – those who are benefiting most from globalization and trade. We can certainly debate whether free trade has benefited Americans or not, but there is no doubt the Indian IT sector would not be a world leader without US investment and business.

So, the idea that someone who is going to restrict free trade with India will be better is simply false.

But the most dangerous, and false corollary judgement made by the Republican Hindu Coalition is the idea that, because Trump is anti-Muslim, he must, therefore, be pro-Hindu. Other faith-based groups in America, including Jewish Americans, Mormon’s and others, have quickly realized that scapegoating one faith can quickly lead to the broader scapegoating and discrimination of other minority faiths – which includes Hindus. Most Hindu Americans realize that as well, which is why 70% of the community is supporting Hillary Clinton for President.

Trump has called for loyalty oaths from Muslim Americans. This can easily be extended to other faiths, including Hindus. Trump has called from a ban on immigration from countries “compromised by terrorists.” Does India, which has been the victim of multiple terrorist attacks, from within, by radical Islamic terrorists, fall into that category? If the ban includes countries with large Muslim population, does that include India, with the second largest Muslim population in the world?

Utah, a state that has not voted Democratic since 1964, is currently a dead heat between Clinton and Trump. Why? Because the state is majority Mormon, a faith that has faced serious religious persecution in the past, and is wary of anyone promising similar action against other faiths. And yet, the Republican Hindu Coalition ignorantly pledges support to Trump even though Hindus make up less than 1.5% of the US population and is disbursed geographically.

Across America, there are many dedicated, intelligent Hindu Americans and Indian Americans educating politicians, raising funds, volunteering on campaigns and raising grassroots awareness about the issues they care about. They are Republicans and Democrats, Libertarians and Greens. All their serious efforts were diminished by the RHC’s event with Donald Trump.

Or perhaps this will be the siren that calls Indian Americans and Hindu Americans to action, to finally fund think tanks, advocacy groups and policy research that truly benefits the community and its causes. I certainly hope it is, so that we can avoid similar spectacles in the future.