Child prodigy Tiara Thankam Abraham, who entered college at the age of 7, has released her first album, a collection of nine world holiday songs in six languages.

Abraham, 10, is the younger sister of Tanishq Abraham, a contestant on the Lifetime reality show Child Genius, who graduated from a Sacramento college last year with three degrees.

Talking to The American Bazaar by phone from her Sacramento home, Abraham said she “wanted to choose uncommon songs, that you wouldn’t hear in a [typical] Christmas album.”

The album is available for digital download on CDBaby.com, Google Play, Amazon and iTunes. The price is $9.99 for the entire album, and $.99 for each individual track.

Abraham, the daughter of Bijou Abraham, a software engineer, and Dr. Taji Abraham, a doctor of veterinary medicine, described the album as a “family project,” which was produced in only three weeks. “I spent about 19 hours in the studio, recording the songs, and spent about five hours during post recording sessions,” she said. 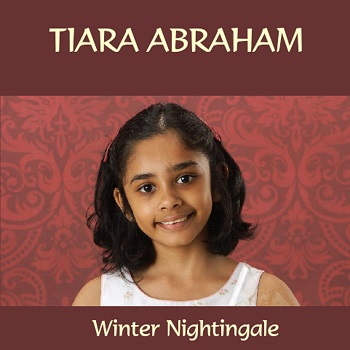 The Abrahams are immigrants from Kerala, India.

Asked how the idea of an album germinated, Tiara said after performing at internationally recognized venues such as Carnegie Hall in New York, “people began to ask me if I had a CD to sell, but I didn’t really have one, which is what inspired me to make one.”

Abraham said her family realized that she has musical talent when she was five, after they heard her sing “Happy birthday” in vibrato style, an extremely unusual feat for someone her age.

The family then hired a private instructor to train in vocals and encouraged her to practice on her own every day. The young Abraham first hit the musical spotlight when she participated and won a vocal competition for the chance to perform at Carnegie Hall. Her second performance at Carnegie was during a summer gala concert.

Abraham told the Bazaar that her family was a “huge help.”

“They would all help me, when they could,” she said. “And my brother was a big help too, as he has a good musical ear, and he can tell the goods and bads of recording.”

Tanishq performed in the San Francisco Boys Choir for about five years.

Tiara is at the moment enrolled at the American River College in Sacramento, California — the same school where her brother graduated from in May 2015. After college, she has big plans. “When I grow up, I want to be a famous soprano classical singer,” she said.

Asked what she does in her free time, Abraham said she plays with her brother.”We play Wii, card games and watch Bollywood shows and movies,” said.

“The last film we watched from Bollywood was Sultan, [a Salman Khan-starrer],” she added.

Both Abraham siblings are members of Mensa, the high-IQ society and both are among the youngest Americans in the group. Tiara, in fact, became a member of the exclusive club at the age of 4.

On the test, Tanishq scored 99.9 percentile and Tiara scored 99.

In an interview with The Bazaar after his graduation last year, Tanishq said he wanted to become a scientist and eventually the President of the United States. Besides Child Genius, he was also featured in the premier episode of the PRODIGIES show, by THNKR.

Tiara said Tanishq is a big influence on her. She said: “He works hard. He is motivated. He motivates me to fulfill my dream.”