Briefing reporters on eve of visit, a Trump administration official said, “We believe a strong India is good for the US” 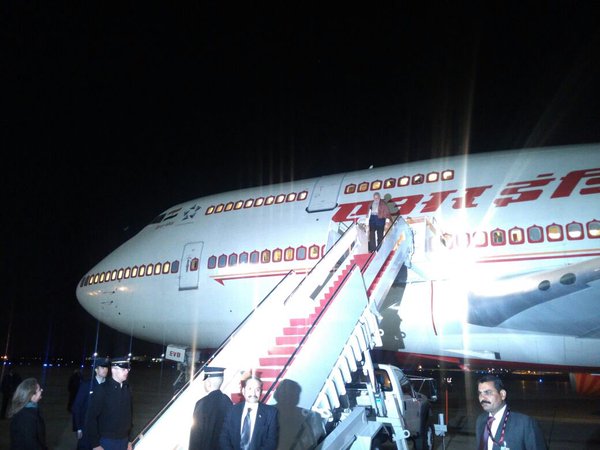 Washington, DC, June 24, 2017 – Briefing journalists on the eve of Prime Minister Narendra Modi’s visit to Washington, a senior White House official revealed preparations have been in full swing to make it memorable.

Prime Minister Modi is arriving Saturday evening for a two-day working visit at the invitation of President Donald Trump.

“This visit is an opportunity to strengthen the US-India strategic partnership which the President very much views as a critical partnership in promoting stability and security in the Asia-Pacific region and globally”, the official said, dispelling doubts about bilateral ties under the new US government.

“The White House is very interested in making this a special visit. We are really seeking to roll out the red carpet”, the Trump administration official involved with the preparations told reporters on Friday.

“The White House has been abuzz, a lot of agencies have been working together”, a lot of preparatory work has been underway “to make it a memorable visit. Both sides recognize the importance of the US-India partnership”.

Following three telephonic conversations between Prime Minister Modi and President Trump, the two leaders will meet for the first time on Monday afternoon. They will begin with a one-on-one interaction, then lead a bilateral meeting for about an hour, after which both leaders will read press statements. The meetings will be followed by a cocktail reception, and then a working dinner which will notably be the first for a foreign leader at the White House under the Trump administration. In all, they will spend about five hours together.

“It’s a long interaction, lots of time for the two leaders to get to know each other, to interact on the critical issues that face our two countries”, the White House official said. “This visit provides an opportunity for relationship building. The two leaders have a lot in common”, she said, pointing out that “they are the world’s two most followed political leaders on social media”. President Trump has about 32.7 million followers on Twitter while some 30.9 million users follow Prime Minister Modi.

“They are both innovators, they are both businessmen, they are committed to bringing greater prosperity to their people and thinking of innovative ways to do that. They are going to find a lot of common ground in their discussions both personally and in terms of the strategic partnership”, the official said.

Regarding the agenda, regional and global issues will be discussed, those that advance common priorities like fighting terrorism, promoting economic growth and prosperity.

On Prime Minister Modi’s wish list are 22 unmanned Guardian drones. The White House official would not confirm the status of the request, saying, “We can’t talk about potential or pending armed sales before they are notified to Congress”. But, she hinted at a favorable outcome, emphasizing that the defense relationship with India “is extremely important” and that “the US is interested in moving forward in providing the high technology it provides to its closest allies and partners. We are looking at a very productive visit”, she said.

The official made it clear: “The US is very much interested in facilitating India’s defense modernization and helping to enhance its role as a leader in the Asia-Pacific. We believe a strong India is good for the US”.

Reportedly, the sale of the drones, a deal estimated to be worth over two billion dollars, has been approved by the State Department, making it a game-changer ahead of Prime Minister Modi’s maiden meeting with President Trump.

The official noted that defense trade with India has supported thousands of American jobs. Since 2008, India has signed over 15 billion dollars in defense contracts with the US.

Regarding the energy partnership, Indian energy companies have signed over 32 billion dollars in long-term contracts for the export of US liquefied natural gas, including from Maryland and Louisiana.

Responding to a question about the H-1B visa program whose biggest recipient is India, the White House official said there are no plans to discuss the visa issue and that the US administration has already signed executive orders relating to work and immigration.

“President Trump’s executive order on H-1B visas directs the Secretary of State, the Attorney General, the Secretary of Labor, and Secretary of Homeland Security to propose potential reform to the H-1B visa program. However, there have been no immediate changes to issuing these visas, no changes that target any specific country or sector”, she said.

The White House is very cognizant of the contributions of the Indian diaspora. Prime Minister Modi’s visit will “emphasize our strong people-to-people ties”, the Trump administration official told reporters. “Today, nearly four million Indian-Americans are in the United States and more than 166,000 Indian students are studying in the US contributing five billion dollars in economic activity and supporting an estimated 64,000 American jobs. Indian-Americans have really embraced innovation, entrepreneurship, founding 15 percent of the start-ups in Silicon Valley”, she noted.

During the visit, a major area of discussion will be counter-terrorism. “The US and India are both committed to combating all forms of terrorism and strengthening their cooperation in areas such as terrorism screening, intelligence and information sharing, terrorist use of the internet, and terrorist designation”, the White House official said.

Responding to a question about Pakistan, the official drew a distinction in the nature of the US relationship: a strategic partnership with India; and cooperation with Pakistan.

“The relationships of the US with India and Pakistan stand on their own merits”, she said. “We don’t see a zero-sum relationship. We are certainly eager to deepen the strategic partnership with India. But, we are also interested in continuing our cooperation with Pakistan”.

Regarding tensions between the two neighbors, the official said, “We would like to see the normalization of relations between the two countries”, but made it clear the US will not intervene in any way. “We very much encourage India and Pakistan to engage in a direct dialogue with each other, a bilateral dialogue aimed at reducing those tensions”, she said.

The White House praised India for its “very positive” role in Afghanistan. India has committed more than three billion dollars in developmental aid to Afghanistan and is actively engaged in promoting democracy in the war torn country.