NATIONAL HARBOR, Maryland – In one of the most enthralling and widely watched contests, an Indian American teen, Karthik Nemmani, 14, of Texas, has been crowned champion of the 2018 Scripps National Spelling Bee. It’s a triumphant moment for the community — for eleven consecutive years, children of Indian origin have won the prestigious competition, a unique sporting event which tests their intellectual prowess, and they have made a clean sweep of awards at this year’s event bagging the top six slots.

The winning word was ‘Koinonia’ (communion with God or fellow Christians) for Karthik, an eighth grader at Scoggins Middle School in McKinney. He received a cash prize of $40,000 with the Bee’s engraved trophy, $2,500 and a complete reference library from Merriam-Webster, among other rewards.

Karthik faced off with Naysa Modi, 12, of Dallas, Texas, in an engrossing finale deftly moderated by Dr. Jacques Bailly, official pronouncer at the Bee for 16 consecutive years and a former champion (1980). Naysa, in seventh grade at Reynolds Middle School, was awarded 30,000 dollars for finishing second after misspelling ‘bewusstseinslage’ (a state of consciousness).

Karthik clinched the championship by correctly spelling ‘haecceitas’, followed by the winning word. He was almost stoic-like in his demeanor on stage. If he was nervous, he didn’t show it. “I had confidence, but I didn’t think it would happen”, he said upon being declared the champion. “I’m really happy”, he added crediting spelling coach Grace Walters with helping him prepare for the Bee. 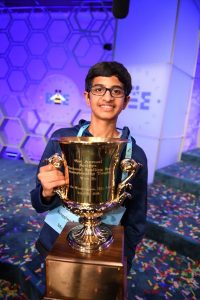 Karthik loves playing individual sports like spelling because he “doesn’t collaborate well”, he admits. Regarding his favorite word, it is ‘kummel’ because of its rather odd pronunciation.

Among the words he spelled correctly in the championship rounds were ‘jaguey’, ‘shamir’, ‘passus’, ‘grognard’, ‘ankyloglossia’, ‘cendre’, and ‘condottiere’.

Interestingly, Karthik did not qualify for the national finals via the traditional route: the regional spelling bee. He is the beneficiary of a new invitational program, RSVBee, which allows more champion spellers to compete at the national level. The record number of spellers this year, at 515, is a result of the program. So, along with the 278 regional bee winners, an additional 238 spellers were selected to compete in the finals — those who aced their school spelling bee or were a former national finalist attending a school which is enrolled in the Bee program. Of these, one boy was unable to attend the event held at the Gaylord National Resort and Convention Center just outside of Washington.

“To welcome more spellers than ever to compete exemplifies the evolution of our program and the vast interest from families across the country”, Paige Kimble, executive director of the Scripps National Spelling Bee said. “With RSVBee, we are leveling the playing field for national finals qualification and providing more opportunities for students to experience all the thrills, friendships and memories that come from the event”. She added, “Bee Week is a special experience that challenges the mind and warms the heart”.

Naysa made her fourth appearance at the spelling bee via the traditional route. On stage, she aced words like ‘telyn’, ‘lophophytosis’, ‘videlicet’, ‘ochronosis’, ‘succiniferous’, ‘lochetic’, ‘pareidolia’ and ‘forcat’ which would boggle the minds of multitudes.

Of the 41 finalists who were competing in the National Spelling Bee on Thursday morning, 22 or over 50 percent were of Indian descent.  By afternoon, that number had dwindled to 16 spellers who were participating in the national championship, of which 11 (nearly 70 percent) were Indian American kids.

Also Read: More than half the Spelling Bee finalists are Indian Americans

At a press conference Wednesday, we queried Kimble about the continued dominance of Indian American kids in the competition. “What we know about winning the Scripps National Spelling Bee is that the championship trophy will go to a speller who is dedicated”, someone who has been studying for several hours daily over 2-3 years, she replied. “So, winning the title is all about hard work. So, no matter where you come from, if you are standing on the stage tomorrow it is because you worked very hard”.

Kimble emphasized, “One of the things that we are so proud of and excited about is that so many Indian American children love the program, their families love it and support it. We would not be who we are without this. We are very grateful for them”, she said.