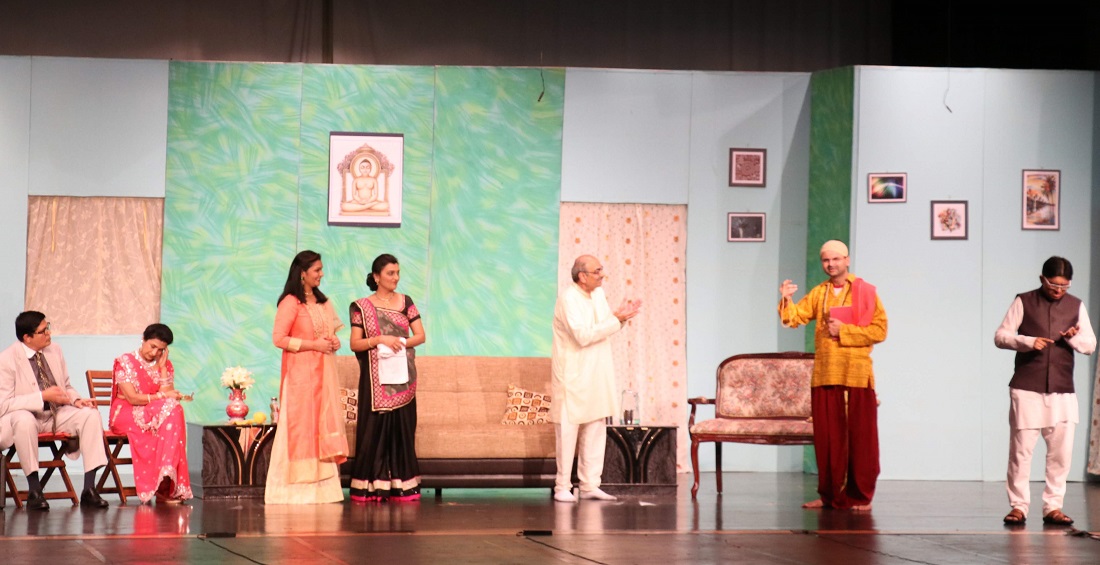 The play was staged as part of fundraising for Shree Nrushinhpura Digambar Jain Samaj.

One of the objectives of the SNDJ is to bring awareness, exposure and respect of Jain principles ahimsa (non-violence), anekaantvaad (multiplicity of views) and vegetarianism by organizing spiritual, cultural, academic and charitable programs.  The Natya Gurjari is a Potomac, Maryland, based non-profit organization founded with explicit objective of sustaining and enhancing rich cultural heritage in performing arts and literature via theater.

The audience showered praises on top notch acting of the cast and outstanding quality of overall production.  Many members of the audience gushed, “throughout this hugely entertaining play, we automatically assumed that this group is a highly-talented travelling professional troupe from India, but are pleasantly surprised to know that our members of Gujarati diaspora in the United States spawned this excellent and thoroughly professional level theater-group, which is a matter of great joy and pride for us!” Some also expressed the opinion that this play is at par with successful and top-quality plays that are performed by visiting groups from India.  One unanimous expression from the audience was that our own talented artists from the Gujarati community in USA must be encouraged and that Natya Gurjari must be supported and encouraged to continue staging such high-quality plays.

Devang Vakharia, the President of SNDJ who was instrumental in organizing the play, along with his committee members and trustees, lauded the “exemplary cooperation and support of all involved” with the program. Ashesh Shah of Natya Gurjari gave vote of thanks to local organizers and deeply appreciated their hosting of the play and vowed to bring more such plays in future to entertain the highly knowledgeable audience.