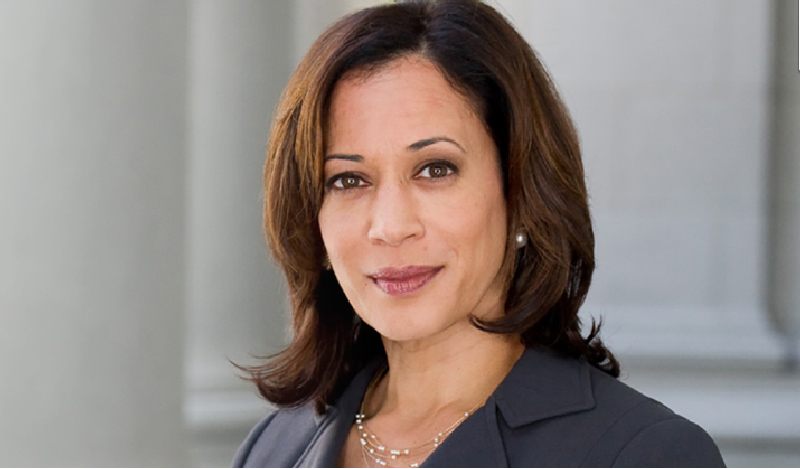 Harris credits her Indian mother and grandmother for political ascent.

WASHINGTON, DC, January 21, 2019 – Kamala Devi Harris, the first Indian American to serve in the US Senate, announced Monday that she is running for the White House in 2020, intent on challenging President Trump.

The influential junior senator from California, a member of the Democratic Party, made the much-anticipated announcement on Martin Luther King, Jr. Day which honors the legacy of the 1960s slain civil rights leader. She revealed her candidacy for president both in a teaser video on her social media accounts and in an interview on ABC’s “Good Morning America.”

According to the video, she will formally launch her campaign at a rally in Oakland, her birthplace, next Sunday. In it, she affirms, “the time is now for us all to defend the American values of equality, decency, justice and democracy” and vows her candidacy will be animated by her life’s work of fighting “For The People,” her campaign logo.

“I love my country. This is a moment in time that I feel a sense of responsibility to stand up and fight for the best of who we are,” she said in the interview on ABC, taking a swipe at the Trump presidency.

The 54-year-old lawmaker who sits on the powerful Senate Judiciary Committee is a trail-blazing beauty with brains. If elected, she will become the first female and first Indian-American president of the United States.

It must be mentioned that both the Indian and African-American communities claim Harris as their own. The daughter of immigrants, her mother, the late Dr. Shyamala Gopalan, hailed from India while her father, Donald Harris, is from Jamaica. Her parents split when she was a kid and both she and her younger sister, Maya Harris, were raised by her Tamilian mother.

“It was really my mother who took charge of our upbringing. She was the one most responsible for shaping us into the women we would become. And she was extraordinary,” Harris writes in her memoir, The Truths We Hold: An American Journey, one of two books released earlier this month.

In her second work, Superheroes Are Everywhere, she writes, “My mom was a superhero because she made me feel special. She believed in me and that helped me believe I could do anything.”

Delivering the keynote address at the 2017 Madeleine K. Albright Luncheon hosted by the National Democratic Institute (NDI), Harris credited her Indian grandmother, Rajam Gopalan, and mother for being her role models.

“I come from a long line of tough, trail-blazing, phenomenal women,” she told the NDI audience. “My grandmother would go into villages in India with a bullhorn, telling poor women how to access birth control. My mother came to the US at the age of nineteen to study endocrinology at the University of California, Berkeley, and eventually became a leading breast cancer researcher. There’s no way I could have begun my political journey without strong role models like them to inspire me.”

As things stand, Harris is joining an already crowded Democratic field that includes three women presidential hopefuls: Rep. Tulsi Gabbard of Hawaii, the first ever Hindu lawmaker elected to Congress; and senators Elizabeth Warren of Massachusetts and Kirsten Gillibrand of New York. Gabbard is an American Samoan who adopted Hinduism at an early age. Like Harris, members of the Indian-American community consider her as their own. It would be interesting to see how the presidential race plays out.

A crowded field notwithstanding, all the Democratic candidates – both in the race and potential – are qualified to serve as president of the United States. The challenge is running against Trump in a contest that would more than likely be contentious, to say the least.

Addressing a standing room only “Women Who Impact” event hosted by the Indian American Impact Project, last October, Harris spoke of an “inflection moment” in America, of a “time that is challenging us to be the best of who we are.”

“Right now, there are a lot of people who are feeling very distrustful of their government,” she said. “This is not a time to be popular. This is a time to be leaders and that means speaking the truth no matter how uncomfortable those truths may make other people feel.”

Without naming President Donald Trump and the Republicans in Congress, Harris told the audience, “In the face of those powerful voices that are attempting to sow hate and division among us, let’s speak the truth. The vast majority of us have so much more in common than what separates us.”

Among the truths, the senator noted that crimes against South Asian Americans have increased by 45 percent since November 2016 (when Trump was elected president). She pointed out that racism, sexism, antisemitism, anti-Muslim sentiments are all on the rise.

“Sexual harassment in the workplace is real; sexual assault of women and girls, boys and men, is real,” Harris decried. “People are touting that the economy is doing well, but not for the majority of people. Wages have remained stagnant while the cost of gas, housing, tuition keep going up.”

While Obama has not endorsed any of the Democratic candidates on the 2020 presidential ticket so far, he has in the past described Harris as a “trailblazer” and “fearless fighter.”

Harris is certainly no novice at breaking through glass ceilings. She became the first female and first woman of color to be elected District Attorney of San Francisco when she pulled together a coalition of people winning the 2003 election and defeating two-term, seemingly entrenched, incumbent Terence Hallinan.

Harris served two terms (2004-2011) before deciding to run for Attorney General of California. She became the first female and first woman of color to be elected top cop of the biggest state in the country – and re-elected to the position.

In 2016, she became the first Indian-American elected to the Senate. “From this platform – and every step along the way – I have tried to live another lesson my mother taught me: ‘You may be the first, but make sure you aren’t the last,’” she told the NDI audience.