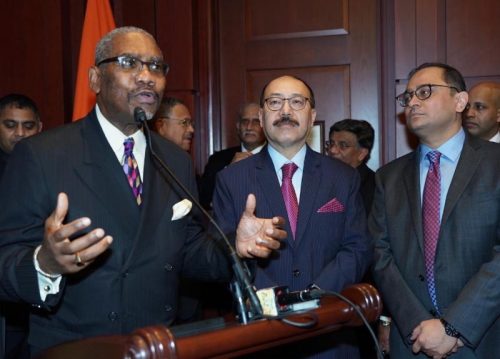 WASHINGTON, DC – In an unprecedented turnout, 67 members of the US Congress accorded a resounding welcome to Indian Ambassador Harsh Vardhan Shringla, who arrived in the capital city merely a month ago and has hit the ground running ever since.

Clearly elated by the response at the Capitol Hill reception, Thursday evening, the envoy said it reflected “the strong bipartisan support for India” in the US Congress and among the American people. “You need only look around this room to see the enthusiasm of your constituents who have flown in from all parts of the United States to be with us here today,” he told members of the Senate India Caucus, co-chaired by Mark Warner (Democrat-Virginia) and John Cornyn (Republican-Texas), and its counterpart on the Hill, the House India Caucus, headed by George Holding (Republican-North Carolina) and Brad Sherman (Democrat-California). The event was co-hosted by both the India caucuses, a great goodwill gesture befitting New Delhi’s top diplomat in Washington.

Shringla revealed that in meetings with the senior leadership in Congress since he arrived here, lawmakers “recalled fondly that they were champions of the India-US relationship long before it became fashionable.” The Congressional Caucus on India and Indian Americans, popularly known as the House India Caucus, was founded 25 years ago, in 1993, by Frank Pallone, Jr. (Democrat-New Jersey) and co-chaired by Bill McCollum (Republican-Florida), and over a decade later, in 2004, the Senate India Caucus was formed with Cornyn and Hillary Clinton (Democrat-New York) at the helm.

“Since then, at every step of the way, we have counted on your understanding and support as we continue to steer our countries ever closer,” Shringla told India caucus members mentioning the “unstinting support” and “sterling role” they played in the successful completion of the civil nuclear accord and the designation of India as a Major Defense Partner of the United States. A good part of the envoy’s remarks were devoted to the growing economic and diplomatic ties between the two nations.

At one point, he quoted Indian Prime Minister Narendra Modi who, in his 2016 address to a joint session of Congress, stated, “Our relationship has overcome the hesitations of history. Comfort, candor and convergence define our conversations”.

At the Capitol Hill reception, Shringla said, “I will look to the same comfort, candor and convergence as we work closely with members of Congress, particularly the India Caucus, to build upon the tremendous progress already made. Our synergies and similarities are immense, our values and love of freedom identical. The spirit of entrepreneurship, innovation and high regard to family and community defines the best of both of our peoples”.

A seasoned, skilled and affable diplomat, he described the people-to-people ties between India and the US as “one of natural affinity and mutual attraction. Almost every American I have met has told me how he loves Indian food and almost every Indian you meet would tell you how they love Netflix, shopping on Amazon, and posting updates on Facebook,” he said.

Noting the progress in bilateral ties, including increases in trade and defense spending, senator Warner asserted, “A lot of that strength comes from the Indian American diaspora,” 3.5 million strong, of which 130,000 members reside in Virginia.

Senator Cornyn pointed out that Indian Americans in Texas are “the best educated, the most successful, and contribute the most of any group” he knows in the state, a fact that drew loud applause from the audience.

Noting that “the world has not become a safer place, but a more challenging and dangerous place,” Cornyn said he looked forward to working with the Indian leadership on matters of mutual defense, to fight against the threat of terrorism, and to make sure that people of both India and the US enjoy the blessings of prosperity, opportunity and freedom.

Referring to a hate-motivated crime at the Swaminarayan Temple in Louisville just over a week ago which has sent shock waves through the Indian American community, Congressman Yarmuth told the gathering, “A very disturbed young man vandalized the Hindu temple in my community. The bad news was that it happened. The good news was that there was such an incredible outpouring of support from the local community,” he said noting that people of the Jewish, Christian, Islamic and other faiths bandied together during the clean-up efforts. “Everyone came out to show their solidarity with the Hindu community because that’s the kind of community we are,” he added.

The lawmaker affirmed he salutes the Indian envoy and the diaspora. “The Indian American community is such an important part of the fabric of America,” he said.

Congresswoman Maloney announced she has “a special present for the ambassador” and revealed she is introducing a bill, co-sponsored by many members of the House India Caucus, that will create a Congressional Gold Medal in honor of the 150th birth anniversary of Mahatma Gandhi — a tribute to the apostle of peace and non-violence for his many gifts and leadership to the world.

Congressman Pallone noted with pride that the House India Caucus he founded over two decades ago “is going strong.” The lawmaker recalled it was formed “because we wanted to bring India and the US closer together” and recognize the Indian American community which “has contributed so much. I always say I have more Indian Americans in my district than any other congressman,” he told guests at the reception.

Geeta Goindi, a journalist based in the Washington, DC, is a Contributing Editor. She has been covering the Indian American community for more than a decade. Follow her on twitter @geetgoindi