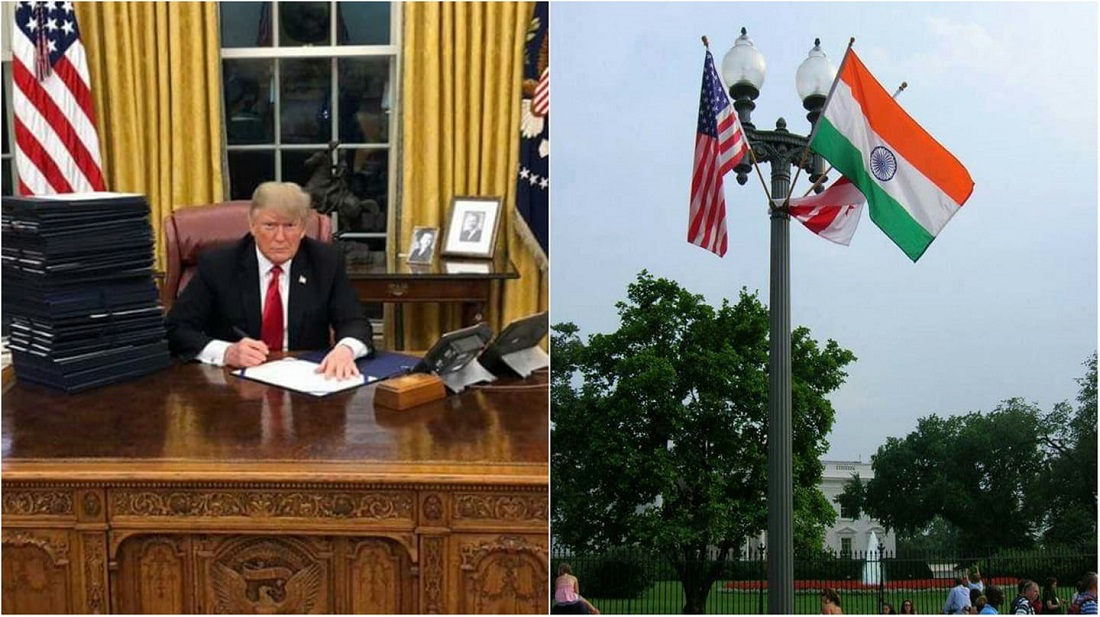 Empathizing with India, the US president anticipates a “strong” response to Pulwama terror attack.

WASHINGTON, DC – President Donald Trump has described the current standoff between India and Pakistan as a very bad and dangerous situation in wake of the terror attack on an Indian paramilitary force in the Pulwama district of Jammu and Kashmir.

“It’s a terrible thing going on right now between Pakistan and India,” he told reporters in the Oval Office, Friday. “It’s a very, very bad situation, and it’s a very dangerous situation between the two countries. And we would like to see it stop. A lot of people were just killed and we want to see it stopped. We’re very much involved in that,” he said.

In what is being called the worst terror attack in the state since the start of the century, 40 Central Reserve Police Force (CRPF) personnel were killed February 14 when a 19-year-old suicide bomber rammed a vehicle filled with explosives into a large Indian security convoy. The Pakistan-based terrorist group Jaish-e-Mohammed claimed responsibility for the attack.

Empathizing with India and understanding it’s right to self-defense, Trump believed, “India is looking at something very strong,” noting it “just lost almost 50 people and – with an attack. So I can understand that also,” he said prior to a meeting with Chinese Vice Premier Liu He at the White House.

Not one to mince any words, he underscored that the US has taken a tougher line on Pakistan by slashing the military and economic aid provided by his predecessors. “Pakistan was taking very strong advantage of the United States under other presidents and we were paying Pakistan $1.3 billion a year. I ended that payment to Pakistan because they weren’t helping us in a way that they should have,” he said. “A lot of people don’t know that, but I ended it nine months ago,” he added emphasizing his punitive action.

Trump indicated that the US “may set up some meetings with Pakistan” to defuse tensions with India. “We’ve developed a much better relationship with Pakistan over the last short period of time than we had,” he told reporters.

“We’re talking and a lot of people are talking, but it is a very, very delicate balance going on right now,” he said. “There’s a lot of problems between India and Pakistan because of what just happened in Kashmir.”

The White House was quick to condemn the terrorist attack in India on the day it happened.

A statement released February 14 read, “The United States condemns in the strongest terms the heinous terrorist attack by a Pakistan-based terrorist group that killed over 40 Indian paramilitary forces and wounded at least 44 others. We express our deep condolences to the victims’ families, the Indian government, and the Indian people for the loss of life in this brutal attack.”

The Trump White House called “on Pakistan to end immediately the support and safe haven provided to all terrorist groups operating on its soil, whose only goal is to sow chaos, violence, and terror in the region.”

Standing shoulder-to-shoulder with ally India, it stated, “This attack only strengthens our resolve to bolster counterterrorism cooperation and coordination between the United States and India.”

US National Security Advisor John Bolton followed up with a telephone call to his Indian counterpart Ajit Doval in which he made it abundantly clear that America supports India’s right to self-defense against cross-border terrorism.

“The two NSAs vowed to work together to ensure that Pakistan cease to be a safe haven for JeM and terrorist groups that target India, the US and others in the region,” the Indian Foreign Ministry said in a statement.

“They resolved to hold Pakistan to account for its obligations under UN resolutions.”

On Thursday, members of the UN Security Council (UNSC), comprising 15 permanent and non-permanent members including China, strongly condemned the heinous suicide bombing in Jammu and Kashmir and expressed condolences to families of the martyrs.

A press statement issued by the UNSC named Pakistan-based terror outfit Jaish-e-Mohammed which claimed responsibility for the attack.

The resolution, adopted unanimously, “underlined the need to hold perpetrators, organizers, financiers and sponsors of these reprehensible acts of terrorism accountable and bring them to justice.”

It reads, “all states must, in accordance with their obligations under international law and relevant Security Council resolutions, cooperate actively with the Government of India and all other relevant authorities in this regard.”

It categorically states, “Any acts of terrorism are criminal and unjustifiable, regardless of their motivation, wherever, whenever and by whomsoever committed.”