How incorporating humor in daily life can make on happier and less self-absorbed. 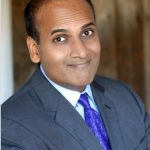 A couple of years back, one of my American friends asked me why a lot of Indian people at his office were so serious and appeared to be gloomy. I said they must be worried about their 401K and retirement plans. He said, “But our company has a great retirement plan.” I said, “Yes, they must be worried that those plans only last for this life time. Is there a provision for a rollover for the next life?”

While this conversation provided me with great material for my stand up routine, I think there is some truth to it too. A lot of Indian people, especially new arrivals from India don’t smile and appear to be serious. I used to be like that also. While walking, driving, sitting in a restaurant or buying groceries, I would be self-absorbed in my thoughts; thinking about work and figuring out ways to expand my business.

When I shared with my business colleagues that I was doing stand-up comedy, they were so surprised. Every one of them said, “Oh, wow. I thought you were so serious.” I would reply, “Yes, I was a closet-comedian. It took me five years to come out of the closet.”

As a kid in India, I used to be very funny. I used to try out new ways to make people laugh. I would summarize the hackneyed plots from Hindi movies for my family. They would find it amusing that even a 6-year old could predict that the rich father of the heroine would create hurdles for her poor lover. I would imitate the stern monologue of the girl’s father forcing her to go out with her “chosen” fiancé from a rich respectable family. Eventually, after the hero helped the girl’s father with a major problem and won his approval, the wedding party would dance with joy. I would dance along with them as if I were on TV too.

Over time, as I got involved in the business world, I became more serious and lost touch with my carefree self. Now I try to add levity to everyday situations as appropriate. When I return my rental car at Dulles airport, I often tell the employee, “Hey, if you find any gold bricks in the trunk that I may have left behind, please let me know.” They always laugh. One older African-American employee found the line so hilarious and gave out a hearty laugh. He said, “I have been so busy and tired. This is the only laugh I had all day.”

Sometimes when an immigrant driver in the rental car shuttle smiles and offers to help me with my bags, I say, “Why couldn’t you be like those indifferent drivers from New York? Now I have to tip you!” If the drivers are helpful, I tip them but the added touch of humor brings a smile to their face.

Several years back, my wife slipped on the kitchen floor of our house in Fairfax, Virginia, and bruised her face badly. She had to get some stitches. The nurses at the emergency room were looking at me suspiciously because falling is a pretty lame excuse. They asked her privately if she were sure it was an accident and whether she felt safe going home. She said yes. After they were ready to discharge her, in front of the nurses, I said to my wife, “Honey, this is the last time we are talking about your mother. Okay?” They looked at me suspiciously again and seeing the smile on my wife’s face, burst out laughing.

Even my kids have picked up this habit and have started incorporating humor in their daily routines. Sometimes the humor gets dark. Once on a vacation in Florida, my son, Vicktor, asked me, “Hey, dad, did you bury the body? What about the arm sticking out of the trunk?” The other people in the elevator gave us a strange apprehensive look. Eventually we all had a good laugh. Now whenever we are on vacation, our elevator joke has become our family tradition.

My son, Neil, imitates my wife at the dining table by saying, “Oh, my Gods! or when anyone sneezes, “Gods bless you!” Even in serious situations, he is able to get away with it. Once my wife was calling India and instead of dialing the international prefix, “011,” she dialed, India’s country code, “91” and followed by the city code that started with a “1.” Eventually two cops showed up at our house and when I greeted them with a surprised look, they insisted on seeing my wife to ensure that she was not a victim of domestic violence. Once we cleared the misunderstanding, they went to their car on our driveway to write the report. After I gave a nod to Neil, 13, at that time, he went to their car and said, “Officers, actually I had called 911 because my mom was torturing me. She was forcing me to eat Indian food. This thing called Aloo-Gobhi, which is mushy cauliflower.” Even the cops burst out laughing.

Mahatma Gandhi once said, “If it were not for humor, I would have committed suicide long back.” I find that incorporating humor in my daily life has made me happier and less self-absorbed. When I travel on business or go out with my family, rather than viewing a rental car employee, a restaurant server or a passenger in the elevator, as just people inconsequential and insignificant to me, I now think even more selfishly. I try to view them as potential guinea pigs that could benefit from having an extra smile through my humor. It also helps me view them as fellow human beings. Humor has also allowed me to get in touch with my crazy inner child and has helped me forget some painful memories from the past. When my wife and I recall the nurse’s reaction in Virginia, we both forget the pain from the bruises and the slow healing of the stitches. And yes, just be to clear one last time. It really was an accident!

Where is the pain?