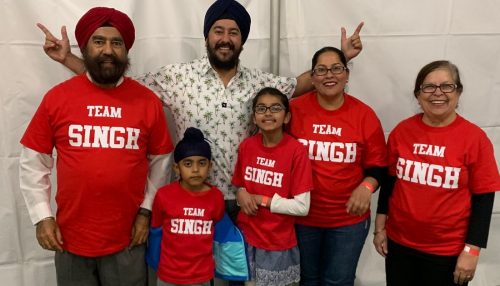 “I am in the whole episode representing Sikhs” on “Holey Moley” Amandeep Singh tells The American Bazaar.

Holey Moley, a summer game show that premiered on ABC this Monday, got rave reviews for its unique format of showcasing self-proclaimed mini golf lovers from across the country. The participants compete through an epic obstacle golf course, making the series both entertaining and full of adrenaline.

If you haven’t still watched what is being touted to be the number one summer show of the season, then you must make time for it this week, as there is another unique representation that would be seen on the show. California-based actor and model Amandeep Singh will be seen on the hour-long series that airs this Thursday on ABC.

Visibly excited about the show, Singh sees it as a mark of representation. “It is an amazing exposure for Sikhs throughout America and the world,” he told the American Bazaar. “I want all Sikh Americans and others in the US to watch this Thursday’s episode. It is an hour-long episode, and I am in the whole episode representing Sikhs.”

In the just premiered series, NBA superstar Stephen Curry serves as an executive producer and resident golf pro. Twelve contestants put their miniature golf and physical skills to the test and face off challenges on a supersized miniature golf course. Rob Riggle and Joe Tessitore serve as on-camera commentators, while Jeannie Mai reports from the sideline.

Singh sees the chance to represent his community in a show that features one of America’s favorite past times as a great equalizer. As for a long time, the general perception about South Asians in America has been that they are mostly interested in cricket, a sport that has slim following in the United States. By being out there, as an Indian American and as a Sikh, Singh believes it may change the perception and can further highlight how similar we may be to any American.

Singh, who is popularly known as “That Hollywood Sikh” on social media, wants to make a mark as the first turbaned Sikh actor in Hollywood. “The show is averaging 10 million viewers, so I would say it is huge to be seen there,” he said.

Singh has been part of many television series and also modeled last winter along with his dad Pritam Singh for Dollar Shave commercial. His dad was seen on the billboards in Times Square in New York City. Singh has also appeared in Grey’s Anatomy in the past.