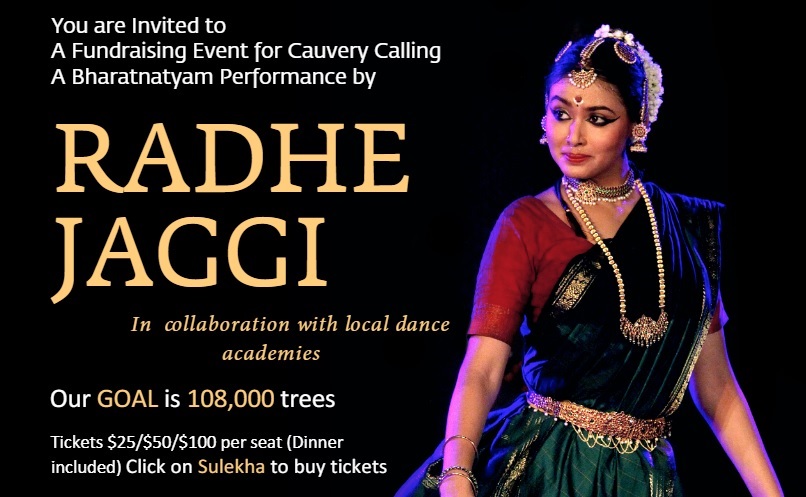 Radhe Jaggi, daughter of Sadhguru Jaggi Vasudev, to perform bharatanatyam at the event.

“Cauvery Calling,” an environmental initiative by the Isha Foundation to rejuvenate the Cauvery river, will host a bharatanatyam event in Rockville, MD, just outside Washington, DC, on October 14, to raise money for planting trees in the river basin in southern India.

Bharatnatyam will be performed by Radhe Jaggi, in collaboration with local dance academies.

Radhe Jaggi is the daughter of Sadhguru Jaggi Vasudev, founder of the Isha Foundation.

The Cauvery Calling campaign, launched by the foundation, helps farmers to revitalize the Cauvery river by planting trees. It aims to plant 2,420,000,000 trees in all.

According to the Foundation, the Cauvery basin in Karnataka and Tamil Nadu has depleted over 40 percent in the last 70 years. At least 87 percent of the basin’s original tree cover has been lost, resulting in drought for 15 of the last 18 years in Karnataka. In Tamil Nadu, 17 districts were declared drought-hit this year, says the Foundation.

Cauvery Calling is a first of its kind campaign to reverse the trend and revitalize the river – the lifeline of the people in the region. The initiative seeks to transform the lives of 84 million people by saving Cauvery.

Isha Foundation hopes the initiative will improve soil health by replenishing organic content in the soil; revive the river and groundwater levels by increasing water retention in Cauvery basin by an estimated 40 percent; and augment farmer income through agro-forestry, which increases farmers’ incomes by 300 to 800 percent in 5 to 7 years.