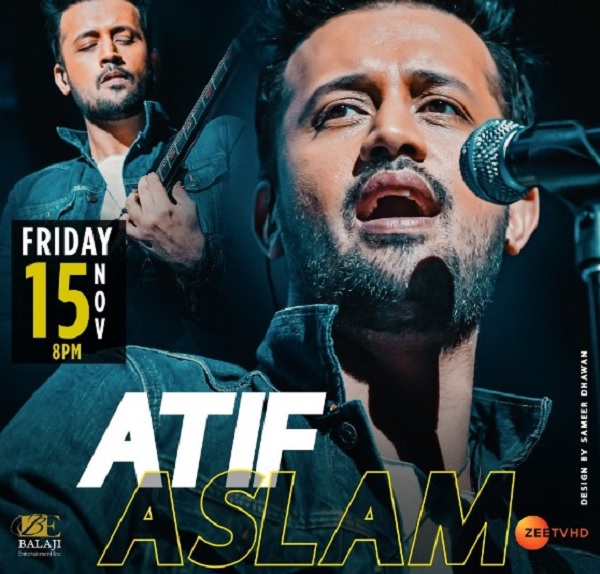 The Atif Aslam Live” concert is being promoted by Intense Entertainment.

Pakistani singer Atif Aslam, one of the most talented South Asian singers of his generation, will perform in the Washington, DC, area on November 15.

The “Atif Aslam Live” concert, promoted by the Northern Virginia-based Intense Entertainment, will be held at the MGM National Harbor, in Oxon Hill, MD, 10 miles to the south of the nation’s capital.

Manish Sood, founder of Intense, told The American Bazaar that it is the only Atif concert on the East Coast as part of the singer’s current tour and he expects a sold-out crowd.

This is the fifth Atif Aslam concert hosted by Intense and 61st overall promoted by the company, Sood said. It will be the first time the Wazirabad, Pakistan,-born singer performing at the Theater at MGM National Harbor, which has hosted a number of celebrated singers since it opened doors in 2016. Singers who performed at the venue include Cher, Britney Spears, Christina Aguilera, Mariah Carey, Shreya Goshal and Rahat Fateh Ali Khan.

Aslam is an enormously popular singer with a worldwide following, especially in Pakistan and India and among the South Asian diaspora. He has sung for a number of memorable songs for both Pakistani and Bollywood films.

His song Dil Diyan Gallan from the Hindi film Tiger Zinda Tha has been viewed more than 578 million times on YouTube.

Another song, Tajdar-e-Haram, is one of the most viewed Coke Studio songs, having registered more than a quarter billion views on YouTube.

Sood, who launched the Intense banner with an Atif Aslam and Sunidhi Chauhan concert in July 2011, said the singer is a favorite of his for a personal reason. “This Atif Aslam concert is very close to my heart because of my wife Deepa,” he said. “When her father was very sick and was in ICU , both Deepa and her dad used to listen to Dil Diyaan Gala every single day. After dad’s death, Deepa feels that this song connects her to his soul. So I wanted her to relive her memories with her dad with Atif performing live. I think the reason this show is sold out is because of dad’s blessing from above.”

The promoter said his wife was able to cope up with her sorrow because of Dil Diyan Gallan and now the song has become a part of her everyday life. “So sometimes music is not just something to hear but it could be beyond that,” he said. “It can change your life, your perception and can save you from depression and much more. That’s why we say music has no language, religion or boundaries.”

Aslam performed in Abu Dhabi on November 14, on the opening night of a T10 cricket tournament. The singer is scheduled to perform in Toronto on Saturday, November 16.