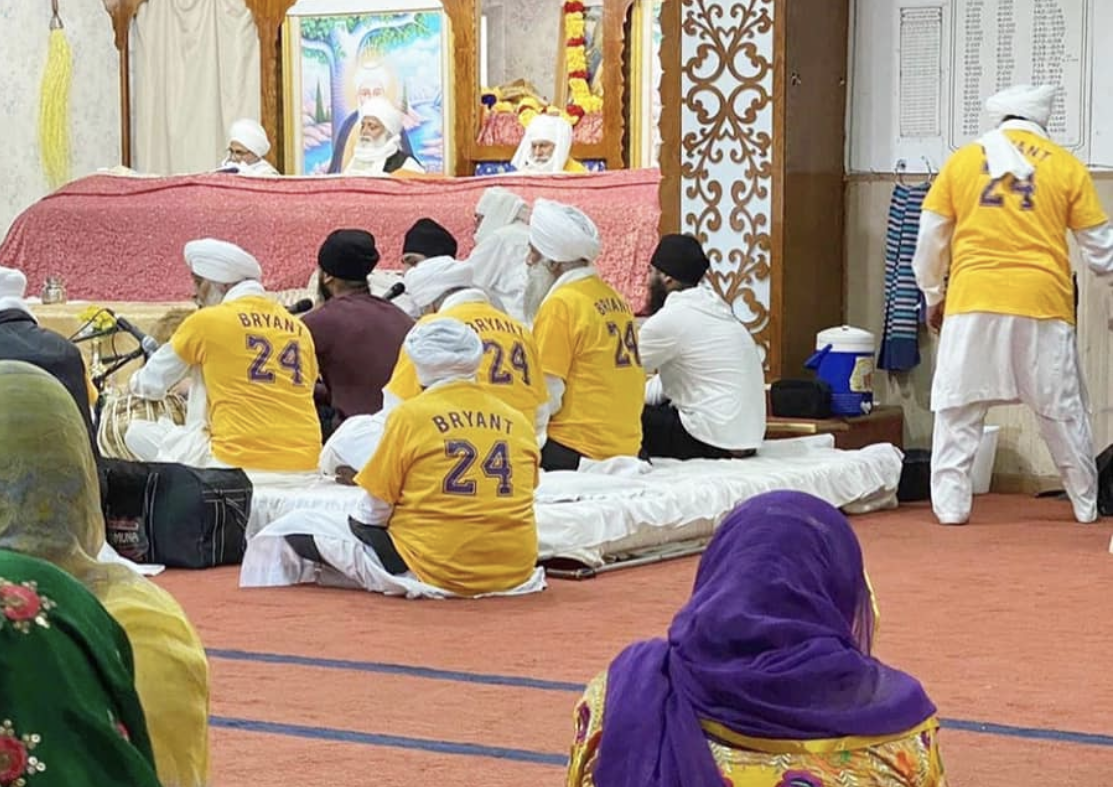 At Gurdwara Nanaksar Sikh temple in Fresno, California, a prayer meeting over the weekend left both the worshipers and onlookers mesmerized with a unique tribute to basketball legend Kobe Bryant.

Hundreds of Sikh men, women and children turned up wearing Lakers colors at the temple for a special prayer meeting for remembering Los Angeles Lakers star Bryant, his daughter Gianna and seven others who lost their lives in a helicopter crash last month.

While men and children wore Lakers jerseys, many women showed up in purple and yellow salwar kameez – a traditional wear for Sikh women.

Kobe Bryant, the American basketball legend touched and inspired many lives during his lifetime. The devastating news of his tragic death has left many across the globe grieving.

The organizers at the Gurdwara Nanaksar in Cherry Avenue in Fresno saw that many Sikh men and children were affected by the untimely death of their idol, who was a reason they began playing basketball.

In fact after they learnt of the tragedy some young men from the community showed up at the gurdwara crying.

Amitoj Singh, a student at Terronez Middle School in Fresno, who attended the prayer meeting said, “The gurdwara authorities thought of organizing a path (prayer) for Kobe and others when they saw a young child crying in the gurdwara. While Kobe was hugely popular across the globe, the Sikh Americans keenly followed him.”

The sangat (association) invited everyone to join for a two hour Sukhmani Sahib Path, a prayer of peace in the Sikh faith. Angad Sandhu another attendee of the prayer meeting and a Lakers fan told the American Bazaar, “I started playing basketball because of Kobe and his game and conduct really inspired me.”

On why Kobe remained such a popular figure particularly among the Sikh American community, Amandeep Singh, actor and model says, “Kobe in the Sikh community was a brave leader. He led without fear, he conquered his missions with unbelievable determination, passion and commitment.

“He was a hero to the Sikh community, especially to children. He inspired many Sikhs to play basketball and chase their dreams. He inspired us in every way. He was a role model to many.

“In his second chapter of life after basketball, he was an amazing business man, Oscar and Emmy winning producer, author and philanthropist.”

“Young Sikh boys looked up to him and how he gave back to other NBA players and mentored them,” Singh said. “He started the Mamba basketball academy and was a girls’ basketball activist and he wanted to create a pathway for girls to achieve their dreams in sports.”

“Another very big reason the Sikh community loved and revered him was because Kobe gave back to the community,” Singh said. “He was doing seva (service), a very important concept of giving back in the Sikh religion and that is why we all loved him too much.”