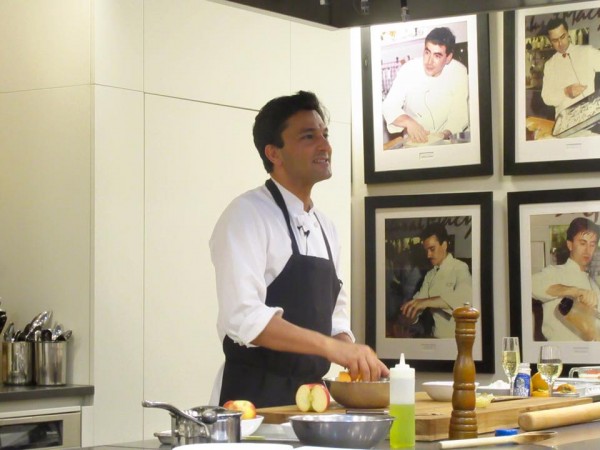 From delivering personal protective equipment to raising money, celebrities have sprung into action worldwide. Even among these many acts of kindness, the efforts of Indian American Michelin-star chef, author, restaurateur, cookbook writer and filmmaker Vikas Khanna in feeding the hungry in India stand out.

One of the judges of Star Plus series MasterChef India, Khanna is based in New York City, but he has distributed over seven million meals in 79 cities across India.

In a tweet on May 25, the chef dedicated his seventh million meal to his “Hero/Mentor/Friend/Inspiration,” Chef Jose Andres, a Spanish-American chef and founder of World Central Kitchen (WCK), “who singled handedly fed the World.”

By today noon, we will reach a milestone of 7 Million Meals (cooked and dry rations combined)
This 7th Million Meal today is dedicated to my Hero/Mentor/Friend/Inspiration @chefjoseandres @WCKitchen
A chef who singled handedly fed the World. #ChefsForWorld pic.twitter.com/rFNsMXgBKh

That day he arranged deliveries to old-age homes, orphanages, leprosy centers and fuel stations in Uttar Pradesh, Maharashtra and the National Capital Region (NCR) around Delhi.

“Challenges and darkness can be won only by unity and light,” Khanna tweeted keeping up his efforts during the month of Ramadan in a show of solidarity.

In a spirit of togetherness and gratitude, he celebrated the Muslim Eid festival by distributing special dry rations, utensils, and of course “seviyan,” the traditional Eid dessert made with vermicelli.

Born in Amritsar, Punjab, to Davinder and Bindu Khanna, Vikas had misaligned feet and could not run until he was 13. Inspired by his mentor Sagar Rajani, who loved cooking, Khanna’s kitchen soon became part of his foundational training.

His journey toward becoming a world-renowned humanitarian made him launch the “South Asian Kid’s Infinite Vision” (SAKIV) to focus on global issues demanding action, such as tsunami and hurricane relief.

“Cooking for Life” was founded by him in 2001 in New York, along with other international chefs supporting many social causes.

His award-winning workshop, “Vision of Palate,” was developed to educate those who had visual disabilities with reference to their sense of taste, flavor and aromas.

He is also the goodwill ambassador for Smile Foundation and tries to work towards eliminating malnutrition in India, pledging to raise a million dollars for it.

Khanna, who has collected and distributed a mind-boggling number of meals, said what got the current drive started was actually simple his worry about his mother, who lives alone in Amritsar, Punjab.

“Maine toh sirf mummy ke liye kiya (I did it only for my mom),” he told the Hindustan Times. “I was feeling helpless since mom is alone in Amritsar. This was killing me.”

It was actually a photograph in a spam mail of a group of elderly people lying on the floor that started his drive. To him, it was a cry of hunger from people like them who had not eaten for many days.

It had a “donate” button that Khanna pressed immediately to transfer funds to the old and infirm. Though he realized later that it was an old, doctored photograph, it did motivate him to reflect and donate to old-age homes and leprosy centers.

“Imagine, ration toh nahi hoga inke paas (they would not have ration with them), because they are based on daily donations,” he told the paper. “And they can’t go out.”

A tweet about wanting to distribute funds actually set twitter afire, said Khanna. Without going out of their homes, could people put him in touch with caretakers, he asked.

Initially, he tried to bear all the costs of distribution in many states, but later many others joined him.

However, the drive has hit its fair share of roadblocks as well. The problem of scammers, and those who are not deserving of the aid taking it away from those who truly need it, has arisen.

One such incident was when a scammer blocked him on WhatsApp after taking donations, Khanna told the Hindustan Times. When he expressed dismay, his mother consoled him asking, “If you don’t burn your hand, how will you learn how to cook?”

In the process, Khanna has also learned how to handle hate, which he said he has received daily. His response is whimsical: “But jab achcha hota hai, main SRK ka gaana laga ke dance kar leta hoon… (But when something good happens, I dance to a song of SRK)”

During an experiment in the NCR, he wondered who would deliver rations. Someone suggested the National Disaster Response Force (NDRF), a specialized Indian agency constituted for such situations.

That answer changed his life forever, says Khanna. He is now determined more than ever to continue his work as long as he has the energy, without losing hope or the drive to improve.

Among the thousands of people who applauded Khanna’s work was Chef Andres himself, who tweeted last week, “Amazing job Vikas for taking the lead on feeding so many…..you have the @WCKitchen  spirit!!”

On Thursday, Khanna, got the ultimate recognition for a New Yorker when the New York Times, the city’s and the nation’s paper of record, highlighted his mission.

“I feel like the past 30 years of my training and my 20-hour workdays have prepared me for this moment,” he told the paper. “This has been the most gratifying two months in my culinary career.”