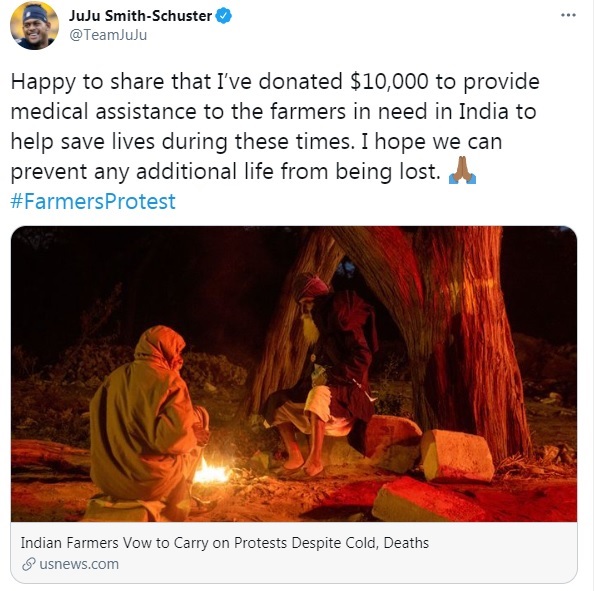 It wouldn’t be an exaggeration to say that India’s farmers protesting against three recently enacted laws have managed to get support from unlikely quarters. After pop queen Rihanna snow-balled the movement with a tweet on February 2, the latest celebrities to show solidarity with the protesters are American sport stars.

On Wednesday, Pittsburg Steelers wide receiver Juju Smith Shuster announced that he has donated $10,000 to aid in medical assistance for the protesting farmers. Los Angeles Lakers forward Kyle Kuzma also tweeted in support of the protest.

Progressive activists in the West, who have been voicing support for the farmers since they began their protests against three agricultural laws enacted by the Indian parliament last year, say the global attention the movement is getting is helping them.

Asked why the farmer’s protest has managed to resonate internationally, even with celebrities who may not have a clear connection with India and its agrarian culture, Jyotsna Kapur, who is associated with International Solidarity for Academic Freedom in India (InSAF) India, said, “the farmers protests have so far appeared to be a genuine ‘cry for help’ to the government of India from the farmer community.”

Kapur, a professor of cinema and media studies at Southern Illinois University, Carbondale, added, “It is rooted in decades of increasing agrarian distress. The farmers recognize the need for agricultural reform, but their previous experience recognizes that the proposed laws are not the reform they need. Is important for the government to practice democratic means and engage in participative democracy. That said, the Indian government must also show its solidarity with the farmers in India, repeal the farmers laws and work with opposing voices to reformulate such laws as noted above.”

Not to forget the movement got an added thrust when Rihanna mentioned it. Kapur adds, “After recent tweets by American celebrities and international figures such as Greta Thunberg, the farmer’s movement has gained more traction in the international sphere. People are anguished and distressed on the government’s lack of consensus building, blocking of the internet, ignoring the calls of their own farmers. The farmer movement should be proud of the support they are able to generate and their firm engagement in peaceful protests deserves plenty of credit.”

Following the ruckus created by celebrity tweets, Indian authorities’ reactions also came under the scanner. New Jersey based Manish Madan, an associate professor of criminal justice at Stockton University, who is also a member of Global Indian Progressive Alliance (GIPA) — a grassroots organization that aims to bring together people of Indian origin to contribute to progressive causes — says, “MEA’s (Indian Ministry of External Affairs) reaction to Rihanna’s tweet in support of farmers in India, shows their utter desperation in controlling a losing narrative that the new farmers laws serve the interest of the farmers. After months of standoff between the civil society, farmers in India and the government, the government has failed to recognize that human rights are universal rights and transcend national boundaries. Painting a genuine movement in a negative spotlight does not help their cause and will only reinforce the dictatorial and totalitarian style of governance that we have witnessed in India under the hyper-nationalism far right-wing government.

Farmers’ supporters criticize the tactic of the government and its backers of labeling protestors as anti-nationals and separatists. Lotika Singha, Honorary Research Fellow at Faculty of Business, Arts and Social Sciences at University of Wolverhampton in Wolverhampton, UK, and a member of InSAF, said, “The constitution of India gives its citizens fundamental right to peacefully protest, and the world’s largest democracy must support constitutional rights instead of delegitimizing them by engaging in standard operating procedure of labeling any dissent as anti-nationals and other unflattering labels.”

On how and if the Indian diaspora can help the movement in any way, Madan says, “The diaspora feels strongly about the current declining socio-political stability in India. There is a long tradition of diasporic involvement in struggles at home, even prior to independence. It is therefore deeply upsetting and frankly, a hypocritic stance where on one hand, PM Modi has repeatedly asked the diaspora for support for several of his campaigns — for instance, the Howdy Modi event in Texas essentially campaigning for Trump’s re-election bid and at another instance, his government attempts to dismiss the international reaction as “internal matter.”

Lotika Sinha adds, “Many diaspora groups across the world have organized international meets, conferences, and marches to show solidarity. Besides, the online discussion series (by Global Indian Diaspora) has helped raise awareness on the topic and express support and solidarity to the farmers.