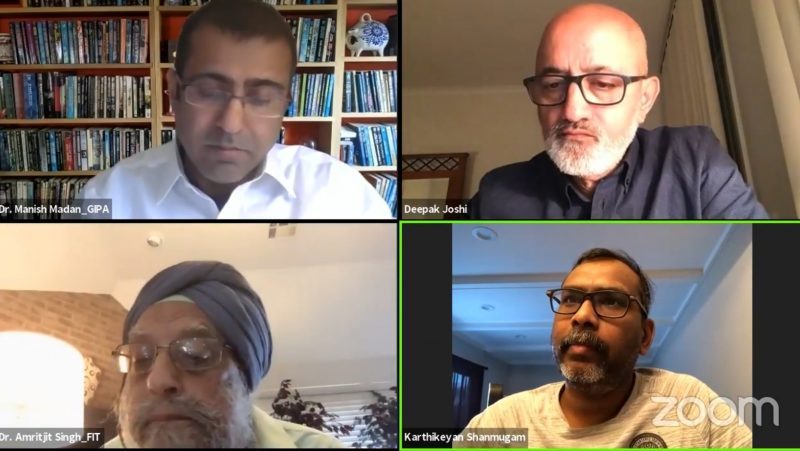 As Indian farmers continue to their agitation against three farming legislation enacted by the country’s parliament last year, more than a dozen Indian American groups have come together to extend their solidarity with the protesters.

At a virtual press conference held on Sunday, the groups asked the Indian government to repeal the laws and draft fresh legislation in consultation with farmers’ leadership.

The law in question are the Farmers’ Produce Trade and Commerce (Promotion and Facilitation) Act, the Farmers (Empowerment and Protection) Agreement of Price Assureance and Farm Services Act and the Essential Commodities (Amendment) Act.

The Indian government says the farm laws are intended to increase farmer’s incomes and expand agricultural market. However, the protesting farmers say the laws were passed without following the due parliamentary process and they pose existential threat to the farming community.

The Global Indian Progressive Alliance, a New Jersey-based grassroots organization that was part of Sunday’s event, said it was “disturbed to see the ramming through of laws without any consensus building” and the “government has repeatedly ignored the calls by farmers for greater support.”

The keynote speaker at the event was Dr. Amritjit Singh, Professor Emeritus of English and African American Studies at Ohio University.

Each group issued separate statements at the press conference.

“We condemn the Indian state’s actions to discredit the farmers’ protest movement as being misinformed and misled towards other vested political agendas, ranging from Maoism to Khalistan, in particular on the occasion of India’s Republic Day when the farmers took out a peaceful tractor parade with due police permission,” InSAF said in a statement. “The farmers have rejected any links to the group that reached the Red Fort and planted a religious flag there even as police in the vicinity were seen to be quietly watching.”

Hindus for Human Rights said, “The farmers have been protesting peacefully for more than two months now, following the principles of ahimsa (non-violence). We pay our respects to the souls of our farmers who have been martyred in the protests. More than 150 farmers have died so far. They shall not be forgotten, and their sacrifice inspires us to stand even stronger in the fight against injustice. Right to protest is a fundamental right and our farmers in India have set an example that will inspire generations to come.”

Young India said in its statement: “This legislative action coupled with the government’s reaction to the concerns raised by the farmers is reminiscent of colonial times. The violence that has been unleashed by goons of the BJP with full support of the various police agencies, as captured by many journalists on video, shows the nefarious anti-farmer stance of the government. The constant effort of the government to turn a farmers’ issue into a Sikh v/s Hindu issue, or a national security issue with the Khalistan angle is deeply condemnable.”