A unique collaboration of musicians, social entrepreneurs and innovators on April 2 to put the spotlight on an issue that needs to be understood by society.

Music can soothe.  Music can transform.  It can bind communities across the world together. These driving principles, as well as the passion to raise awareness around the issue of autism, have brought together some exceptional talent around the world.

The concert will feature some amazing young virtuoso singers and instrumentalists, winners of multiple international competitions from 8 countries: the United States, India, Australia, Ukraine, Israel, Russia, Georgia and Armenia. The concert will also include four autistic Indian artists, to promote inclusivity and the equality of opportunity.  A world-renown singer, composer and public figure Varijashree Venugopal will take part in the concert as a special guest star.

READ: With a child suffering from autism, it’s a fight not worth losing (March 4, 2014)

Masha Brodskaya, Founder and Director at GCI Planet, said: “Our mission is to bring live music and positive motivation to people worldwide. To engage the healing power of music, solidarity and unity, while raising awareness and educating people about Autism”.

Brodskaya is the visionary behind the non-profit organization GCI Planet (Global Creative Initiative Planet), an innovative New York-based Virtual Interactive Concert & Smart Education Platform. She is a Grammy-recognized artist/composer/producer, educator, as well as a VR and neuroscience pioneer. She founded GCI Planet at the beginning of the Covid pandemic in April 2020, alongside GCI’s Technical Director and Grammy-winning producer/sound-engineer Brian Forbes, and Artistic Director Vita Kogan, an internationally awarded educator and composer. Recently world-renowned American economist and philanthropist Nouriel Roubini joined the GCI board of directors.

“Autistic folks are not broken people waiting to be fixed and made a whole. Change the environment. Watch them flourish,” said Dr. Merry Barua, a pioneer in the field and Founder and Director at Action For Autism India. Dr. Nidhi Singhal, a senior member of the organization, who leads the research and training activities highlighted how accepting differences is key, adding “Our philosophy is: Different and proud of it.”

As part of its holistic approach to the issue and supporting the community, AFA offers the Ananda, the assisted living program for people with autism.

The program also features Venugopal, a well-known singer, composer. “The best music comes from a place of selflessness and purity. Autistic folks have the most uninhibited form of expression that translates into anything that they do, especially their music and art. Their unique gift helps us connect with each other on a human level with the help of the most powerful universal language, that is music,” said Venugopal on the occasion.

GCI Planet creates Live Virtual Concerts and Interactive smart education experiences using music as therapy and positive motivation to help children and youth in need, isolation and with disabilities around the world, to promote the equality of opportunity, as well as to raise awareness of the international society to genocide and human trafficking.

GCI Planet is currently representing 37 countries, and includes almost all leading musical institutions in the United States and in the world.  While trying to accomplish the goal of helping and supporting those who are in need, GCI Planet uses cultural diplomacy to unite people of different countries, cultures and religions. 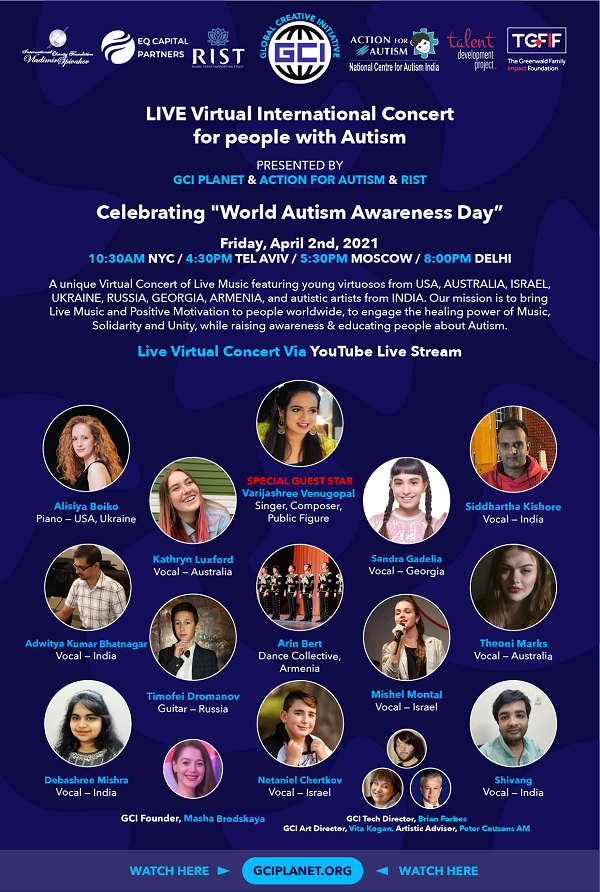