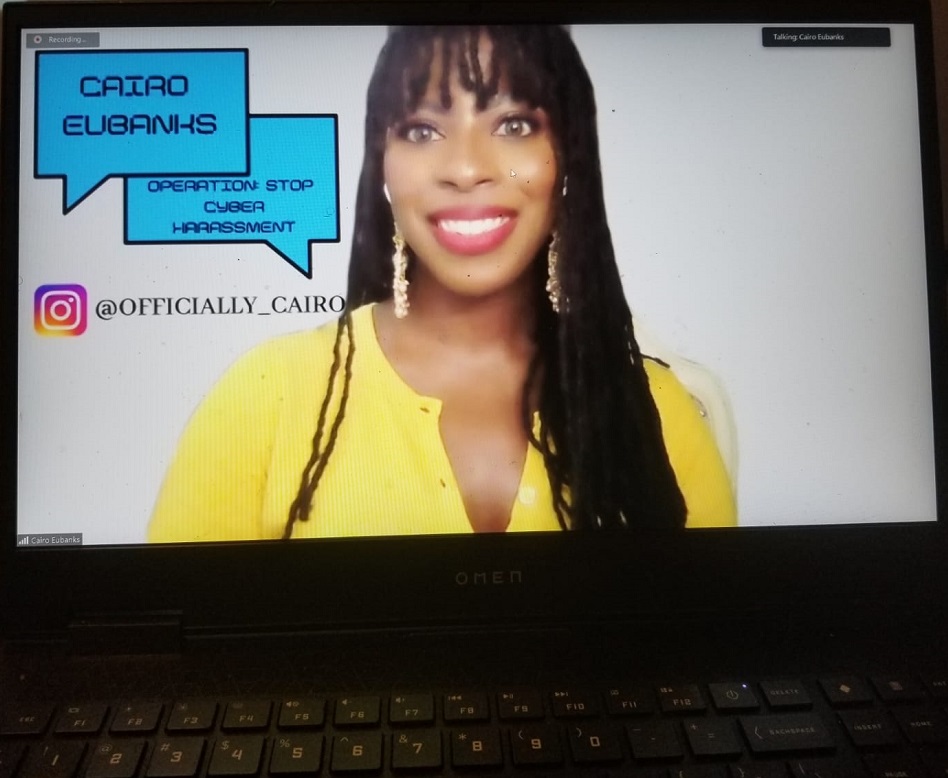 Operation: STOP Cyber Harassment was borne of the reigning Miss Broward County’s sense of duty to act in service of self and others.

She explained that a man from her alma mater, Cornell College, was taking pictures from her social media accounts and distributing them with inappropriate, “dirty” comments.

“Even though I was not concerned about my safety,” wrote Eubanks, “I blocked his many attempts to get in touch, and reported it to my school and to the police.”

She received 155 comments of support, with 30 individuals revealing they had the same experience, from the same harasser.

Many were unaware that beyond filing a local police report, more could be done.

They had told themselves “just move on,” that it was “not a big deal.”

Cyberbullying was easy to dismiss. Hurt, harm and humiliation through the barrier of a screen seemed like a less serious offense without an immediate physical threat.

However, online predators could often be more consistently in touch and say crueler things than with traditional in-person bullying.

During the pandemic, with people particularly dependent on a digital world, Eubanks recognized the need to empower students and parents with the necessary tools to stop cyber bullying and harassment.

Her sense of duty to act in service of self and others led to Operation: STOP Cyber Harassment, a collaborative effort between the Junior Ambassador Program of Global Oved Dei Seminary and University (GODSU) and several strategic community partners, such as the Anti-Defamation League, Broward County Sheriff’s Office, Teen Alliance Project, Thoze People Productions, Connections for Business, and CairoSpeaks/CairoWrites.

The free community event, which took place on April 14, 2021, had over 240 registrants and, thanks in large part to the World Press Agency, the workshop garnered local, national and global buzz.

The message was clear: it is important to validate survivors’ stories and equip them with the resources required to feel protected in a digital age.

With all forms of assault apparently connected to manipulative behavioral patterns, prioritizing the end of cyberbullying sets a clear boundary.

Rather than submit to the idea that words on a screen are not as problematic as violent physical attacks, the event enforced a standard that harassment of any kind is unacceptable.

During the event, high school students, college students, and parents were placed into breakout rooms with IT and mental health experts.

At the end of each session, participants were given a multi-page document with links to more information about useful language, existing apps, and Florida statutes.

The goal was to help students learn how to de-escalate a situation and know that as with questions of what a survivor was wearing or drinking in the wake of an assault, nothing about their online words and images should ever result in unwanted comments.

As Dr. Matthew Fogg of the Federal Cyber Protection Unit said, people were often weary to disclose because of the stigma against “snitching.” In actuality, reporting was self-advocacy.

It was also a defense of others, as Eubanks’s mother, Dr. Diane Moore-Eubanks, Chancellor of Global Oved Dei Seminary and University, said during the event: “You are never too young or too small to make a difference…

“It is important that parents make themselves accessible so children can feel comfortable disclosing. Stand up for kids so they don’t have to report solo.”

The direct result of Eubanks’s account, as supported by her family, was revealed at the end of the seminar. Greg Ehrie, a former FBI agent and current Vice President of Law Enforcement at the Anti-Defamation League, shared that the rapidly accelerating predator would be forced to change his actions.

It was a win for the Miss Florida hopeful, and for all who were then encouraged to be just a little braver.

At the end of the event, students were asked to provide feedback. With over 130 responses, many asked when the next event would be and if they could have similar programming at their schools.

Eubanks is presently working on Bringing the World to Florida, a holistic advocacy leadership course and workshop program set to launch in June 2021.

This international virtual student exchange program will be open to students age 13-17 years old who reside in Florida and around the world. For more information, please complete this interest form, or get in contact at info@cairospeaks.com

Operation: STOP Cyber Harassment was borne of the reigning Miss Broward County’s sense of duty to act in service of self and others. Cairo Eubanks has been actively involved in her community, sitting on boards for New Leaders Council Broward; Broward County’s Social Justice Task Force; and Mayor Messam’s Public Safety Council. She is a Board Advisor and Paralegal for Global Oved Dei Seminary and University and is the Youth Representative to New Future Foundation for the United Nations, serving on the United Nations Department of Global Communications Youth Steering Committee. You can follow her on @Officially_Cairo.

Leandra Ali Dolsingh is a narrative nonfiction writer currently working remotely and traveling throughout the United States. She analyzes where the predominant culture and its many subcultures intersect, merging research and storytelling to view societal issues through her unique lens. Leandra spent her formative years in Ireland, attended high school in the U.S., and university in Canada, graduating with Honours while earning a double major in English and political science. Throughout her childhood, she also made annual visits to her family’s country of origin, Trinidad and Tobago. Through her writing and graphic design, Leandra seeks to explore the many nuances of race in the U.S. and other parts of the world. She is deeply interested in writing about mental health issues, including anxiety and depression. She believes singular stories can be revolutionary in tackling large problems from actionable points, which have the power to affect real change. Leandra is passionate about working to strengthen and support citizens to become more inclusive; she believes empathy is her greatest asset, as strengthened by various cultures from the places she’s visited worldwide. Her training as a 2020 New Leaders Council – Broward County fellow and her work on the board of Broward Young Democrats has presented opportunities to connect with other people who can help her further explore these issues as a writer and an activist. She can be found on https://www.linkedin.com/in/leandraalid/ or oversharing on Instagram @leandraalid.