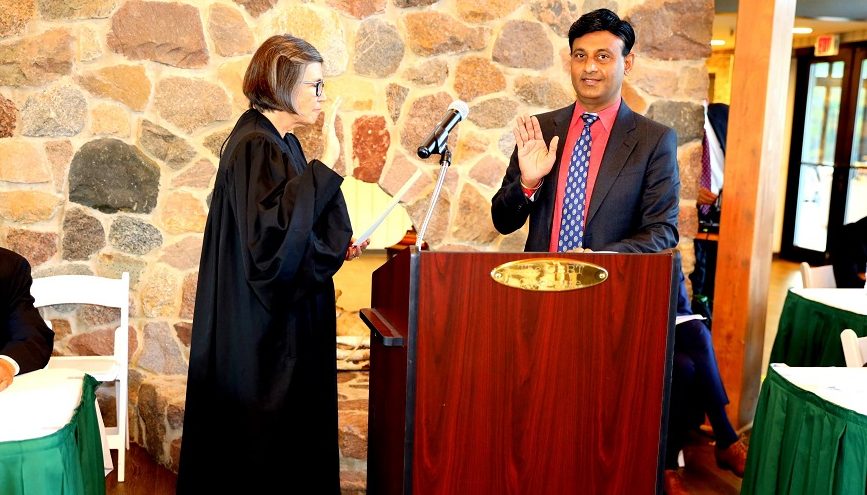 Reddy, immediate past president of American Association of Physicians of Indian Origin (AAPI) was sworn in by Justice Ann Jorgensen, presiding judge of the Appellate Court Second District in Illinois in a solemn ceremony on May 11.

Attended by family and friends of Reddy, the swearing In ceremony live streamed on the Oak Brook TV YouTube Channel. began with invocation led by Reverend Dr. Daniel Meyer.

Besides Reddy, Larry Herman and Jim Nagle were also sworn in as trustees of the affluent village with a population of 10,000 people. Three retiring trustees, John Baar, Phil Cuevas and Moin Saiyed were given official farewell.

In his acceptance speech, Dr. Reddy said, “As a practicing physician, I will use my training and experience to ensure that appropriate and effective health policies are approved by the board and implemented by our village staff.”

“There are many expert doctors and medical professionals in our community,” he said. “I will find ways to engage them through informal work groups or more formal committees if needed to ensure the safety of our residents.”

“I am grateful to the citizens of my hometown Oak Brook and to the key leaders of Oak Brook, including the sitting mayor and members of the governing body of Oak Brook for endorsing and supporting my candidacy to be a trustee of Oak Brook,” Reddy said.

Committing himself to ensure and work tirelessly to keep Oak Brook a strong village, living up to its name as a model village. Reddy said, “I would like to continue and strengthen many programs and services the city offers to all sections of the people.”

“More than ever, fiscal conservatism and wise spending, has become the most important attribute for a financially secure future,” he said.

Endorsed by Lalmalani and Saiyed, Reddy won the April 6 election with Herman and Nagle to “address the most critical issues impacting the village better than anyone else, each with their own unique skills.”

A financial conservator, Dr. Reddy, who grew up in the suburbs of Hyderabad, India, says he always had a passion for “uniting and bringing people together.”

“It all started during my childhood with bringing neighborhood kids together to play ‘gully cricket’ and also bringing people together in college to organize events, demonstrations, and educational tours.”

“Bringing opposing parties to the table for resolving issues has always been my strong strength since my schooling days.”

Not satisfied with his achievements as a physician and leader of the Diaspora Physicians group, Dr. Reddy says, “I always had a strong passion for bringing a positive outlook and giving back to the community.”

Dr. Reddy completed his advanced medical training at Beth Israel Deaconess Medical Center/Harvard Medical School and has stayed on Harvard faculty for more than a decade where he had also served as Chief of Interventional Neuroradiology.

Subsequently, Dr. Reddy and family moved to Chicago which has now become his home.

His wife Leela, who was born and raised in Greenville, South Carolina has a Master’s Degree in Health Management and Policy.

Previously, she was a Director of Network Health Boston, a HMO Health Plan in Boston prior to moving to Chicago. Their son, Rohun is currently doing his JD/MBA at Kellogg School of Management /Pritzker School of Law at Northwestern University.