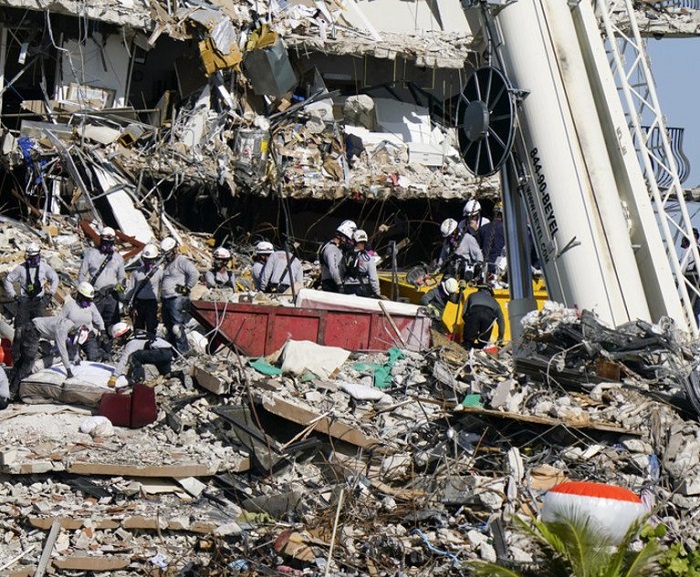 Vishal Patel, 42, his wife Bhavna, 38, a dual British and US citizen who was just over four months pregnant, were identified by Miami-Dade officials on July 9, the Miami Herald reported.

Police said Tuesday they had identified the remains of their 1-year-old daughter, Aishani Gia Patel.

So far 97 bodies and no other survivors have been extricated from the ruins of the building. Authorities say eight people remain unaccounted for and are feared dead in the rubble.

The Sunday before Champlain Towers collapsed Vishal Patel’s niece Sarina Patel called to wish him a happy Father’s Day and to deliver some good news.

She had just booked a ticket to Miami to see the couple and Aishani, whom she had never met. Four days later the condo collapsed killing all three.

“Though our baby girl was not with us long she had an impact on each of our hearts that will last a lifetime,” Sarina told the Herald.

Vishal and Bhavna began their relationship thousands of miles and an ocean apart, Sarina Patel said. Vishal lived in California, while Bhavna resided in the UK.

“Bhavna had the sweetest soul and was the most down-to-earth person. She had a smile that could light up a room. Anything that brought you joy truly brought her joy, too,” she was quoted as saying.

Vishal, too, she said, was a deeply genuine, kind person who never took himself too seriously. “He always knew how to liven up a party with his goofy faces and fun personality.”

Together, they were the perfect match, she said, balancing each other out and always bringing out the best in one another. They were in a long-distance relationship for almost 10 years before they were married in New Jersey, where Vishal was raised.

“They had begun the life they had always dreamed of and were ecstatic to be expanding,” Sarina Patel said. The two had just announced Bhavna’s pregnancy in May.

“We are so broken that we will never have gotten the opportunity to meet the fourth member of their charming family,” Sarina Patel said.

“Vishal and Bhavna were extraordinary people with the biggest hearts full of compassion and love for all. Those who were lucky enough to have known them have truly been so blessed.”

The Patels had moved to Miami five years ago, and to Champlain Towers South two years ago, according to the Herald.

They knew nothing about the growing questions over the building’s structural integrity at the time, which emerged in 2018 after engineers pointed out evidence of flooding, cracking, corrosion and “major structural damage.”

Rather, they chose the building for its beautiful view of the Atlantic Ocean and its proximity to the beach, an idyllic place to begin their family life together, they thought. And their family did grow: In May 2020, Aishani Gia Patel was born.

“Aishani was the sun that lit up all our lives, she brought so much warmth and happiness upon her arrival. She had a laugh that would simply envelope you,” Sarina told the Herald. Her parents doted on the little girl: “They were the most nurturing parents.”

Sarina Patel told a Herald reporter via text message that the identification has brought her family some peace after more than two weeks of not knowing.

“Their places in our lives are irreplaceable,” she said. “But we are grateful their suffering is over.”