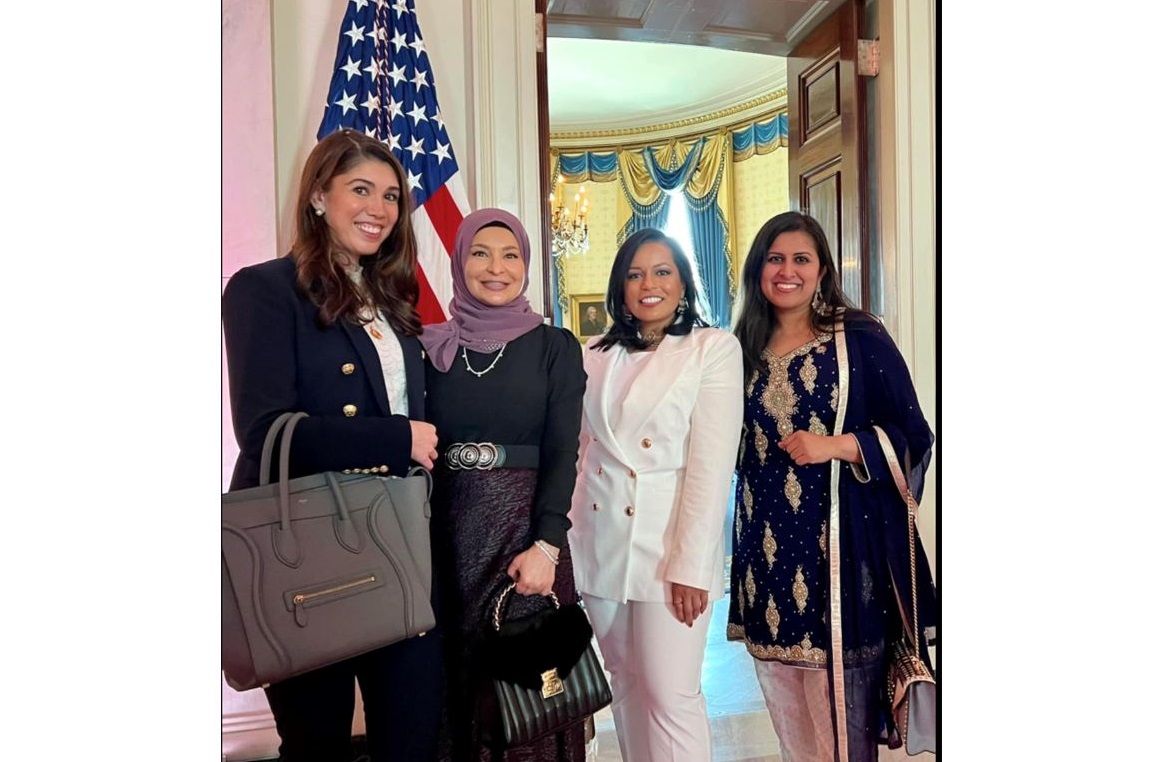 “Dr. Jill Biden welcomed us to The White House and shared beautiful reflections on Ramadan.

President Joe Biden celebrated Eid-ul-Fitr with a grand reception at the White House on May 2. As a presidential candidate, Biden had promised to bring back the Muslim festival to the White House, a tradition dating back to over two decades.

However last year, he was forced to hold a virtual celebration because of the coronavirus pandemic. As in-person celebration returned this time, prominent Muslim Americans, many of them of South Asian heritage, attended the festivities.

Assemblywoman Sadaf Jaffer, who represents New Jersey’s 16th Legislative District and is of Pakistani American heritage was in attendance at the august gathering. She was one of the first Asian American women (along with Ellen Park and Shama Haider) to be sworn in to the New Jersey Legislature last January.

Earlier, Jaffer served two terms as mayor of Montgomery township, New Jersey. She is also a researcher and lecturer in South Asian Studies at Princeton University. Jaffer talks to the American Bazaar about inclusivity at the White House event and about how this sensitive approach is important for America.

AB: Tell us about the White House Eid celebrations. Was it your first time, who were the people you met and what was talked about?

SJ: I was honored to be included in the White House Eid ul-Fitr celebration. It was my first time at the White House and it was truly awe-inspiring to be in such a historic place.

I met with many American Muslims who work in public policy and community organizing. It was wonderful to see the spirit of public service among all the attendees. We mostly talked about the work we are all doing to serve our communities and bring people together for the common good.

AB: Let’s talk about food. Take us through the yummy Eid spread.

SJ: They had a lovely reception for attendees. My favorite items were the lemonade and the lamb kabobs. They also had delicious sweets and South Asian foods like samosas and chana.

AB: This Eid celebrations has to be significant considering former President Donald Trump skipped the event breaking a 20 year long tradition. What would you say to it?

SJ: The Trump presidency was a challenging time for the Muslim community. The White House unfortunately became a source of Islamophobia, anti-Black racism, and anti-immigrant rhetoric coming from President Trump.

In contrast, this Eid celebration was truly joyful and inclusive and showed a White House that welcomes all Americans. Dr. Jill Biden welcomed us to The White House and shared beautiful reflections on Ramadan. This sensitive appreciation of Muslim tradition was well received.

This was the change many of us wanted to see when we worked to get President Biden elected. Political leaders set the tone for society, and we all need to work to build an inclusive society. It doesn’t happen without everyone’s participation.

President Biden discussed how it is important that our government represent the diversity of America. As he noted, “Our differences should not be obstacles that divide us but opportunities to learn from one another.”

Read: Read: Remarks by President Biden at a Reception to Celebrate Eid al-Fitr (May 2, 2022)

AB: Let’s talk about women in the room. Looks like there were many women leaders and also many of women of color?

SJ: There were many women leaders from diverse backgrounds in the crowd including Congresswoman Rashida Tlaib. It is encouraging that the hosts recognized the leadership of American Muslim women.

As we know, we all benefit when women are included in policymaking and leadership. We all need moments to join and celebrate. It is meaningful when the most powerful political leaders in our country acknowledge and include diverse communities in celebrations and in policymaking.

Dr. Talib Shareef highlighted our nation’s motto, “e pluribus unum” — out of many, one. I’m proud that President Biden is putting this motto into practice by hosting events like this year’s Eid ul-Fitr celebration.