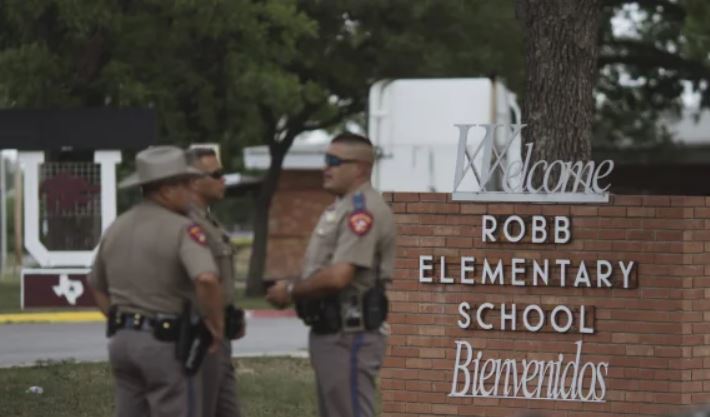 The mind is numb and the heart bleeds. As shocking as it is, the brutal massacre of 19 innocent elementary school children and two of their teachers in Uvalde, a little town in West Texas, on May 24 seems like a routine and periodic occurrence in this almost totally desensitized nation that is otherwise so thoughtful, so caring and charitable.

The most sickening, gut-wrenching irony of fate is that three days after this mindless massacre, as grieving parents bury their ten-and-eleven-year-olds, a gruesome task that a parent should never have to do, the National Rifle Association, the evil enabler of this epidemic of school shootings held its convention in Houston’s George Brown Convention Center.

It is a bizarre scene. Inside, the NRA is shamelessly selling guns and soliciting memberships. Outside, there is a large gathering of protestors and wailing parents under the watchful eye of hundreds of police, some mounted on horsebacks.

In the convention hall, the patriotic tower of integrity and intelligence, Donald Trump, and his apologists like Texas senator Ted Cruz, beneficiaries of the NRA’s largesse are repeating their ludicrous argument of why more guns are required to stop gun violence.

Every American with a modicum of sanity in his mind and humanity in his heart hangs down his head in shame at this repugnant “American Exceptionalism” of uncontrolled gun violence.

No country in the history of human civilization, big or small, rich or poor, developed or not has ever had the kind of gun violence that the US seems to have every other day in some corner of this Land of the Free and the Home of the Brave.

As a first-generation immigrant, I love America. I admire the innovative, can-do spirit of the American people. Americans are problem-solvers.

They thrive on challenge. And they have repeatedly demonstrated that they can collectively solve any problem, be it the defeat of Hitler, or putting man on the moon, or safely rescuing baby Jessica McClure from an abandoned well in the backyard of her family home.

It boggles my mind that this all-powerful country has not been able to make even the slightest dent in the problem of gun-violence and school-shootings that has dogged the nation for decades.

The senseless Uvalde killing was an incredible 27th school shooting in the US just this year. And before that, over the past twenty years, a total of more than 240 children have been killed in various school shootings of which Sandy Hook, Columbine High School and Marjori Stoneman Douglas are the most infamous.

The Columbine shooting in 1999 at Columbine High School in Littleton, Colorado, occurred when two teens went on a shooting spree.

On Feb 14, 2018, Nikolas Cruz opened fire on fellow students, killing 17 and wounding 17 others at the Marjori Stoneman Douglas High School in Parkland, Florida.

School shooting in America is an epidemic like no other. But after each such incidence, there follows an identical script. There will be flowers, balloons, teddy bears and candles in honor of the children.

There will be poignant church services, glowing eloquent speeches, lots of hugs and tears, the police chief will give periodic status reports, politicians will give lofty speeches condemning violence, talking about mental health, promising solutions. Some will go and console the grieving parents and get photographed.

You can interchange this scenario from one shooting incidence to another and nobody will know the difference. Two days later, the nation will go back to its beer, bar-be-que and baseball.

The politicians will resume their junkets. Next week, there will be another shooting. Einstein is said to have defined insanity thus – Insanity is doing the same thing over and over again and expecting a different result.

In Einstein’s mind there would be no doubt about America’s insanity. Political scientists blame the lawmaker’s inaction on the overwhelming influence of the NRA and the US senate’s archaic filibuster law.

Social scientists point to the wide income disparity, lack of education, broken families and absence of role models that lead to mental disorders and creation of assorted misfits in the society who go on to become mass murderers.

And then there is the easy availability of guns and assault weapons for anybody with no training and no universal background checking. The Second Amendment of the US Constitution is the holier than the holiest cow in America.

I think it is anachronic, misinterpreted and misused in today’s context. And the fact is, that American politicians simply do not want to solve the problem of gun violence.

In fairness, there are a lot of sensible Americans who understand the problem, who recognize and support the need for appropriate legislation for gun control.

But there is a clear divide between the supporters and opponents of gun control. This divide makes the US a clear outlier in the civilized world.

Many years ago countries like Australia and the UK enacted strict gun laws after mass shootings of their own. And voila, the problem was effectively eliminated.

In contrast, there is an astounding number of almost 400 million guns in civilian hands in the US, the equivalent of 120 firearms per 100 citizens. That is more than double the per capita gun ownership rate of any other country in the world.

Read: Texas shooting: America is killing itself, as the Republican Party looks the other way (May 25, 2022)

It is estimated that more than 80 million Americans, about 44% of all US households, now own guns. About 40 million guns are sold in America every year. Clearly, these guns take their toll. The eternal optimist in me still believes that there is a lot of good in America.

(Dan Mayur is a world traveler and author of five books. He writes on travel and socio-political issues)