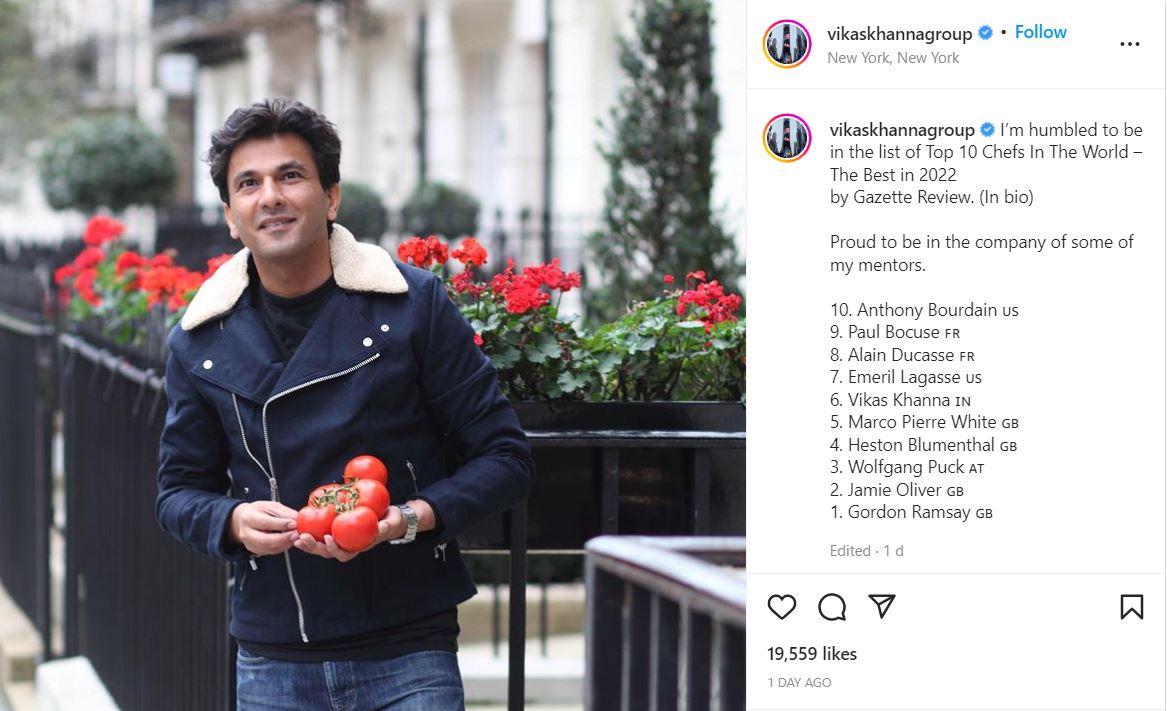 India-born, Michelin star chef Vikas Khanna has become the first and only Indian chef to be listed among the top 10 global chefs in the world by Gazette Review.

Born in Amritsar and based in New York, Khanna is ranked sixth while Gordon Ramsay tops the prestigious list compiled by Minneapolis, Minnesota based Gazette Review.

Khanna took to social media to express his gratitude. “I’m humbled to be in the list of Top 10 Chefs In The World – The Best in 2022,” he wrote on his Instagram handle.

Khanna opened his first restaurant, Junoon, in New York City in 2010, and it quickly earned its first Michelin star the following year.

One of the first Indian chefs to be recognized on a global level, he has cooked and served food to the former President Barack Obama, the Dalai Lama, Pope Francis, Indian Prime Minister Narendra Modi, and many other international leaders and celebrities.

Khanna won hearts when the Indian chef took it upon himself to aid the poor and needy in India through his successful Feed India campaign during the Covid-19 lockdown in 2020.

Khanna is known for creating the most expensive cookbook in the world, ‘Utsav’ which was auctioned at Rs three million ($40,000)

Khanna’s documentary ‘Kitchens of Gratitude’ premiered at the prestigious Cannes film festival. He also produced ‘Holy Kitchens,’ a documentary series that investigates the relationship between faith and cuisine.

In his most recent book, ‘Barkat,’ he narrates his personal journey from his childhood in Amritsar to becoming one of the world’s most loved Indian chefs worldwide.

Khanna made his directorial debut with ‘The Last Color’ in 2020. The film is set in the historic Indian city of Varanasi and explores the life of Noor, a 70-year-old widow played by Neena Gupta, and her special bond with 9-year-old Chhoti (Aqsa Siddiqui).