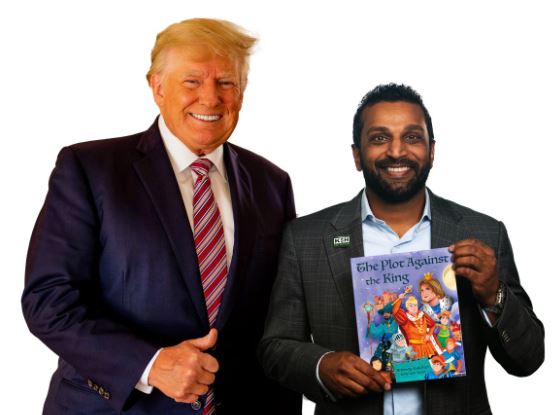 Google temporarily suspended the publisher of “The Plot Against the King” written by Patel, Trump’s Pentagon chief of staff

The fairytale “The Plot Against the King” reimagines a kingdom where the “Russionians” weren’t a factor in the 2016 election.

“Let’s put this amazing book in every school in America,” Trump posted on Truth Social last week, HuffPost.com reported. “Big tech should not get to suppress the truth.”

Conservative publisher Brave Books is presenting the work as both fairytale and fact. It calls the book a “fantastical retelling of the terrible true story.”

“A key player in uncovering one of our nation’s biggest injustices tells the whole story—for kids! Kash Patel …brings a fantastical retelling of Hillary’s horrible plot against Trump to the whole family,” the publisher says.

“Full of fake heralds and keeper Komey’s spying slugs, this is a story of daring and danger. But never fear! Kash the Distinguished Discoverer will win the day,” it adds.

Patel says in his own statement that he believes it’s important for people to know the truth in the fairytale.

The book focuses on an evil plot by mean “Hillary Queenton” and her “shifty knights” to reveal that King Donald was working with the “Russionians” to cheat his way into the Oval Office, HuffPost said.

Patel himself appears in the book as a “wizard” who attempts to prove King Donald was wrongly accused.

The book claims, in fairytale speak, that the discredited dossier on King Donald and the “Russionians” — compiled in real life by former MI-5 officer Christopher Steele — triggered the American intelligence probe into Russian interference in the 2016 election. The book claims that the dossier was “written” by Hillary Queenton and “put in a steel box.”

The book “converts the real-life story of the Russiagate hoax into a humorous tale for children,” according to the publisher.

An Amazon review comment on the book from “DJ-T,” that included the former president’s photo, gushed: “This is the most spectacular children’s book ever! This will be YUGE!”

Google last month temporarily suspended the book publisher from its ad platform for “circumventing system policy,” according to a Google statement to Brave Books obtained by Fox Business.

It was unclear exactly what the publisher did to break the rules. But the Google statement noted that the company “doesn’t want users to feel misled by the content promoted in Shopping ads,” and referred to “promotions that represent you or your products in a way that is not accurate, realistic, or truthful.”

Patel, who served as chief of staff to the acting US secretary of defense under Trump and former chief Russiagate investigator for the House Intelligence Committee under then-Chairman Devin Nunes, later blasted the move as a “witchhunt.”

He suggested that the Google suspension represented an attempt to silence the truth about the “Russian Collusion Conspiracy.”

“Two years ago, the left tried to block the truth about the Russian Collusion Conspiracy, and now they are trying to censor our children from learning the truth,” Patel was quoted as saying by Fox Business.

“I am not going to let that happen,” he added. “Educating our children about the truth must be free of big tech censorship and politically based ideological shadow banning,”