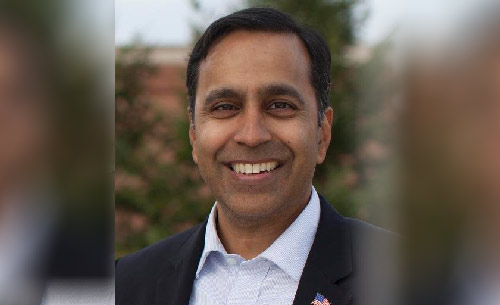 Indian American Congressman Raja Krishnamoorthi has secured the Democratic nomination for US House in Illinois’ 8th Congressional District with a landslide victory over Junaid Ahmed in Tuesday’s party primary.

“I am honored that the Democratic primary voters in Illinois’ 8th Congressional District voted, in an overwhelming and decisive fashion, in support of my re-election campaign for Congress,” said India-born Krishnamoorthi, 49, who received about 70% of the vote.

“My constituents want peace, progress, and prosperity. In Congress, I have fought to grow the middle class, fight for women’s reproductive rights, and combat inflation and increasing gas prices. I will continue to work tirelessly to address these issues in the important months ahead.”

“We now turn our attention to November, where our fundamental freedoms and human rights are on the ballot,” added Krishnamoorthi who has represented the the 8th District of Illinois, which includes Chicago’s west and northwest suburbs, since 2017.

Born in 1973 into a Tamil-speaking family in New Delhi, India, Krishnamoorthi’s family moved to Buffalo, New York, when he was three months old so that his father could attend graduate school.

He serves on the House Permanent Select Committee on Intelligence, the Select Subcommittee on the Coronavirus Crisis, the Committee on Oversight and Reform and as Chairman of its Subcommittee on Economic and Consumer Policy, Vice-Chair of the LGBTQ+ Equality Caucus, Co-Chair of the Congressional Asian Pacific American Caucus Immigration Task Force, and as an Assistant Whip for the Democratic caucus.

Krishnamoorthi previously served in Illinois state government on the board of the Illinois Housing Development Authority, as a Special Assistant Attorney General in the office’s anti-corruption unit, and as Deputy State Treasurer, before becoming president of small technology businesses in the Chicago area.

He earned a bachelor’s degree in Mechanical Engineering from Princeton University, and received his Juris Doctor from Harvard Law School.

Krishnamoorthy and his wife, Priya, a physician, live in Schaumburg with their two sons and daughter.