If you have missed another South Asian face playing a doctor in a TV series, tune into ‘Transplant’. Currently on its season 2 on NBC, the Canadian drama series isn’t just another addition to the fast growing medical series.

What makes, Transplant, an absorbing medical drama is the seamless presentation of the adrenaline rushing hospital scenes along with the emotional story of a refugee family finding their footing in a new world! 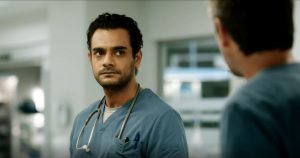 The series follows the story of Dr. Bashir “Bash” Hamed played by Canadian actor Hamza Haq and revolves around the personal and professional challenges of this adroit doctor who must continue to confront his past.

Dr Bash, a Syrian refugee who fled his war-torn country along with his sister to attempt a fresh-take on life, is impressive for his powerful quietude with which he balances his background and his new life.

While medical dramas, complete with their high-strung emotional story line are an in-trend genre, what also makes Transplant a riveting watch for immigrants is how the series intertwines the shared experiences of beginning afresh in a country and the roller coaster ride that follows. Part emotional, part realistic, the journey of playing Dr Bash for actor Hamza Haq was akin to a rite of passage.

Born to Pakistani parents, Haq moved to Canada as a 9-year-old. His dad and mom worked in the service sector, Haq broke the mold and became the first in the family to major in films. He began his career with TV and also made a short appearance in ‘Quantico.’ In 2020 he got the lead role in Transplant.

Just before the season finale, Hamza Haq takes out time to talk to the American Bazaar about choosing a career in TV, growing up an immigrant and more.

AB: Let’s begin with a cliched question first, so growing up as a young boy of Pakistani heritage, was it easy to convince your parents and relatives to opt for a career in acting. Were there any unique challenges or were your parents supportive of your career?

HH: I feel blessed, Alhamdulillah (praise be to God), for several reasons. Firstly I’m the youngest of four kids. My older siblings all did relatively traditional things and especially as children of new immigrants to Canada, my parents weren’t really as open with them as they were by the time it was my turn to go.

We grew up with different versions of our folks and I have to recognize that. My dad has been fully supportive of the dream since the beginning, not without fear, but I was willing to put in a lot of work before ever asking for help so he knew I was serious.

My mother was and is incredibly supportive too but like any mother she was just worried I’d starve so there was a little more hesitation.

Extended family all think my parents are crazy for letting me pursue it so kudos to them for loving me enough to let me jump, though I gave them little choice.

I’m sure we’ve all been subject to substantial gossip within the family but whatever. Plus there was a cultural stigma about how the industry is the devil and all that jazz. They’re not wrong but as far as unique challenges are concerned, that’s been a fun one to navigate as a Muslim.

AB: You have been a part of Quantico too. Anything to say about your experience working there. Did you meet Priyanka Chopra on the sets?

HH: I was in Quantico for the equivalent of a sneeze over two episodes. It was a massive show and I was quivering but it was a fun experience for sure.

My first day there I saw Priyanka Chopra in the distance but actually worked with her on my second day. During the blocking we went over the lines and I think I froze then just passionately expressed to the entire crew how literally nobody in the North American industry realizes what a enormous star she is, how I’d been watching her work since I was 14, and how they’ve yet to see what she’s capable of as an artist.

Quantico is one thing but ‘Fashion.’ ‘Barfi!’ ;Bajirao Mastani’ – the list goes on and on. After that she smiled and shook my hand — “Hi, I’m Priyanka”…. “I know”, I blushed.

Read: Working with Jimmy Kimmel is the honor of a lifetime: Maureen Bharoocha (November 25, 2021)

AB: Transplant is based on a true story of a Syrian doctor trying to find a footing in the West. As a son of immigrants did you see any parallels, were there any aspects you could relate to?

HH: I think the story of displacement and trying to fit in is a universal one. Being a brown man trying to fit into Canada and all the professional, social, political implications of that are something I saw my family struggle with and that I struggle with to this day while trying to maintain or configure my own identity.

Immigration is ultimately a choice and it was a calculated effort made by my parents where being a refugee is a forced circumstance. I’ve always considered it as the difference between choosing to go skydiving and being thrown out of an airplane and finding your chute on the way down.

So there are several aspects of this experience that the majority of us can’t relate to and we should all consider ourselves extremely fortunate that we can’t.

AB: For far too long first generation South Asians who grew up in the West were thought to be torn, even confused about the two worlds. Do you think that perception has changed? Do you feel that the cultural gap that the generations a few decades ago felt has been bridged or it still remains?

HH: I think the gap is permanent and it’s incumbent on us to build bridges. How we build those bridges and where they lead will inform the perception.

I was born in Saudi, a Pakistani and I’ve been living in Canada for almost 23 years and still and always will be an immigrant. A forever hyphenate: Pakistani-Canadian.

Both are home and neither are home and there’s a beauty in that. What’s great is that we have trailblazers who are brave enough to talk about this disconnect.

Riz Ahmed’s ‘The Long Goodbye’ is a masterpiece about this topic and we have amazing actors like Amrit Kaur, Maitreyi Ramakrishnan, and Iman Vellani in the mainstream leading that conversation.

The more I connect to myself the more I’m finding that this personal feeling of a nomadic life is really liberating and a shared experience amongst a great many of my contemporaries.

Thank God there’s actually good roles for us out there now and not just the xyz we’d all grown so tired of by the mid 2010s. Hopefully we’ll be able to make the journey easier for those after us and tell some beautiful stories along the way.

AB: Tell us more about Transplant. How you bagged the role. What was the prep like?

HH: I worked with Joseph Kay on a show called ‘This Life’ where we built my character from the ground up. It landed me my first Canadian Screen Award nomination.

After that I did ‘The Indian Detective’ with Russell Peters for CTV and it did pretty well in terms of domestic numbers. When Joseph started writing Transplant he invited me to be a cultural consultant alongside several Syrian Refugees to get a full balanced character who eventually became Bashir.

I told him immediately I wanted the part but that was just me shooting my shot. When he pitched the show to CTV they loved it and asked if he’d considered anyone as the lead and he named me. They liked it. That was it.

They searched Canada for another few months to cast someone of a Syrian background who could meet the necessary requirements to lead the show and they couldn’t find him.

I work with my acting coach, an Arabic coach, a dialect coach, and bi-weekly medical bootcamps to this day to make sure I do the best job I can to do justice to this part.

Honestly it was timing. If this show was pitched a year earlier, I don’t think it would have been funded. If it was a year later, Joseph couldn’t have been the show runner and I wouldn’t have been cast as the lead.

Yes, I work hard and I’m good at my job but Alhamdulillah for these stars aligning.

AB: Tell us about your future plans. What are your goals?

HH: I want to do everything. I have a thing called an InshAllah (God willing) List that I update frequently which I send to my team. It’s a list of actors, directors, and artists I want to work with, dream roles, scripts I’m writing etc.

I just want to become a really good actor and storyteller. Irrfan Khan is the goal. If on my way there I can be Victor Zsasz in the Matt Reeves Batman sequel, or Hannibal King in ‘Blade’ opposite Mahershala, or in that Riz Ahmed ‘Hamlet’ movie, that would be neat.

Would love to do anything where A.R. Rahman is the composer, or something that films in Japan. It’s a big list. So as far as plans are considered – all I can say is InshAllah.