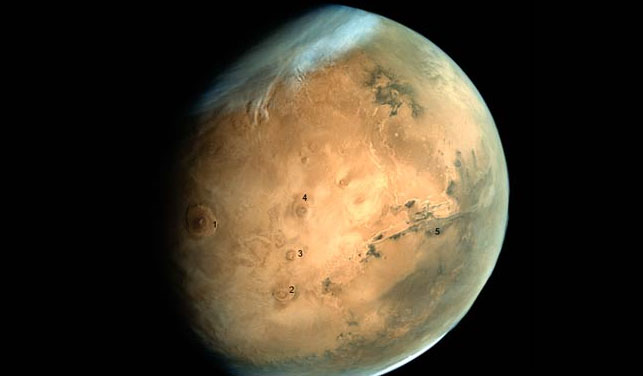 Scientists, after studying the top 300 meters of the subsurface beneath the landing site of InSight near the Martian equator, realized that it contains little or no ice, raising serious questions on the location of water sources on Mars.

Ever since, the data from Insight kept scientists busy with information about the surface, subsurface that might consist of sedimentary rock and lava flows, widening the uncertainties over porosity and mineral content.

“We find that Mars’ crust is weak and porous. The sediments are not well-cemented. And there’s no ice or not much ice filling the pore spaces,” said geophysicist Vashan Wright of Scripps Institution of Oceanography at the University of California San Diego.

Wright and three co-authors, in their publication in Geophysical Research Letters, posed the new question — if ice is present beneath, what form would it be?

It was widely believed that the red planet may have harbored oceans of water early in its history, which could have reached the subsurface in the form of grains of ice. But now findings of Wrights and his team refute the idea.

“If you put water in contact with rocks, you produce a brand-new set of minerals, like clay, so the water’s not a liquid. It’s part of the mineral structure,” said study co-author Michael Manga of the University of California Berkeley. “There is some cement, but the rocks are not full of cement.”

The lack of cemented sediments suggests a water scarcity in the 300 meters below InSight’s landing site near the equator. The below-freezing average temperature at the Mars equator would be cold enough to freeze water, if it were there, they pointed out.

Many planetary scientists have long suspected that the Martian subsurface would be full of ice but now their suspicions are melting away.

There is no liquid water on the surface, so studying the subsurface on Mars remained crucial because if life exists on Mars, that is where it would be, protected from radiation.

Read: Future Mars to get a ring like Saturn after destruction of Phobos (November 24, 2015)

Hopes of water on Mars’ southern pole dry up
In fact, another study in January 2022 suspected Martian underground lake is probably volcanic rock masquerading as water.

Refuting the possible water signature from radar observations made by Mars Express, a European Space Agency spacecraft in 2018, they suggested that the spacecraft was just looking at volcanic rock.

The presence of water doesn’t fit with what researchers have understood about Mars’ southern pole, study lead author Cyril Grima, a planetary scientist at the University of Texas Institute for Geophysics, said.

Mars, a dusty and windy planet, may have ice water locked up at the poles but scientists are still working to determine where and how much water might be there below the red planet’s surface.

Unless the amount of Martian water that could currently exist is determined, our understanding of the possibility of life on Mars remains remote, especially in view of a few manned missions planned to the red planet.