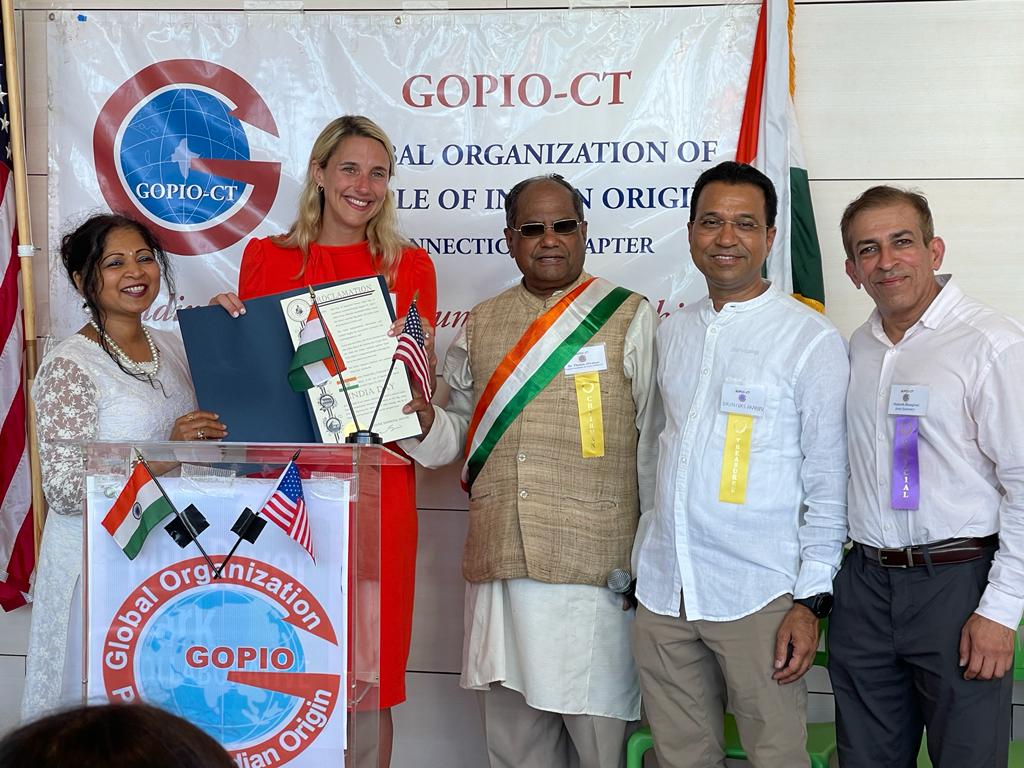 The Connecticut General Assembly has issued a citation honoring India for its 75th anniversary and acknowledging the achievements and contributions made by Indian Americans to the state’s economy especially in IT and technology, healthcare and hospitality.

The state assembly citation as also Stamford city citation were presented at the annual India Day Festival organized by the Connecticut Chapter of Global Organization of People of Indian Origin (GOPIO-CT) at the Mill River Park in Stamford on Sunday, Aug 7, according to a GOPIO press release.

The day-long celebrations began with the hoisting of the American, Indian, and Connecticut flags at the Government Center in Stamford by Simmons. American and Indian national anthems were sung by students of Stamford’s Hindi and Tamil schools.

“Today, we join you to celebrate the rich history and culture along with freedom and liberty with people of India,” it says. “We urge all our citizens to join us in publicly acknowledging the many achievements and contributions Indian Americans have made to the economy of Connecticut especially in IT and Technology, Healthcare and Hospitality. Congratulations on your Independence Day!”

Stamford Mayor Simmons’ proclamation noted that the Indian Independence was marked largely by non-violent resistance and civil disobedience and the Independence Day is celebrated by the Indian Diaspora worldwide. Stamford City will honor Indian community which is an integral part of city’s diversity, success and great future, it added.

After the flag hoisting, an inaugural ceremony was held at the Carousel Hall in the adjacent Mill River Park. Indian arts and crafts, Indian clothing and other items were displayed at the Park giving a glimpse of India’s rich and diverse culture. Vendors served delicious Indian food.

In his welcome address, Chairman of GOPIO International Dr. Thomas Abraham, said, “The India Festival in Stamford, CT is a tribute to a strong and vibrant Indian-American community that has excelled in almost all areas of life in this adopted nation of ours.”

“Through events like the India Festival, we are cultivating and developing community networking with all these younger elected officials,” Dr. Abraham added.

They all praised India, the world’s largest democracy, continuing its path through democratic route and that India and the USA being world’s two largest democracies have common interest to be together with a close relationship.

“The India Festival is a tribute to a strong and vibrant Indian-American community that has excelled in almost all areas of life in this adopted nation of ours,” said Arora.

Norwalk resident Yashasvi Jhangiani was bestowed with Indian Independence Liberty Award for her service to GOPIO for the last dozen years and the larger Indian and American community.

The cultural programs depicted the diversity of Indian culture and traditions. Among those who portrayed the diverse and cultural traditions of Indian traditions included Lakshmi Sujanan. Other groups performed a the event were Thirakte Kadam by Neha Shah, Sindhis of Connecticut, Rajasthani and Punjabi Gidda dances.

As in the previous years, 16 high school graduates were recognized with a certificate and an Amazon gift card. Coordinated by GOPIO-CT Treasurer Mahesh Jhangiani, the program sponsored by investment firm 3Lines and International Museum of the Saree, was compered by Dr. Jaya Daptardar and Nadita Kotian.