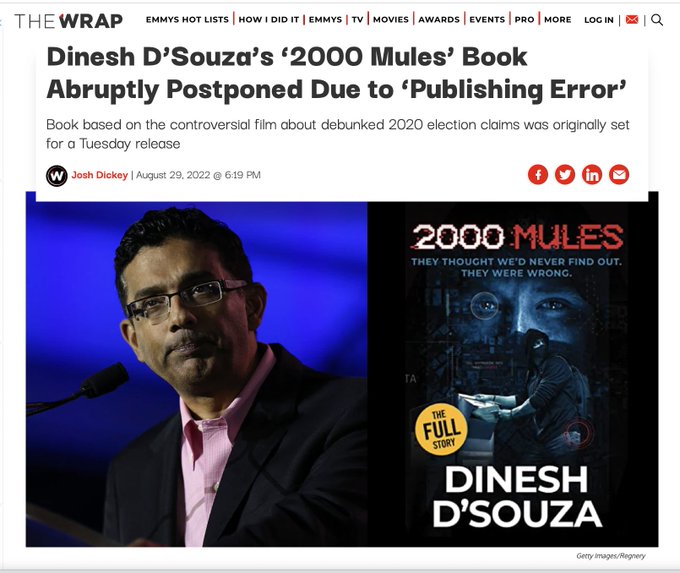 Indian-American right-wing political commentator Dinesh D’Souza’s book version of “2000 Mules,” based on the controversial film about debunked 2020 election claims was abruptly recalled by the publisher Monday, the eve of its release.

Regnery Publishing called the move a postponement due to a “publishing error” and said the book would be released in October, according to the Wrap, an entertainment and media news website. When asked, the publisher did not elaborate what kind of error caused the release to be delayed.

Whatever was deemed a “publishing error” in D’Souza’s book was surely already printed in possibly thousands of copies, however, which would have to be recalled, the Wrap noted.

A Twitter user named Nancy Levine, a self-described author and freelancer, posted screenshots Monday of what she claims were recall notices from book vendors at major retailers.

“NEW: Publisher of @DineshDSouza’s book 2000 MULES has issued a FULL RECALL. I received this image from a book vendor for Walmart. The book’s election fraud premise has been widely debunked,” Levine wrote. “I’ve asked publisher @Regnery why it issued the full recall. Will report. #Publishing,” she posted Aug 30.

Regnery Publishing called the move a postponement due to a “publishing error” and said the book would be released in October, according to the Wrap, an entertainment and media news website.

D’Souza does not list any professional representatives and does not accept messages on social media, according to the Wrap.

“2000 Mules” puts forth a theory that hundreds of ballot-harvesting “mules,” paid by Democrat operatives, were detected using cellphone data that showed their proximity to drop-boxes on Election Day.

The film as released on pay-per-view digital platforms, then began a theatrical run in May that grossed $1.4 million in the United States.

He has written over a dozen books, several of them New York Times best-sellers.

Born in Bombay, D’Souza moved to the United States as an exchange student and graduated from Dartmouth College. He was a policy adviser in the administration of President Ronald Reagan and has been affiliated with the American Enterprise Institute and the Hoover Institution. He became a naturalized citizen in 1991.