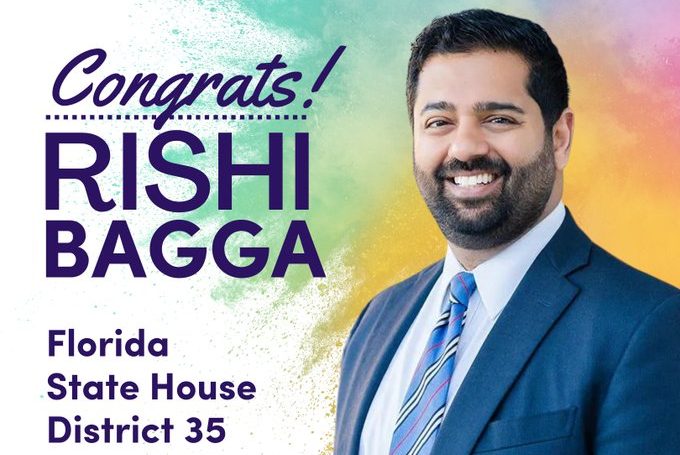 Indian American attorney Rishi Bagga has won the Democratic nomination for a seat in the Florida House of Representatives from House District 35, defeating Navy veteran Tom Keen in a close contest.

Bagga, who moved to the US when he was 10 years old, will face Republican House member Fred Hawkins, who won 52.2% of the vote in his party’s primary, in the Nov 8 election. If elected, Bagga would be the first South Asian American in the state legislature in Florida.

Calling it “a big deal” for the community, Bagga says the growing South Asian American population in the state is not well represented. “And that’s one of the most important reasons why I chose to run,” he added noting, “Our district is 8 percent Asian.”

“It took a few days to count all the votes, but we won! With my wife, Shelly, and our son by my side, we want to thank all of our supporters and volunteers who worked tirelessly to get out the vote. We could not have done it without you!” Bagga wrote on his website.

“It took me 10 years to become a citizen, which I finally did on August 23, 2002. Never could I have imagined that, 20 years later to the day, I would win an election and be the candidate for my party – truly a reaffirmation of the American Dream,” he added.

Bagga is an attorney and small business owner who believes in fairness, justice, and common sense solutions, his website says. As a former prosecutor, Bagga worked hard to fight for justice for victims of domestic violence crimes. He has fought for his clients as an attorney and brought parties together to resolve issues as a mediator.

Through his experience as a small business owner, Rishi understands the importance of growing Florida’s economy while making sure that everyone has a fair chance to succeed, it says.

Bagga lives in the Stoneybrook East neighborhood in the East Orlando/Alafaya area with his wife Shelly and their 23-month-old son, Gyan.

According to his website Bagga believes in: A Smarter Florida – Fully-funding public schools and school safety; A Healthier Florida – Science-based policymaking and expansion of Medicaid; protecting access to contraception and abortion; A Balanced Florida – Investing in a balance between the environment, equity, and economy; and A Prosperous Florida – Diversifying Florida’s economy and higher paying jobs.

The new District 35 was drawn as part of the Florida Legislature’s 2022 redistricting process and includes Eastern Orange and Osceola Counties.