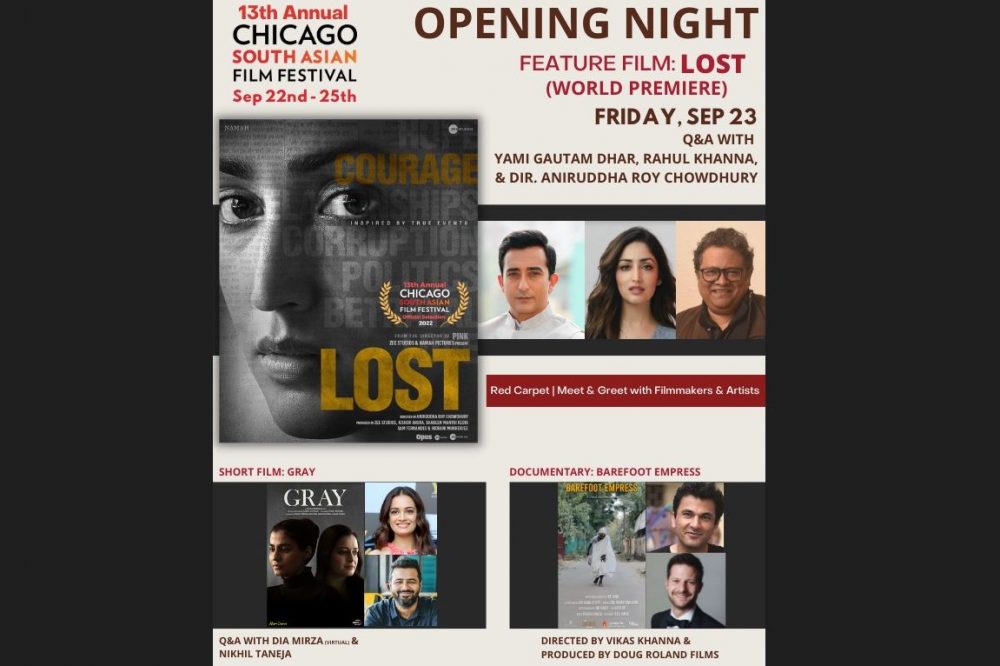 While Indian indie films have been doing the rounds at major film festivals across the globe, it is always special for South Asian cinema buffs to witness festivals dedicated towards movies emerging from the subcontinent.

The Chicago South Asian Film Festival, (CSAFF) now in its 13th year will take place from Sep 22 to Sep 25 and will screen films in two distinct locations in Downtown Chicago — Film Row Columbia College and DePaul University. The curtain raisers will be taking place on Sep 16 and 17 at DePaul University.

Over 125 filmmakers and artists will be making their way to Chicago for this annual festival.

Some of the Indian stars who will be seen at the festival this year are Yami Gautam Dhar, Rahul Khanna, director Aniruddha Roy Chowdhury and Mostofa Sarwar Farooki. The actors will be joining the Opening Night Red Carpet on Sep 23 at Columbia College.

The line up of films this year includes the world premiere of ‘Lost,’ ‘No Land’s Man,’ ‘Four Samosas,’ and the North American premiere of ‘Shiv Shastri Balboa’ as well as several documentaries.

Opening Night will close with the World premiere of film ‘Lost’ by Aniruddha Roy Chowdhury, whose previous film, ‘Pink’ with Amitabh Bachchan and Tapsee Paannu made a mark in Indian mainstream cinema and created discussions around women’s consent.

There will be a special mention of the documentary ‘Barefoot Empress’ by filmmaker and Michelin star chef Vikas Khanna and Oscar winning filmmaker Doug Roland.

The festival will showcase a heart touching short film ‘Perianayaki,’ which centers around the story of a Srilankan woman in New Zealand by Bala Murali Shingade and feature film ‘Four Samosas’ by Ravi Kapoor as Closing Night film.

Shah says, “Our mission at CSAFF is to further diversity and cultural education in Chicago so that young multicultural filmmakers and artists can be given a strong platform to tell their stories and share their art.”

Festival will also showcase local Chicago filmmakers and their films – ‘Before After,’ ‘Trek to the top, ‘Propinquity,’ ‘Ozona,’ episodic ‘Stuck in Reality’ among others.

CSAFF will close on Sunday, Sep 25 with an awards ceremony for best feature and short films.