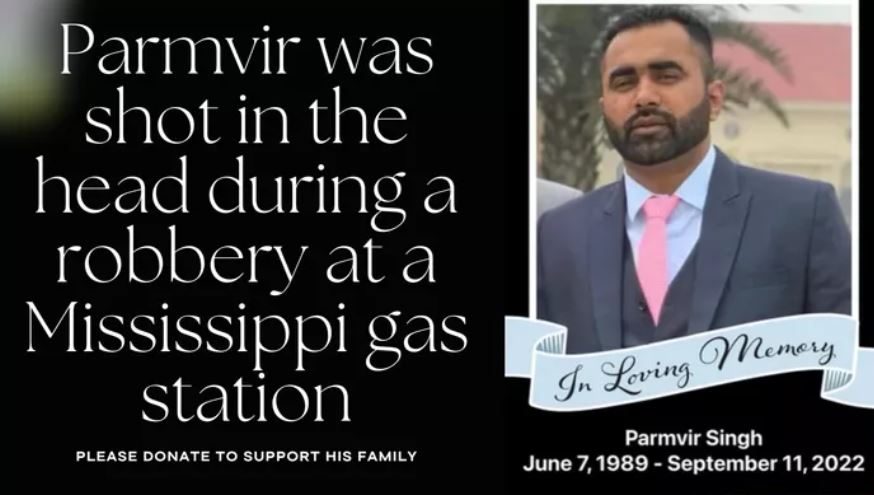 In a gruesome incident, an Indian young man who worked as a grocery store clerk in Georgia has been shot dead in a daylight robbery.

The incident happened when a gun wielding man in a hoodie entered the store while Parmvir Singh, who belonged to Dhapai village in Kapurthala, Punjab was behind the cash counter.

The incident has been recorded on the store video cam. In the more than a minute long clip, a man can be seen shooting the store clerk even though Parmvir offers no resistance and says to the man, ‘no problem,’ and hands over a wad of cash from the counter.

Despite this the robber turns around and even though Parmvir was sitting on the floor as told by the robber, he shoots him from behind point blank. Parmvir falls on the floor.

Singh, 33, was carried to the North Mississippi Medical Center emergency room. He was pronounced dead about six hours after he was shot.

Chris Copeland, 26, of Moore Avenue, Tupelo, has been formally charged with capital murder in the case and has been ordered to be held without bond.

Parmvir had gone to the US only a little over a year ago to make a better life for himself, Friends and family describe Parmvir as a humble man who used to reach his workplace every morning on his bicycle.

His old parents live in Kapurthala. His father Hardyal Singh is back in Punjab and mother Sukhwinder Kaur is the sarpanch of Dhapai village in Kapurthala. Both aged parents are heartbroken having lost their only son.

A fundraiser has been started to help the deceased’s family with the debts as well as the expenditure of bringing his body back to India.

The fundraiser was also shared by Japnit Singh who is a social activist and political candidate from New York.