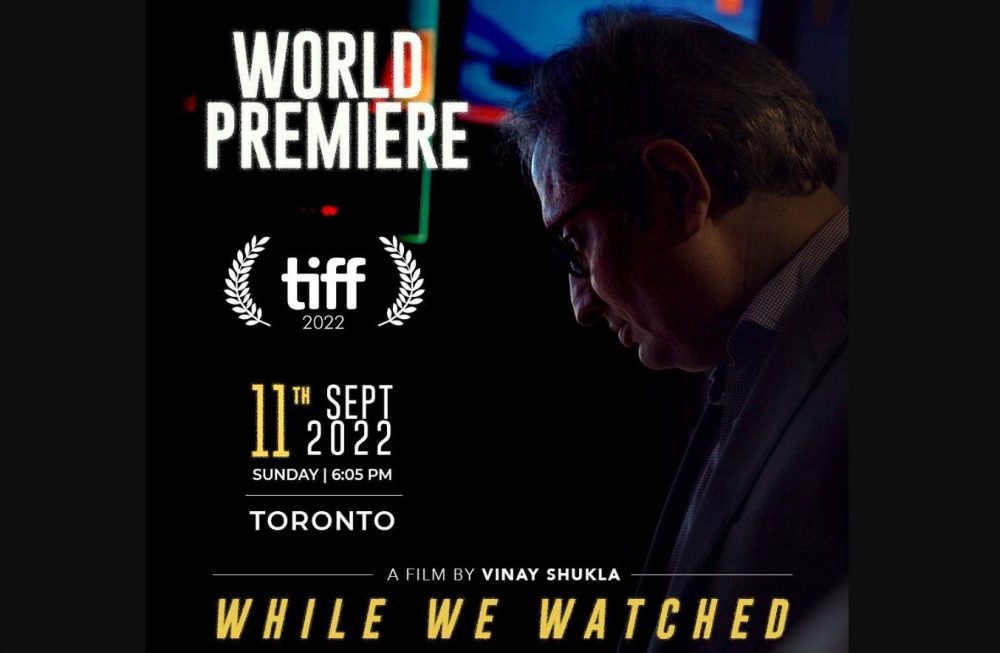 Filmmaker Vinay Shukla’s new feature, the turbulent newsroom drama won the ‘Amplify Voices Award’ at the festival. ‘While We Watched’ is Shukla’s second film to have its World Premiere at TIFF after his much-acclaimed debut feature, film ‘An Insignificant Man.’

The film won a historic censorship battle, was hailed at film festivals around the world, and became a runaway success in theatres.

Titled ‘Namaskar! Main Ravish Kumar’ in Hindi, ‘While We Watched’ intimately chronicles the working days of broadcast journalist Ravish Kumar, as he navigates a spiraling world of truth and disinformation.

Through the lens of its protagonist – a man clinging onto integrity even as everything falls apart – ‘While We Watched’ urges the viewer to consider their own responsibility and culpability as news and media come under greater scrutiny than ever before, Shukla’s upcoming film delivers the promise of a bold, timely, and globally relevant documentary.

The film received standing ovation at the end of each screening at TIFF. The 94-minute documentary in Hindi-English language is a UK production and is produced by Lone Studio and Britdoc Films.

The director Shukla reflects on the film, “Journalists are the foremost storytellers of our time. I spent two years in Ravish’s newsroom, watching him build his daily broadcast. Ravish and his team would get some stories right, some stories just about.”

“Watching him, I realized that for every report that we see on the news, the journalist behind the report pays a cost – an emotional, financial, ethical and mental cost. No story is easy, every story is personal.”

“This film is about that personal cost that journalists pay to do their job right. My film would apply to any journalist who has stood their ground and chosen to file a story which was true to their beliefs. This film is my love letter to journalism,” says Shukla.

One of the film’s producers, Luke W Moody, remarks, “In this moment we’re seeing a new wave of truth and what we understand to be news being manipulated globally to serve the dangerous power of the few.”

“Who will speak up for truth and debate in the dark noise of propaganda? Vinay’s film is a dignified, stirring lens into that abyss and a call to recognize what we might lose while we watched,” he says.

Kumar has become a regular fixture, beaming from TV sets and widely shared phone videos. His primetime news bulletin has long been characterized by solid research, verified evidence, vignette-style notes from the field, and a sharp commentary with a touch of rustic sass.

The feature shows how as press freedom further disintegrates and self-censorship becomes the new normal, Kumar struggles to stay afloat in the rising tide of his own network’s financial hardships, sinking TRP ratings, and the strain of continuous downsizing.

The dangerously deteriorating standard of public discourse finds Kumar at the receiving end of harassment, intimidation, morphed images, threats to his life and even violence against his family.

With a growing target on his back, and the looming threat of his network’s imminent closure, Kumar transforms from a spunky troublemaker into a deeply troubled man, worried for himself, his family, and the soul of his nation.

Thom Powers, Film Programmer TIFF & Miami FF says, “While We Watched is essential viewing for anyone interested in how television journalism is under threat.”

“Although the film is rooted in India, its depiction of misinformation eroding fact-based news could apply to any number of countries from Russia to the United States,” he says.