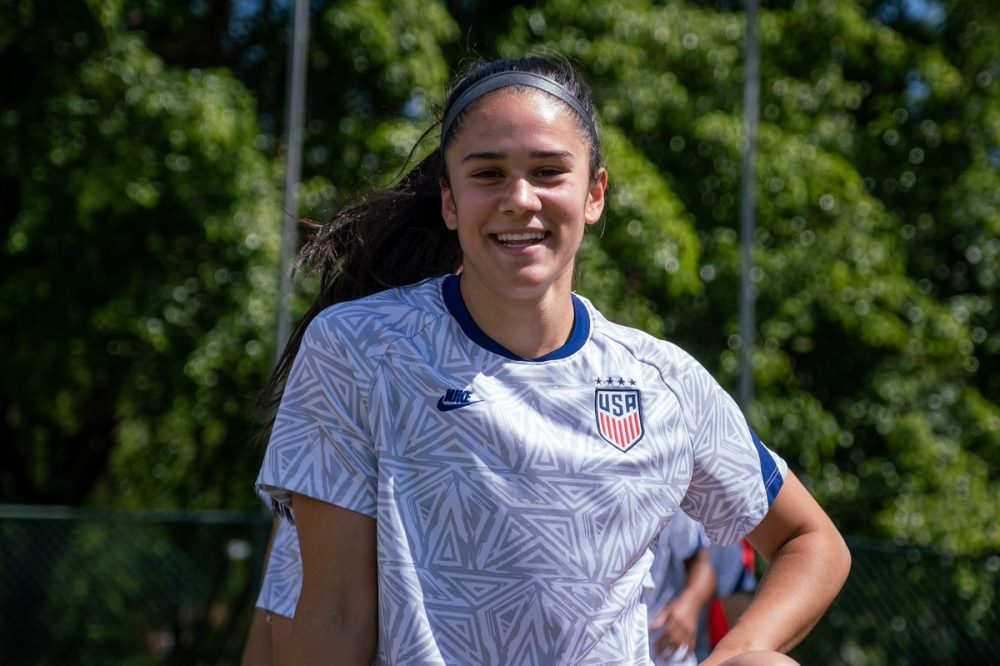 Pennsylvania teen Mia Bhuta, who has just made history as the first Indian American to play for the US team at a FIFA World Cup game, never loses sight of her goal to inspire young Indian girls.

The daughter of an Indian father and an American mother grabbed headlines and scored arguably the best goal of the 2022 FIFA U-17 Women’s World Cup in Bhubaneswar on Oct 12, according to ESPN.

The 16-year-old Pittsburgh native, who scored the eighth and final goal in the 62nd minute to help US beat her father’s native country 8-0, also wants “to champion better things for women’s football, be an ambassador for the game.”

“India has so much potential. There’s so much talent here. The world needs to invest in them more,” Mia was quoted as saying. “They need to believe in young girls and give them the opportunities to succeed. And I think they can go really far.”

Among the congratulatory messages pouring in there was one American soccer star Megan Rapinoe on social media. “Yeah, that was crazy. She’s someone that I’ve always looked up to. She’s an incredible player, so I look up to her for her abilities on the field,” Mia told ESPN.

Like Rapinoe, the world is waking up to Mia’s incredible story, which began with Vyom Bhuta, her father, leaving Rajkot for the US at the age of 16, pursuing a tennis dream and better educational opportunities as an exchange student, initially in New York, according to ESPN.

Vyom later went to Mercyhurst, Pennsylvania, for college, where he met Mia’s mom, who was from Pittsburgh. Decades later, Mia’s parents were in the stands screaming as their daughter scored in India, against India.

“They’re one of the main reasons why I’ve been able to make it here. They’ve sacrificed so much for me to be here, and honestly, if it wasn’t for them, I know I would not be here. My parents have done so much just to help with my development,” Mia was quoted as saying.

But amidst all the congratulatory messages that blew up Mia’s phone following her strike, she holds dear the messages from young Indian girls, who’ve let her known she’s inspired them, according to ESPN.

And she’s been inspired too. Inspired to ask the world to do better for women’s football, saying, “We’ve seen in a lot of countries that girls don’t have the same opportunities to play sports.”

“So first off, it’s a call to everyone else around the world that, hey, we need your support,” Mia told ESPN. “In the past, we’ve seen women have a large impact on their families, but I think now we’re starting to have a significant impact on society and we have a larger scope of influence.”

Read: Bend it Like Bhuta: Meet the First Indian American in the U.S. Team for FIFA World Cup (October 14, 2022)

“So when I play, I hope to encourage young girls to continue to believe in themselves and know that with hard work they can achieve anything.”

After this World Cup, Mia plans on heading off to Stanford (enrolling a semester early), but doesn’t want to turn pro yet. “I really do value my education, so that’s kind of what’s up next for me,” she says.