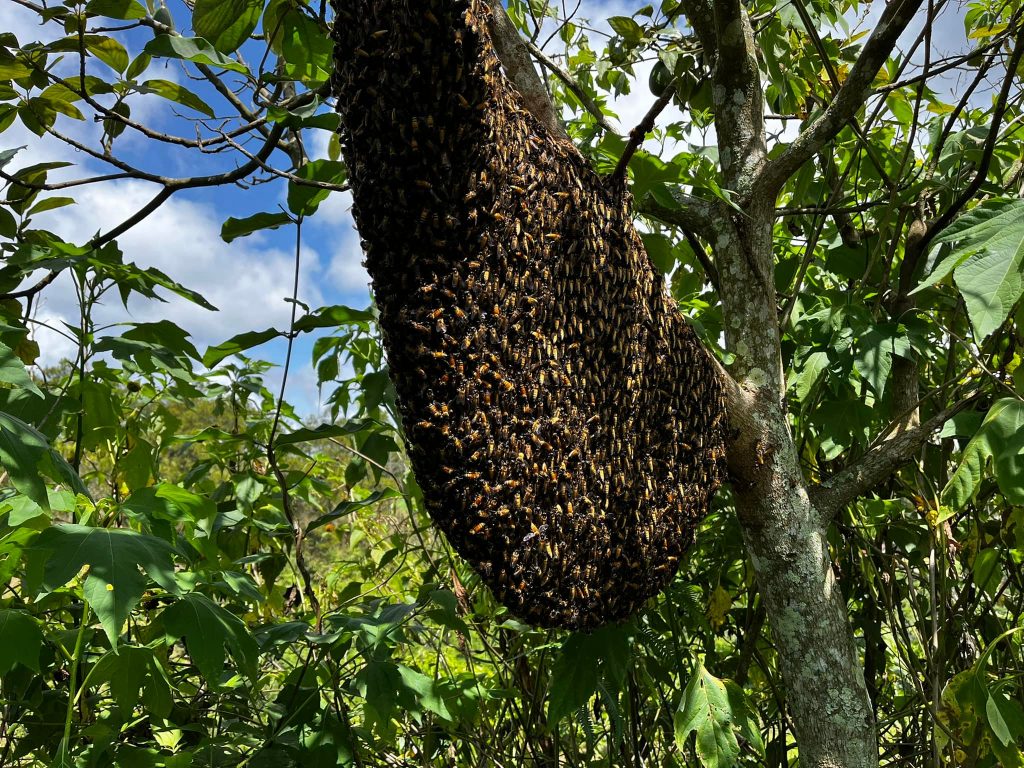 A dense swarm of bees has about eight times higher electric charge than a thunderstorm, according to researchers

A team of British scientists found that the swarming honeybees can produce as much atmospheric electric charge as a thunderstorm cloud, though the question of harnessing it may remain a big challenge as was Benjamin Franklin’s kite experiment in 1752.

Compared to thunderstorms and other weather events with the bees’ highest charge, the researchers found that a dense swarm of bees had a higher electric charge that was about eight times greater and six times greater than an electrified dust storm. The bees most likely acquire their charge through the friction they face during flight.

As the honeybee hive swarms change the atmospheric electricity by 100 to 1,000 volts per meter, more than the electric field force that is normally experienced at ground level rather than in the air, the scientists developed a model to predict the electrical influence of other species of insects.

The research, published in the journal iScience, shows how this type of electricity can shape weather events, help insects find food, and even airlift spiders to migrate easily.

“How insect swarms influence atmospheric electricity depends on their density and size,” co-author Liam O’Reilly, a biologist at the University of Bristol, said.

“We also calculated the influence of locusts on atmospheric electricity, as locusts swarm on biblical scales, sizing 460 square miles with 80 million locusts in less than a square mile; their influence is likely much greater than honeybees.”

However, harnessing energy from these swarms may be remote as it would take about 50 billion bees to light one LED bulb but nonetheless, they can increase the background atmospheric electric field two to 10 fold.

“This makes it the first report of biology as a source of biogenic space charge, which can be as relevant as physical phenomena such as clouds,” O’Reilly told the media.

Ancient findings
In fact, the knowledge of electricity from living beings was known to many ancient civilizations ranging from the Greeks to Romans to Arabic naturalists and physicians. Some Egyptian texts dating from 2750 BCE mentioned some catfish as the “Thunderer of the Nile,” as they deliver electric shocks when touched.

It was used as a medical solution to get patients with ailments such as gout or headache touch them to get the powerful jolt that might cure. Later, researchers went on to find the link between magnetism and electricity.

Ancient Mediterranean cultures used rods of amber, rubbed with cat’s fur to attract light objects like feathers, which made Thales of Miletus observe amber magnet as static electricity around 600 BCE.

The discovery of electrical fields was finally made after Benjamin Franklin’s famous kite experiment in 1752 that demonstrated the connection between lightning and electricity.

Contrary to the popular myth, Franklin’s kite was not struck by lightning as it would have burnt him alive. Instead, the kite picked up the ambient electrical charge from the storm, explained scientists.

“We study how different organisms use the static electric fields that are virtually everywhere in the environment,” says the current study’s main author Ellard Hunting, a biologist at the University of Bristol.

Hunting gives the example of flowers, which have an electric field and bees reach out to them after sensing these fields. This electric field can change when it has been visited by a bee, and other bees can use that information to see whether a flower has been already visited or not.

So do the trees. They create an increased electric field in the atmosphere, which spiders can use to take off and balloon, leveraging it to migrate to farther distances, explains Hunting.

“We only recently discovered that biology and static electric fields are intimately linked and that there are many unsuspected links that can exist over different spatial scales, ranging from microbes in the soil and plant-pollinator interactions to insect swarms and the global electric circuit,” says Hunting.

The major challenge now is to determine whether these dynamics induced by insects affect weather. Understanding electric charge in the atmosphere can answer questions in fields beyond physics, including how and why dust particles can be found thousands of miles away from the Sahara Desert, insist the authors.

“The true implications of this remain speculative, and whether these dynamics induced by insects affect weather is definitely worth investigating,” said Hunting.