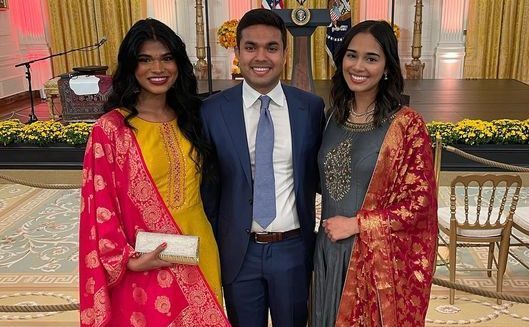 The trio, Dip Patel, Pareen Mhatre and Athulya Rajakumar were representative of tens of thousands of young people who came to the US with their parents on dependent H-4 visas, but face deportation on turning 21.

Biden’s invitation to the Indian kids was seen as a show of solidarity with what are known as the Deferred Action Legal Childhood Arrivals (DALCA) kids. A majority of over 200,000 such aged out people in the US are from India.

Thanking Biden for the gesture, the trio said they were “delighted to join” the President and Vice President at the White House.

“We were honored to be with the President and Vice President among many Indian American leaders for this Diwali celebration. We hope that light will come for all of us by the end of the year through a solution to end aging-out for all children of long-term visa holders,” they wrote on the Facebook, “Wishing everyone a Happy Diwali!”

Patel is the founder of ‘Improve The Dream’ organisation which aims to bring awareness to Documented Dreamers, children who have grown up in the United States as child dependents of long-term visa holders, but face self-deportation after aging-out.

Many Americans are not aware that it is possible for an immigrant child to grow up in the United States with a documented status, but still have no clear path to citizenship, he says.

“Efforts to protect Dreamers, such as DACA and the proposed Dream Act have historically excluded Documented Dreamers, only because of the *requirement* for applicants to be undocumented,” Patel notes.

“These forgotten dreamers are children who were brought to the United States as child dependents of small business investors and high-skilled workers, primarily on E2 or H4 visas,” he says.

“Due to some visas, such as the E2 visa, not having a path to citizenship, or other visas having long backlogs for a green card, these young dreamers must “self-deport” and leave the country at 21, even if they have spent all of their lives here,” Patel says.

‘Improve The Dream’ suggests a solution: Permanently end aging-out and ensure all future action addressing Dreamers allows children who maintained status to qualify if they meet all eligibility criteria, except the ‘requirement’ to be undocumented.

“Diwali has always been a cherished festival for me and my family. I am so honored to be able to advocate on behalf of ‘Improve The Dream’ and help bring light to our cause. It was a surreal feeling meeting South Asian trailblazers at the White House to celebrate the festival of lights that is so close to our hearts,” Mhatre said.

“We feel honored to have been recognised and invited by President Biden and his administration to this year’s magnificent Diwali celebration,” Rajakumar said. “Our presence here shows that the President and the administration have heard our stories and they care.”