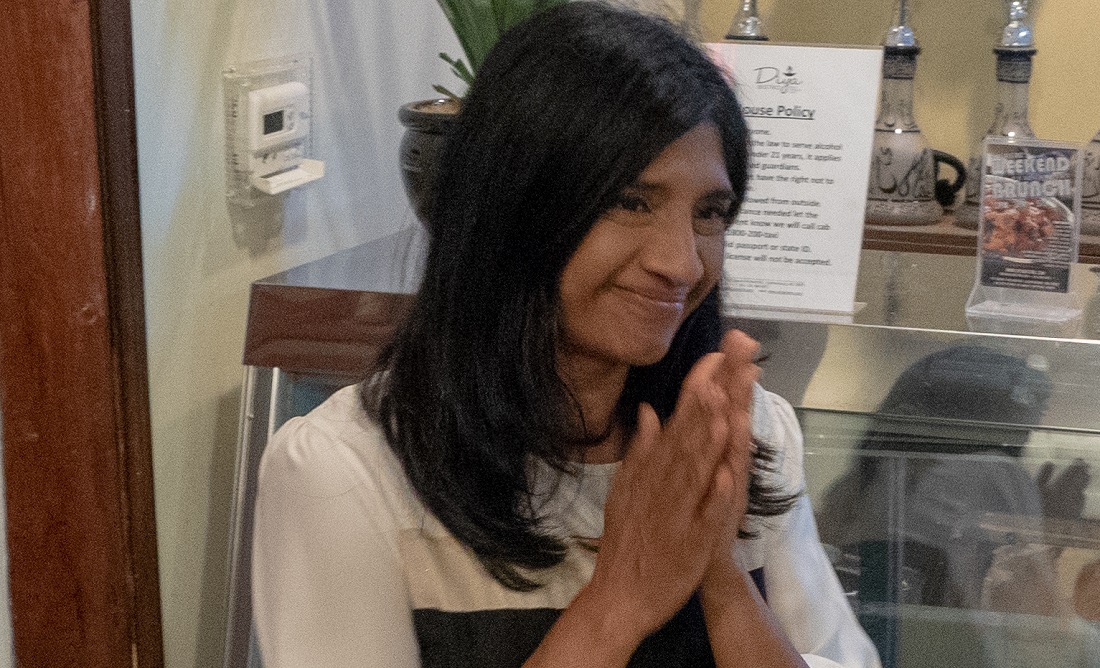 Miller has been dogged by allegations of favoritism and political allegiance to Hindutva.

Over the past year, there has been an increasing sense of alarm that Maryland’s Democratic candidate for Lt Governor, Aruna Miller, is not as committed to our state’s values of religious tolerance and pluralism as our diverse state requires of our public servants.

In particular, Miller has been dogged by allegations of favoritism and political allegiance to Hindutva, a virulently anti-tolerant political ideology with roots in fascism and racial supremacy.

Miller has denied these allegations, however an extensive review of her donor records, public statements and documented attendance of numerous Hindu nationalist events over the course of her career prove otherwise. Aruna Miller must be held accountable.

Some observers claim that Hindu nationalism (known as “Hindutva”), is deplorable, but nowhere near as dangerous as white supremacism. This is simply untrue. First, the founders of Hindu nationalism were influenced considerably by Nazism, as is well documented by Holocaust academics.

Second, the Modi regime has abused its governance over hundreds of millions of world citizens through the use of weaponized rape and massacres in implementing their far-right nationalist ideologies. Finally, Hindu nationalism actively targets Muslims, Christians, Dalits, and caste-oppressed Hindus as victims of their project to “Hinduize” India on their own authoritarian terms.

Moreover, Hindutva is linked directly to hard-right groups, as is evidenced not only in the Trump-Modi Howdy Modi Houston event but also Aruna Miller’s September fundraiser which was co-hosted by the leaders of Muslims for Trump and Sikhs for Trump.In other words: Aruna Miller’s embrace of Hindu nationalists and the Hindutva movement is just as much of a threat to our democracy as any other alt-right or fascist group.

A pattern of dishonesty

Miller’s social and financial ties to Hindutva expand across her entire political career. A recent article in The Intercept exposed how Miller has been courting Hindu nationalists for years, as well as the lengths to which she will go to gaslight her critics.

Aruna Miller’s long-standing relationship with Hindu nationalists has manifested into actions supporting the Hindutva agenda. Miller wrote a letter of support for the Hindu America Foundation’s campaign in California to modify the educational curriculum  and she participated in a Brand India event, where prominent Hindu nationalists were the chief organizers, right before Narendra Modi’s rally at Madison Square Garden in New York City. At that event, she went on record to describe Modi (the world’s leading Hindutva figure), as a “rock star”.

The impact of Miller’s sustained courting of fascism has contributed to Hindutva encroachment into the American educational and cultural system, at the expense of our country’s diversity and pluralism.

During the primary, the Moore-Miller campaign published a statement on their website in response to our campaign saying that they have not taken “one dollar from the Hindutva.” They used this same line during a meeting with several local affinity donor groups known as the “Maryland Muslim Councils.”

The irony is that the Muslim Councils meeting occurred just a week after the high roller fundraiser where major Hindu nationalists, in addition to the leaders of Sikhs for Trump and Muslims for Trump were in attendance. It is as if Aruna Miller believes that if she keeps repeating the lie that she has no ties, financial or otherwise, to dangerous anti-democratic extremists, that we will eventually believe her.

Unfortunately for Miller, legally-mandated financial disclosures to both the Federal Election Commission and the Maryland Board of Elections show the world that Miller has taken tens of thousands of dollars from Hindutva leaders and activists living across the country. Again and again Miller’s character and moral fitness are challenged by her inability to tell the truth about who her supporters are, and why she has chosen to so vigorously embrace Hindutva.

Aruna Miller has clearly demonstrated that she is not trustworthy nor fit to represent the values of the Democratic Party and Marylanders. Party leaders need to break their silence and call on her resignation, should the Moore campaign prevail on election day.

(Gayatri Girirajan is the Representative for South Asian Affairs with Peace Action Montgomery.)